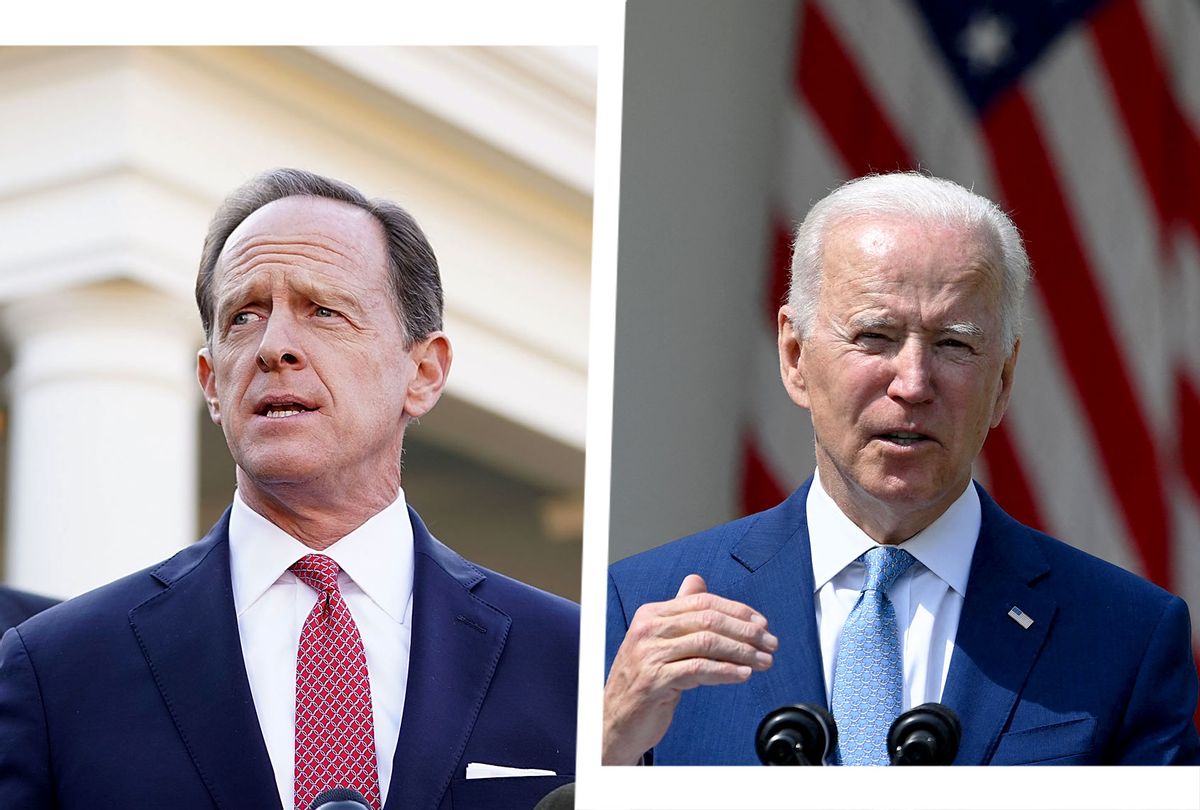 After calling on Congress to swiftly enact an assault weapons ban last week, President Joe Biden followed up his push for increased gun control on Thursday, announcing a set of new executive actions on guns.

"Nothing I'm about to recommend in any way impinges on the Second Amendment," Biden said, noting that "no amendment to the Constitution is absolute."

So far, it looks like Biden's gambit of putting intense pressure on lawmakers to respond to the staggering string of mass shootings in recent days might be working.

"President Biden's expressed willingness to work with both Republicans and Democrats to achieve this goal," Republican Sen. Pat Toomey said after Biden's speech. Toomey, who is retiring after his term ends in 2022, said: "If done in a manner that respects the rights of law-abiding citizens, I believe there is an opportunity to strengthen our background check system so that we are better able to keep guns away from those who have no legal right to them."

Biden said he asked the Justice Department (DOJ) to propose within a month a rule to stop "ghost guns," which are "kits" people can buy legally to assemble a functioning firearm that does not have a serial number. He gave the agency two months to draft a rule on tools to make handguns more accurate, such as braces. Biden added that his administration would also look at so-called "red flag" legislation and issue a report on the prevelance of gun trafficking.

"I don't need to wait another minute –– let alone an hour –– to take common-sense steps that will save the lives in the future," Biden pled in a White House speech last week. "And I urge my colleagues in the House and Senate to act."

"We can ban assault weapons and high-capacity magazines in this country once again," the President continued, "I got that done when I was a senator. It passed. It was the law for the longest time. And it brought down these mass killings. We should do it again."

White House press secretary Jen Psaki told reporters that the President is "considering a range" of executive actions to curtail gun violence -– a promise Biden made during his campaign but has been put on the back-burner delayed as a result of the coronavirus relief bill.

Vice President Kamala Harris echoed Biden Wednesday on CBS to dispel common Republican talking points designed to scaremonger around the issue. "I believe that it is possible…that people agree that these slaughters have to stop," she said. "Stop pushing the false choice that this means everybody's trying to come after your guns. That is not what we're talking about."

President Biden did not comment on the details of any attacks but claimed he had spoken with Gov. Jared Polis of Colorado, Attorney General Merrick B. Garland and the F.B.I. director, Christopher A. Wray regarding the incidents before heading to Ohio to promote his Covid relief plan with Ohio Gov. Mike DeWine.

The House recently passed two gun restriction bills: one that extends the window of time to complete a background check in advance of a gun sale and another that extends background checks to all sales and transfers. Sen. Joe Manchin, D-W.Va., stated, however, that he did not support the measures because they do not make proper exemptions for individuals that privately know one another.

"I come from a gun culture. I'm a law-abiding gun owner," Manchin said. "I'm still basically where Pat Toomey and I have been: The most reasonable responsible gun piece of legislation called Gun Sense, which is basically saying that commercial transactions should be background checked."

A gunman recently opened fire in a Boulder, Colorado grocery store, killing ten people, including one police officer. The shooting came days after any fatal massacre in which eight were murdered at the hands of another gunman in Atlanta. Another mass shooting occurred in South Carolina on Wednesday. The recent string of shootings has reignited debate around gun control that has since been less active amid the pandemic, which saw a sharp abatement in the prevalence of mass shootings.

President Biden, long a bastion of gun control legislation, has a frustrating history with the issue. In 2012, following the Sandy Hook shooting, Biden was tasked with establishing a legislative package of gun control measures under former President Barack Obama. Biden also called on the Senate in 2018 to crack down on gun sales following the Stoneman Douglas High School shooting in Parkland, Florida, pleading to Congress for "common-sense steps that will save lives in the future." However, neither of the incidents amounted to significant legislative change due to Congressional pushback.

According to a Reuters poll, nearly 70 percent of American support the implementation of "Strong or moderate '' federal gun restrictions. White House senior adviser Cedric Richmond told CNN on Tuesday that The President hopes to mobilize public support around the issue. "I think that the will of the people ... will create the demand. We will help lead that and we will help to pass it," Richmond said. "The President feels very strongly that he is not going to sit back and watch people get mowed down in the streets without trying."