NRA head slapped down by judge for not answering questions — and $60,000 law firm bill for "Russia" unexplained 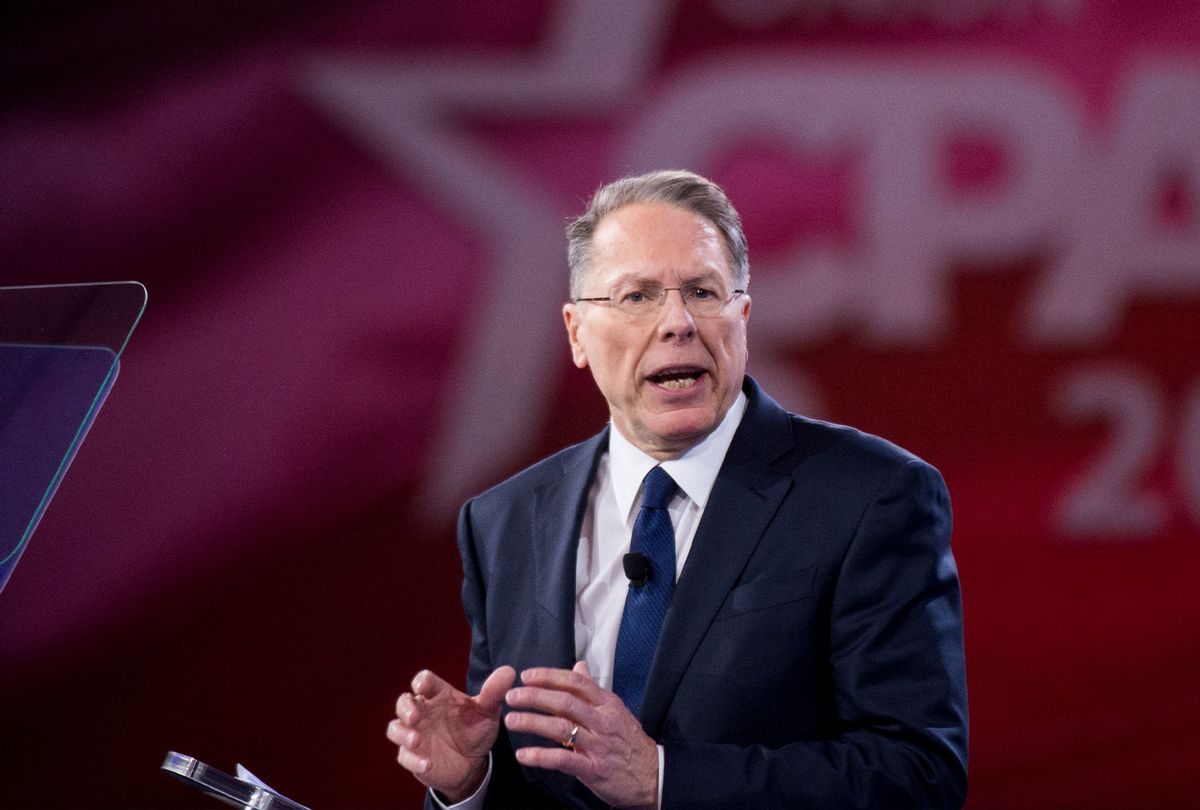 National Rifle Association head Wayne LaPierre, on the virtual witness stand during the third day of the group's highly anticipated bankruptcy trial in Texas, was peppered with a harsh line of questioning, including one about a $60,000 invoice marked "Russia."

In Wednesday's testimony, the NRA's longtime executive vice president "conceded that he did not inform several senior NRA officials that he would file his bankruptcy petition before he did so, including a board member who would have been his successor," Law & Crime reported. "LaPierre also testified that he did not inform board members about the establishment of a company Sea Girt, LLC, which he formed in Texas for the purpose of filing for bankruptcy."

LaPierre was also asked about his use of a yacht owned by Hollywood producer Stanton McKenzie, which LaPierre admitted to using for vacations in the Bahamas, while not making clear in the group's paperwork that the trips could be construed as a conflict of interest. LaPierre was asked if he offered to pay for using the yacht and responded, "I did not," according to Law & Crime.

LaPierre testified on Wednesday that he also took a couple of trips on another yacht called the Grand Illusions, and he acknowledged that McKenzie picked up the tab on his stay at an Atlantis resort. Before the COVID-19 era, LaPierre testified, he flew out to Los Angeles to meet up with McKenzie at Beverly Hills and staying at a hotel there paid for by the producer. The NRA's ex-longtime PR firm Ackerman McQueen picked up the tab on nearly $300,000 for LaPierre's Italian suits at Zegna in Beverly Hills, which LaPierre defended as an expenditure the firm recommended for his television appearances.

This yacht was the same yacht which in an earlier deposition LaPierre admitted to using as a getaway following mass shootings in the U.S. such as the Sandy Hook massacre in Connecticut in 2012.

"Is it true you send no emails?" Sheehan asked.

"Is it true that you send no texts?" the attorney continued.

Before LaPierre's testimony, John Frazer, the NRA's general counsel, fielded a stringent series of questions from Emily Stern, an assistant to New York Attorney General Letitia James, which resulted in the NRA lawyer claiming that "he did not know" the NRA planned to sue its longtime public relations firm, Ackerman McQueen, according to Law & Crime. Ackerman McQueen has now joined forces with the New York attorney general's office in opposition to the NRA, after a bitter lawsuit left the PR firm and the NRA at odds with each other after working together for years.

Questioning from Ackerman McQueen's attorney Mike Gruber revealed that a law firm had filed a $60,000 invoice with the NRA, with the accompanying memo line "Russia." Gruber "pressed Frazer on the NRA's position that the group had to file for bankruptcy in Texas because of a weaponized regulatory framework in New York. Gruber noted that the allegations are currently before state and federal judges in New York, whose fairness the NRA has not questioned," Law & Crime noted.

"If the courts aren't weaponized against the NRA, what's the issue?" Gruber asked.

Gruber's questioning revealed that the Brewer law firm billed the NRA in an invoice charging $59,155.25 for the line item "Russia" in 2020. Before the charges could be fully explained, an objection on the ground of confidentiality struck the matter from the court record. Russian agent Maria Butina's attempts to infiltrate the NRA led to a string of embarrassing headlines for the gun group, during her prosecution and eventual deportation from the United States in 2019.

The Butina scandal would later lead to a September 2019 U.S. Senate that the gun rights organization had acted as a "foreign asset" on behalf of the Russian government during the 2016 election campaign.

This day of proceedings was characterized by those coving the trial as tense, as LaPierre repeatedly "tried to insert justifications for expenditures which Sheehan elicited in his questions." The trial judge "repeatedly sustained motions to strike answers, and LaPierre's lawyer reminded him that he will have the opportunity to make those remarks at a later time."

On Thursday, LaPierre took to the stand again, only to have the judge scold him for not responsively answering questions.

Judge Hale again cautioning NRA chief Wayne LaPierre to stick to responsive answers: "Do you understand that I've asked you that more than a dozen times over the last day?"

Zachary Petrizzo is a staff writer at Salon. He previously covered politics at Mediaite and The Daily Dot. Follow him on Twitter @ZTPetrizzo.