How plastic pollution threatens our health, food systems, and civilization itself 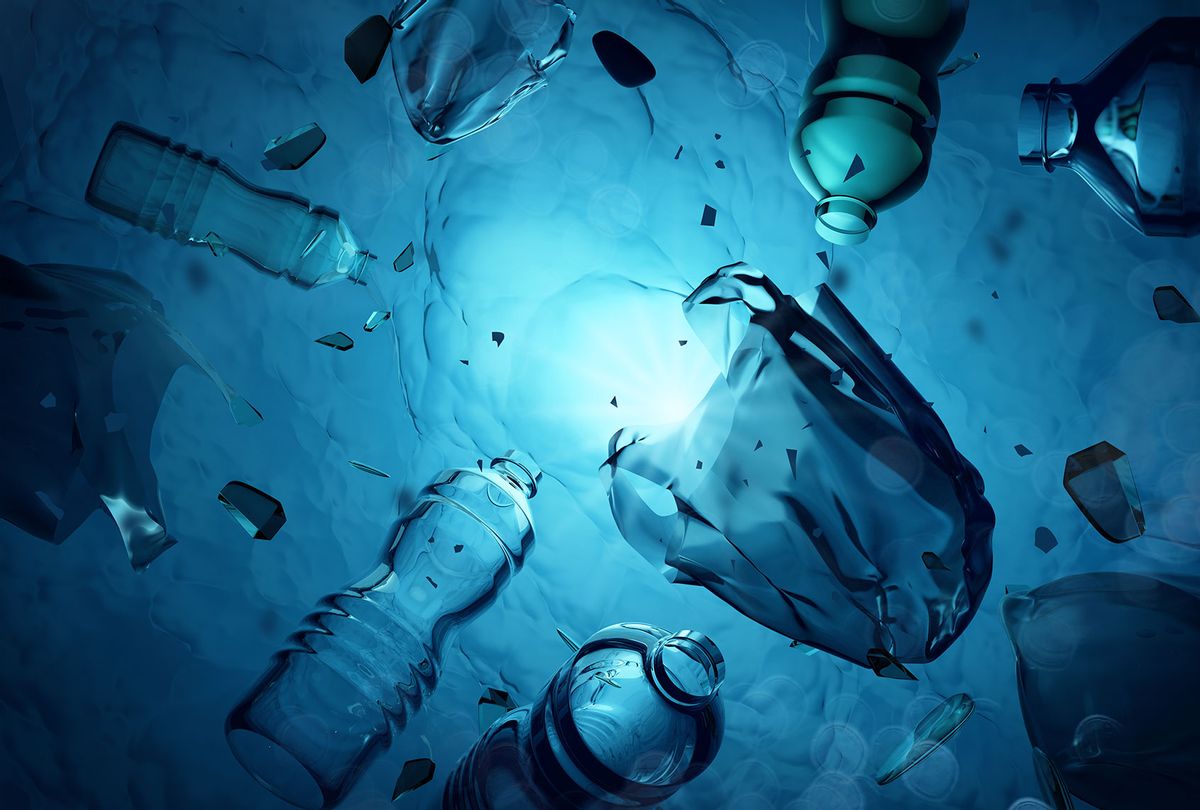 One of the most memorable quotes from the classic 1967 film "The Graduate" turned out to be prophetic, too.

McGuire, a would-be mentor advising a young man about his future, was correct about the growth of the plastics industry, although perhaps not in the way he intended. Indeed, we have overproduced plastic on Earth, to the extent that it is clogging our oceans and waterways, squirreling itself into our food and fisheries, and poisoning our bodies. Climate change is often billed as the greatest existential threat to humanity — yet plastic pollution is equally horrific in its capacity to disrupt civilization.

Plastics are a relatively recent invention. When we think of "plastics," what we're really think of are synthetic polymers. Polymers are substances made from long chains of molecules — they can be found in nature, such as the cellulose in plants — and synthetic polymers are generally designed to be durable and flexible; hence why they are known as "plastic."

Plastics are often made of carbon provided by fossil fuels like petroleum, although that was not always the case. The first synthetic polymer, created in 1869 by American inventor John Wesley Hyatt, combined cellulose from cotton with a waxy substance known as camphor that usually comes from trees. This became known as celluloid, but it was only a partially synthetic plastic. The first plastic to contain no molecules found in nature was invented nearly four decades later, in 1907, by a Belgian chemist Leo Baekeland who was trying to find a way to mass produce electrical insulators. Business leaders quickly realized that his creation, known as Bakelite, could be used to make a wide range of products. By the time America needed to ramp up industry to fight in World War II, the plastics revolution had taken off.

The explosion of plastic products, we are now learning, has not been an entirely good thing for civilization. Indeed, it has been very harmful for both human health and the planet.

"The plastic commonly used in packaging contains thousands of chemicals that are known carcinogens [a term for cancer-causing agents] and endocrine disruptors," John Hocevar, Oceans Campaign Director for Greenpeace USA, told Salon. "Chemicals from packaging can leach out of packaging into our food, particularly when the plastic is heated. Once we're done with the plastic packaging, it goes into a landfill or an incinerator, or often straight into the environment. Very little of it is recycled."

Hocevar added, "If it's incinerated, there are extremely dangerous chemicals called dioxins that can be produced which cause cancer and other health impacts. If it's landfilled, the chemicals can still leach out into water and soil or be blown into the air. At this point, we've put so much plastic into our environment that we're eating it, breathing it and drinking it every day." Indeed, plastics can be broken up into tiny particles known as microplastics that wind up entering food we assume is safe.

"There are studies that show plants are now uptaking microplastics through their roots," Hocevar explained. "And so things that we think of as the epitome of healthy food — an apple or a carrot — may actually have microplastics in every bite."

Erin Simon, head of plastic waste and business at the World Wildlife Fund (WWF), noted that there can also be economic ramifications for marginalized communities.

"We also know that we have these areas, where a lot of this plastic waste is persisting and collecting, in coastal communities, right at the ends of waterways entering our oceans, and those are areas where you have a lot of communities that depend highly on fishing for their livelihoods and food," Simon told Salon. "And because of the increase of plastic rates, they're having to travel further off shore. It costs them more in fuel and it means they may make less money. They may not be able to provide that for their family."

This plastic waste wreaks all kinds of havoc once it enters the human body. Indeed, largely because of hormone-altering chemicals present in plastics, human sperm counts in Western countries have dropped from 99 million per milliliter to 47 million per milliliter since the 1970s. (Below 15 million sperm per milliliter is considered a low sperm count.) This means that, if the current rate of decline is global and continues unabated, human beings could face a mass infertility crisis within the next few decades.

Dr. Shanna Swan, a professor of environmental medicine and public health at Mount Sinai School of Medicine in New York City, says that there are chemicals in plastics that serve as endocrine disruptors — meaning, chemicals that "impact the body's endogenous natural hormone function."

"And by impact, it could [mean] increases, slows, or interferes with in various ways," Swan explained.

There is also the problem of how plastic is impacting the non-human world. Plastic is being dumped into our oceans at unprecedented rates (a study released last month revealed that the pandemic has only made this worse), with Simon breaking down exactly how this happens. The majority of it, she explained, comes from land — basically our trash not being properly managed. There is also a large chunk that comes from "ghost gear," or fishing gear that for one reason or another winds up being abandoned or left derelict in marine environments.

"The reasons for its abandonment are many, so we won't make draw assumptions to the 'why' there, but we do know that when it is left, it continues to fish, and it continues to fish for everything and not just the things it was meant for," Simon told Salon.

Hocevar provided Salon with specific examples of animals that have been hurt by plastic pollution.

"We've seen pictures of whales washed up on beaches with their stomachs full of plastic bags or sea turtles with straws up their noses or albatrosses dead with stomachs full of bottle caps and lighters and other bits of plastic," Hocevar explained. "Sharks and turtles will take a bite out of a plastic bottle at sea or sea turtles often might be entangled in plastic bags or choke on them because plastic bags can resemble a jellyfish, a major source of food." As plastics gradually break down into microplastics, they have an increasingly drastic impact on the food chain.

"Necropsies of dead baby sea turtles nearly always show large numbers of plastic in their bodies," Hocevar told Salon. "It's sometimes difficult to say for sure that plastic was the cause of death, but it's such a huge problem. It's so widespread that it's very clear that it's affecting their chance of survival."

Unlike climate change, which requires massive shifts in the organization of the global economy in order to be addressed, plastic pollution seems comparably easier to solve: just stop making plastics, or at least mandate that plastic production needs to change how it works. Modern society would not be that different without plastics; indeed, early industrial capitalist societies used tin cans and glass mason jars for food storage, instead of plastic bottles and packaging. Likewise, many industrial products that are made of plastic today, like cars and appliances, were made of metal back then. Modern, industrial-era humans lived without plastics before, and it seems that we could do it again.

Some American politicians in the Democratic Party are actually working on the problem.

"When the average American is ingesting the equivalent of a credit card in plastic every week, we're facing a crisis," Sen. Jeff Merkley of Oregon, who chairs the Environment and Public Works subcommittee that oversees environmental justice, waste management and chemical safety, told Salon by email. Merkley worked with another Democrat, Rep. Alan Lowenthal of California, to introduce the Break Free From Plastic Pollution Act. The bill would force companies that produce plastic pollution to clean up their mess, which the authors hope will provide them with a financial motive to stop burning and dumping plastic. It would also close loopholes in how companies can eliminate waste export, beef up environmental justice protections and nationalize laws on addressing plastic pollution that have been found to work on the state and local level.

"Only a fraction of the tens of thousands of tons of plastic waste that end up in blue bins across the country actually get recycled, while the majority of it is buried, burned, or borne out to sea," Merkley explained. "If we keep proceeding with business as usual, the air we breathe, the soil we use to grow our food, and the waters that countless communities rely on will only become more and more polluted —putting Americans' health, particularly in communities of color and low-income communities, at serious risk."

While some of the burden rests on governments, Simon emphasizes that consumers can help reduce plastic pollution too.

"We know we can't just solve it by asking companies to use less material, use more recycled content and make everything recyclable, because that's what we've been asking of them for decades," Simon told Salon. "We know that this is going to require everybody to play a part, from how we're getting the material from the planet in the first place to how we use it to what we do when we're done with it — so that instead of it going to waste, all of that plastic become plastic that we use again."