The Muon g-2 experiment could upend the Standard Model of physics — but some think it may be a fluke. Here's why 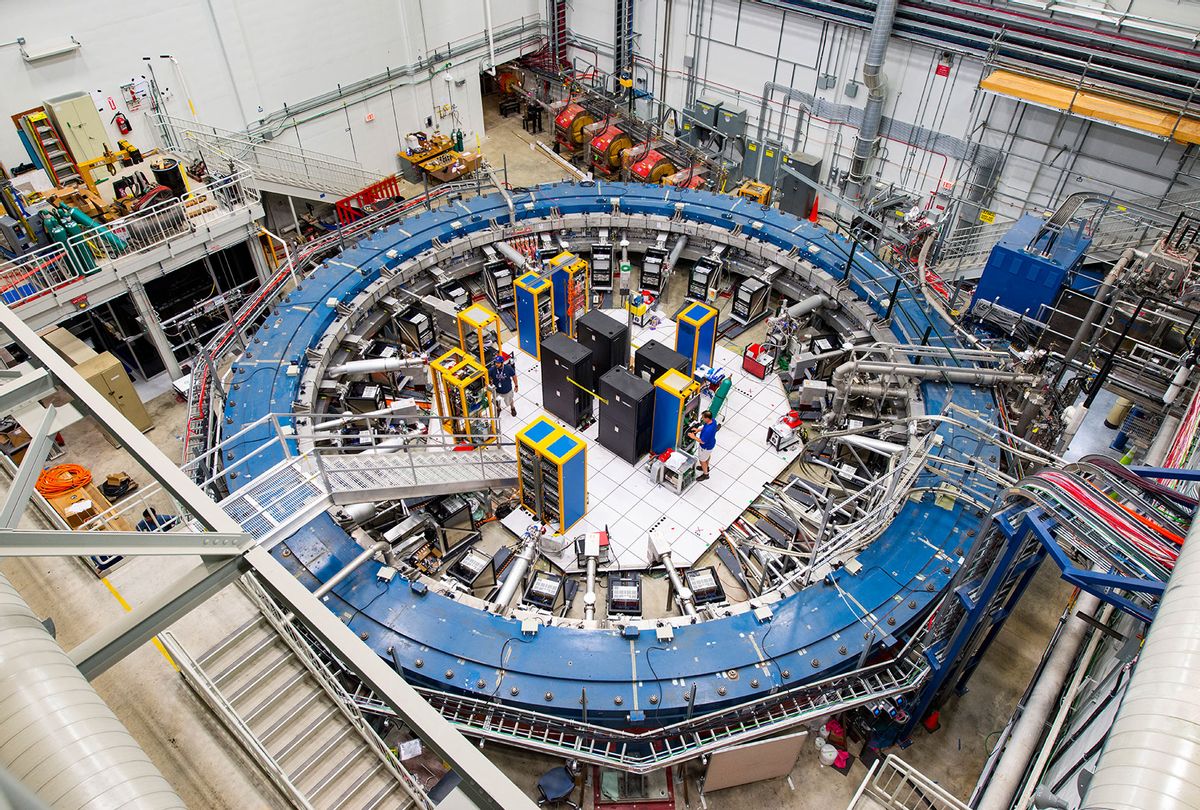 he Muon g-2 ring sits in its detector hall amidst electronics racks, the muon beamline, and other equipment. This impressive experiment operates at negative 450 degrees Fahrenheit and studies the precession (or wobble) of muons as they travel through the magnetic field. (Reidar Hahn/Fermilab)
--

One of the smallest things in the universe could have just changed everything we know about it.

On Wednesday, the U.S. Department of Energy's Fermi National Accelerator Laboratory (Fermilab) in Illinois revealed much-anticipated results from a storied particle physics experiment known as Muon g-2. The bizarre results, which showed something quite different than what standard theories projected, shocked physicists around the world — and, if confirmed, suggest that fundamental physics theories may be wrong.

"This is our Mars rover landing moment," Fermilab physicist Chris Polly told the New York Times of the findings.

"This is strong evidence that the muon is sensitive to something that is not in our best theory," Renee Fatemi, a physicist at the University of Kentucky and the simulation manager for the Muon g-2 experiment, said in a press statement.

The aforementioned particles, known as muons, acted peculiarly when exposed to a strong magnetic field at Fermilab. That odd result could be the result of a new, as-yet-undiscovered fundamental particle — which could potentially throw a wrench in everything humans know about physics.

But not all physicists buy the results. The reason has to do, in part, with a number called sigma.

In physics, as in most sciences that involve experiments, one's experimental results are characterized by a number, sigma — a measurement of standard deviation, which relays how likely it is that said result is random chance.

Say that you penned a theory that said that coins would always come up heads, and then performed an experiment in which you flipped a coin 10 times and saw that your coin came up heads every time. It is actually possible that this could happen — in fact, about one in a thousand times, it will — but your results, though initially shocking, would not cause a rethinking of the theory of coin flipping. That's because 10 flips is not enough trials to warrant a sigma number that would signify "true without a shred of doubt" status.  That would require a so-called 5 sigma result, which corresponds to a probability of one in 30 million that your experiment was a fluke.

The Fermilab experiment with muons was a follow-up to an experiment at Brookhaven National Laboratory in 2001, which had a significance of about 3.7 sigma. Combined with the Fermilab's results, the standard deviation or sigma value has increased to a 4.2; 5 is the golden standard for scientists to claim a new discovery.

In other words, the Muon g-2 experiment did not reach that golden standard five-sigma bar.

Once in a blue muon

Despite being one of twelve fundamental particles in the universe, muons are rarely seen; they have properties similar to everyday electrons, in that they hold a charge, yet their mass is far greater than their electron cousins. Muons are also extremely shortly-lived: after they are created in high-energy collisions, such as when cosmic rays strike Earth's atmosphere, they decay in an average of 1.56 microseconds later. It is one of physics' great mysteries that some of the universe's fundamental particles would be so ill-equipped to survive in this universe.

Similar to its cousin the electron, muons have an internal magnetism; like any magnet, they can be manipulated and redirected in the presence of magnetic fields. Particle accelerators at Fermilab can produce muons in large quantities, which is what researchers at Fermilab did for the Muon g-2 experiment — tracked how muons interact in a particle accelerator in the presence of a strong magnetic field.

In such a magnetic field, the muon wobbles in a manner determined by an intrinsic number known as the g-factor. This number changes depending on the muon's environment and interactions with other particles. Muon g-2 is designed to measure the muon's g-factor to a very high precision.

That might seem small. But for a theory that has accurately predicted the properties of particles to more digits than that, this discrepancy is huge.

"This quantity we measure reflects the interactions of the muon with everything else in the universe," Fatemi said. "But when the theorists calculate the same quantity, using all of the known forces and particles in the Standard Model, we don't get the same answer."

A cloud of muons, a grain of salt

Yet despite the excitement of the Fermilab team, some physicists are cautious about the findings.

Avi Loeb, former chair of the astronomy department at Harvard University, was more optimistic about the findings — but, as he noted, cautiously so.

"The measurement is intriguing, but its statistical significance of 4.2 standard deviations has not reached the gold standard in particle physics data of 5," Loeb told Salon via email. "Also, it is unclear whether the deviation represents new physics or a theoretical miscalculation; about half a dozen groups of theorists are calculating the expected value and theoretical uncertainties cloud the significance of the discrepancy."

Loeb added: "Over the years, many anomalies have cropped up only to disappear, leaving the Standard Model of particle physics unchanged."

That is indeed true, and speaks to the efficacy of the Standard Model. One previous anomaly emerged in 2018, an experiment that involved binding muons to protons and then measuring the proton's radius turned up a peculiar result about the proton. The observed width of the proton, when it was bound with a muon, appeared to be about 4 percent shorter than was expected.  Some physicists speculated that the result could be explained by "new physics" — non-spatial dimensions, new fundamental particles, or something akin. Future studies found closer-to-expected values for the proton's width; yet those did not have the sigma values to be definitive. As of 2020, the jury is still out, but new physics seems less likely.

With regards to the Muon g-2 results, Schumm said physicists do know is that there appears to be a "new effect" with the muons at the moment. But that doesn't mean that new particles have been discovered — yet.

"If there is a new effect then all we know is there's probably a new particle out there to be discovered, associated with that effect," Schumm said.

Could it still be possible that the Standard Model is wrong?

"That's definitely an over-dramatization to say that the standard model is being threatened," Schumm said. "The Standard Model has always, since the day it was invented, has been known to be what's called an 'effective theory.' Schumm likened the Standard Model to the "tip of an iceberg," in which the tip is observed and well-understood even if we do not know entirely what lies beneath the water. "I would bet any amount of money [the Standard Model] will never be toppled, as a representation of that tip of the iceberg," he said.

Schumm likened this scenario to the relationship between Newton's Laws and Einstein's theory of relativity — noting that Albert Einstein did not throw away Newton's laws, but built on them. In other words, if there is a new particle, it is unlikely that the Standard Model will be tossed to the side, but rather built upon.

Caution aside, if the discrepancy is confirmed by future experiments, it could not only change physics but it could further our understanding of the universe — and perhaps even explain inexplicable phenomena like dark matter, which may be related to undiscovered particles.

"If the discrepancy is demonstrated by future improvements in experimental data and theoretical calculations, then the new particles that are implied may be related to the dark matter in the universe," Loeb said. "At this time we do not know the nature of most of the matter in the universe. Knowing it would help us understand how galaxies like the Milky Way were assembled over cosmic history."