The one good thing Trump ever did

Biden builds on the one good thing Trump ever did 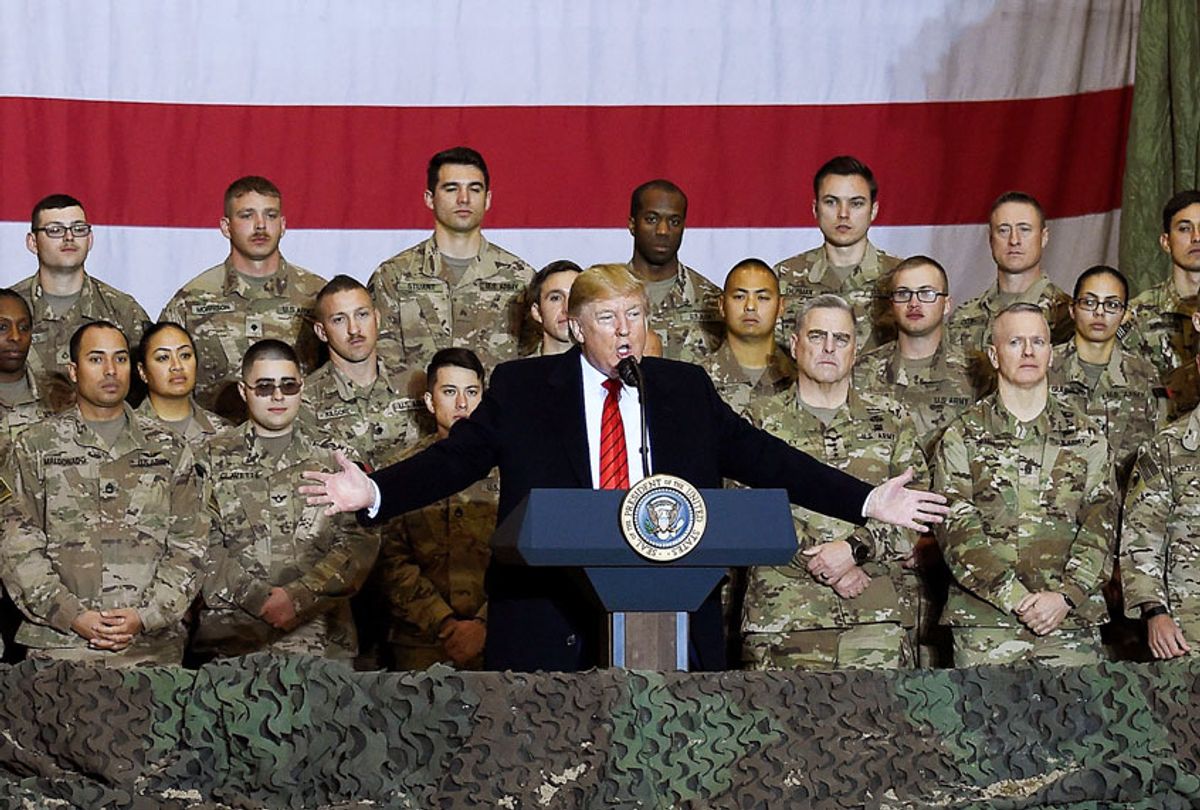 November 28, 2019, US President Donald Trump speaks to the troops during a surprise Thanksgiving day visit at Bagram Air Field in Afghanistan. (Getty Images)
--

There were many bizarre moments during the Trump administration but one of the oddest has to be that time he spontaneously invited the Taliban to Camp David on the anniversary of 9/11 in 2019. The story went that the peace talks preceding withdrawal were on the verge of bearing fruit and President Trump wanted to have a big ceremony like Jimmy Carter did with the Camp David Accords — only much bigger and better. The New York Times reported that during a meeting with various advisers the idea was floated to invite the Taliban to the U.S. and Trump, of course, was thrilled. He could smell that Nobel Peace Prize finally coming home to papa.

There were quite a few people who were just a tad appalled by this idea, needless to say. There may be no choice but to leave Afghanistan in the hands of the Taliban but considering the history of the past 20 years, the idea of inviting them to the U.S. for a big party wasn't a welcome one. Doing it on the anniversary of the attacks on the World Trade Center and the Pentagon, attacks which were enabled in part by these same people, sent shudders through those who knew how that would be received by the 9/11 families and the military. And while a majority of Americans are in favor of a U.S. withdrawal from Afghanistan, rewarding the repressive, violent, fundamentalist authoritarian Taliban, who the U.S. government officially designates a terrorist organization, with a dazzling ceremony a la Kim Jong Un is not something anyone wants to see. The plan fell apart when the Taliban insisted that the deal be announced before they came to the U.S. while Trump insisted that it be announced after so that he could take the credit for negotiating the deal personally at Camp David. And that was that.

Nobody would have even known the plan existed except that Trump inexplicably decided to tweet about it on a Saturday night and let the cat out of the bag. He soon lost interest in Afghanistan when it became clear that he wouldn't have his big celebration, but withdrawal negotiations continued with a final agreement to an American withdrawal in May 2021. Trump sporadically made promises on the issue that he didn't keep, the last one being an announcement that all troops would be home by last Christmas. Needless to say, that didn't happen and there's no way of knowing if he would ever have followed through.

Perhaps the only thing Trump has in common with the current president is that Biden's also been an Afghanistan skeptic for years and was known as a voice pushing for ending American involvement within the Obama administration. He said very clearly that he intended to end that war if he won the election. Upon taking office the administration set up a policy review on the subject and for good reason. Who knows what kind of diplomatic landmines the Trump administration had left lying all over the place? That review is still ongoing but on Tuesday, the Washington Post reported that Biden had made a decision to extend the May 1st deadline to leave until September 11th, but leave he will do regardless of whether the Taliban and the Afghan government come to an agreement.

He is scheduled to make the announcement today. According to Spencer Ackerman at the Daily Beast, the Biden administration hopes that a hastily drawn-up summit in Istanbul can bring the two parties together to agree on a power sharing deal before the May 1st deadline and help soothe any ruffled feathers from the Taliban over the short delay. (The Taliban leaders said late Tuesday that they would boycott any such summit until the U.S. completely withdraws, so it remains to be seen whether this will mark a collapse in the ongoing talks or not.)

The New York Times' David Sanger reported that Biden and his staff had to work hard to get the Pentagon on board with this plan but that he was unwilling to bend in his desire to make a date certain announcement despite their insistence that it should be conditional. It's not hard to see why. American withdrawal has been contingent on various conditions being met for nearly two decades and somehow it just never seems to happen. The US must make the decision and follow through unless it intends to be a permanent occupying force, something for which the American people have no appetite.

Trump's desire to withdraw from Afghanistan was always one of his few positive foreign policy objectives although I don't think anyone expected that he would succeed. He had no understanding of the complexities and only saw it as a way to burnish his reputation as a "winner" and a "deal maker." But in a way, his ignorance helped drive the decision beyond the typical hawkish national security dogma to put in place a serious negotiation to finally end America's presence there. He got Fox News people to start talking about the need to end the "forever wars" and soured most of the GOP base on the relics of the post-9/11 War on Terror.

And his vendettas against his enemies have led to a fracturing of the Republican foreign policy establishment. Trump's enemy number one, super-hawk Liz Cheney is predictably leading the charge to oppose Biden's decision to withdraw at all, while Trump acolytes are struck unable to do the same since Trump's only criticism of the deal must be that it's delayed. The usual screeching about "cutting and running" is muted, giving Biden much more room to make this move than any Democrat normally would have. It may be the one good thing Trump ever did.

As Sanger put it in the Times:

Mr. Biden is declaring that war is over — no matter what, and even though the United States is leaving with most of its goals unmet, and Afghanistan's stability deeply in jeopardy. If there is no terrorist attack launched from Afghan territory again, no echo of Sep. 11, 2001, Mr. Biden may well have been judged to have made the right bet.

Let's hope so. But it's a risk that he must take if we want to turn the page and face the challenges of the future. The War on Terror was a mistake from the beginning. It's long past time to admit that and move on.