Defund the media! (Sort of.) Political reporters are hurting America — let's get rid of them 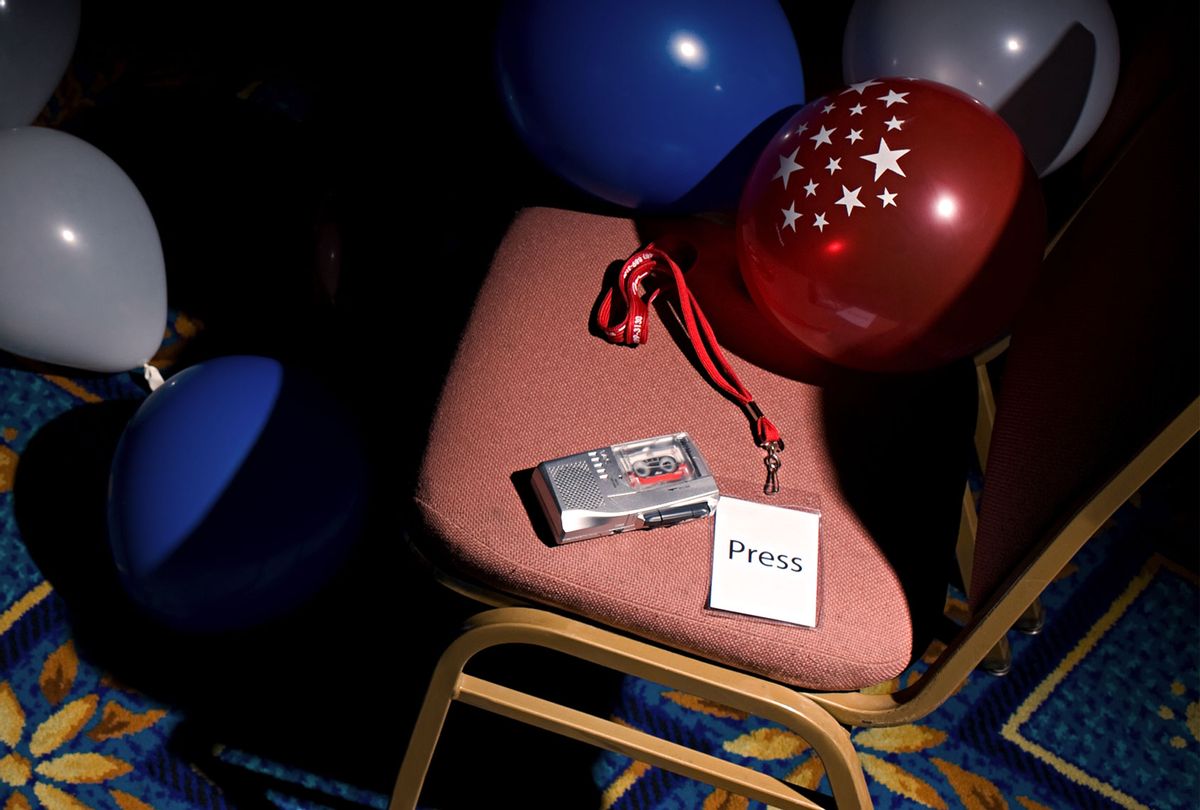 A press pass and tape recorder on a chair (Getty Images)
--

When I founded my Press Watch website a year and a half ago, my goal was to improve political journalism. Since then, I've railed against lazy, both-sides, optics-obsessed, horse-race coverage. I've preached about the desperate need to replace amnesiac stenography with context, accountability and passionate advocacy for the truth.

But a few days ago, along came NYU journalism professor Jay Rosen (probably the person I quote the most hereabouts) with a thought: What if you should just give up?

OK, that's not how he phrased it.

"The politics beat breeds analysts of the game. It's unavoidable," he wrote.

So instead of trying to change them, he suggested, let's make the case for there to be fewer of them.

Leave "a skeleton crew to handle the game, and the both-sides sensibility that is native to it," he explained. They would track the spin, handicap the campaigns, offer review of the day's optics and obsess over who's up and who's down.

And then major news organizations could "redistribute resources to subject-matter reporting, where the focus is on how to solve problems."

As Jay explained: "Politics isn't really a subject. It's a phase or dimension of other things. There's a politics to improving infrastructure in the U.S., but that's just one part of the problem. When the beat is politics itself there's a 'missing' subject. That vacuum is filled by the game."

I think that's exactly right. What I see happening these days, in Washington newsrooms filled with a surplus of political reporters and a relative dearth of subject-matter experts, is that stories that are actually about health or science or governance or race or demographics or democracy all end up becoming "political" stories.

For a political story, what matters is the fight and the moves, which party comes out ahead or which politician — or whether someone said something stupid. The working assumption is that there are two sides, and that they are presumptively equally valid. The time frame is generally 24 hours or less. The favored device is the pithy quote. The goal is to find the drama and review it from a remove.

Whether what's being discussed potentially reflects an effective solution to a real problem experienced by actual human beings is not what matters.

Jay was responding to my many imprecations over time for editors to let subject-specialist beat reporters, rather than political reporters, take the lead on the most important stories of the day — and to send them, instead of White House reporters, to demand answers from White House officials.

"Get political reporters off the coronavirus story because they don't distinguish between right and wrong," I wrote last March. "Hey political reporters — get lost!" I wrote days after the election, because instead of focusing on the policy challenges, they were already setting the narrative that if Joe Biden didn't unify the nation he would be a failure. And in January, I proposed a rebranding of political reporters as "government reporters" to free them to cover what's happening in Washington in the context of whether it is serving the people well, rather than which party is winning. My tweets on the subject are legion.

But to Jay's point, that is all so damn naïve! There's a big market for the horse-race, "who's up and who's down" stories, which means political reporters (and their editors) aren't going to change. The reporters are happy. The editors are happy. Bitching and whining from people like me doesn't shame them, it amuses them, because I obviously don't get it.

And political reporting does meet a certain set of needs. The people who run news organizations these days are particularly afraid of being boring. Political stories are rarely boring. Political reporters have figured out that when you write about optics and who's up and down, it's always changing! So you can make it seem very dramatic! In fact, even when it's not dramatic, that lack of drama is dramatic!

When you put a political reporter on a story, they never start by writing "of course this happened, because this is how things work." Because political reporters tend to think very short-term, they can be easily surprised. They can find a "wow, look what just happened!" story where a subject-matter expert would write "this is a big distraction from the real issue" or "this really doesn't address the problem."

They treat the right-wing media ecosystem as if it were their assignment editor, because it tends to produce exciting stories. They obsess over the president's every move and utterance — which made a certain amount of sense when the president was Donald Trump, but there is now an actual policy-making process that requires attention. (The questions they ask show how profoundly out of touch they are with the concerns of normal people.)

They can also turn a workaday story into a substance-free scandal! For instance, when President Biden was asked recently if he supported moving the All-Star game out of Atlanta — he said he did — Washington Post White House bureau chief Ashley Parker cried foul. Not because of the answer, but because he answered at all! "The question should have been a simple one," Parker and her coauthors wrote, the obvious implication being that he should have ducked it. Instead of ducking it, he took a principled position — one with which some people disagree.

You might think that any reporter would be happy when a government official answers a question, rather than ducks it. But political reporters operate in a different world, ruled by optics. Indeed, political reporters do a lot of ducking themselves — no more so, recently, than when covering the issue of voter suppression, which they obfuscate to avoid the appearance of "taking sides."

Political reporters don't even cover politics unless it involves elected officials. The country is being swept by mass movements that have engaged an unprecedentedly large number of regular Americans, but those are only stories when people connected to those movements set things on fire or get shot.

Did I mention how often political reporters are surprised? They are constantly surprised! For instance, they repeatedly discover, to their amazement, that the modern Republican Party, as NBC political reporter Mark Murray recently tweeted (to many people's amusement), "is no longer your father's Republican Party." They are utterly gobsmacked when they realize — over and over again — that racism, not economic anxiety, was a major driver of radical Trumpism.

Subject-matter beat reporters, in stark contrast to political reporters, develop deep expertise about issues of substance. They have the confidence to state truths without having to attribute them to "critics." Rather than emptying their minds of any preconceived notions, they use their accumulated knowledge to put what they write in context.

They identify problems on their beats, then evaluate proposed solutions to determine how effective they would be, rather than how cleverly worded they are. They focus most intently on what's important in the areas they cover, not exclusively on what just happened.

At least they do in theory.

Because — and this is where I'm finally getting back to Jay's argument — unfortunately, in too many of the top Washington newsrooms, even the subject-matter experts are under incredible internal and external pressure to behave more like political reporters.

The coin of the realm in our elite newsrooms is the political angle, even for those who might know better. Subject specialists get assigned stories by editors who love political stories, and who think stories with context are depressing, which they often are, and boring, which they can certainly be — if you have the attention span of a gnat.

You will still find beautiful, humane, long-form reporting here and there — though it's more likely to be in the print magazine sections than the print front pages. (See for instance, New York Times Magazine staff writer Marcela Valdes' important and evocative piece on immigrants suspended in Temporary Protected Status.)

Who looks at a rise in COVID infections and thinks: "This could be really bad for Biden"? Not normal people. Not, I would have thought, health reporters.

The story looked at how Biden's infection numbers were good at first, but are now climbing again — as if this refuted Biden's "railing" about Trump's negligence and belied his vow to adopt "a more muscular strategy." Only in an article this insane would reporters feel obliged to essentially refute their own argument by dutifully pointing out, for the record, that "Biden … has no more sway than Trump over a mutating virus that scientists have only begun to understand." You don't say.

What exactly should Biden do differently? The one named critic of his virus policy in this article is Doug Burgum, the Republican governor of North Dakota who lifted his state's mask mandate in January. Burgum, the Post reporters wrote, "suggested that Biden might also accomplish more if top administration officials, including the president and vice president, joined weekly calls with governors. He noted that Vice President Mike Pence and Trump Cabinet officials were on such calls last year, which Burgum said were a platform for candid discussion."

In reality, as the Post reporters themselves acknowledged, Trump's approach was to feud with governors and let "internal turf wars … rage for days." By contrast, at the Biden White House, "six officials described a non-blaming culture that is unruffled by the uptick in cases."

Who thought this could be a front-page story if it was about political optics, rather than being about the alarming increase in cases? I'll hazard it wasn't the health reporters. I'd bet it was some senior editor in the Washington bureau.

So my point here is that neither what I've been suggesting (reform political reporting)  nor what Jay is suggesting (cut back on political reporters) will happen, or will do any good, until we get rid of the senior editors who currently rule those newsrooms.

I look forward to the day they are replaced with a younger, more diverse group of journalists who unabashedly cleave to core journalistic goals like creating an informed electorate, standing up for the common person, encouraging pluralism and, most of all, speaking truth to power. I'm hopeful, in the long run. In the meantime, I'll keep on bitching and moaning.