Republicans have renewed their push to crackdown on protesters 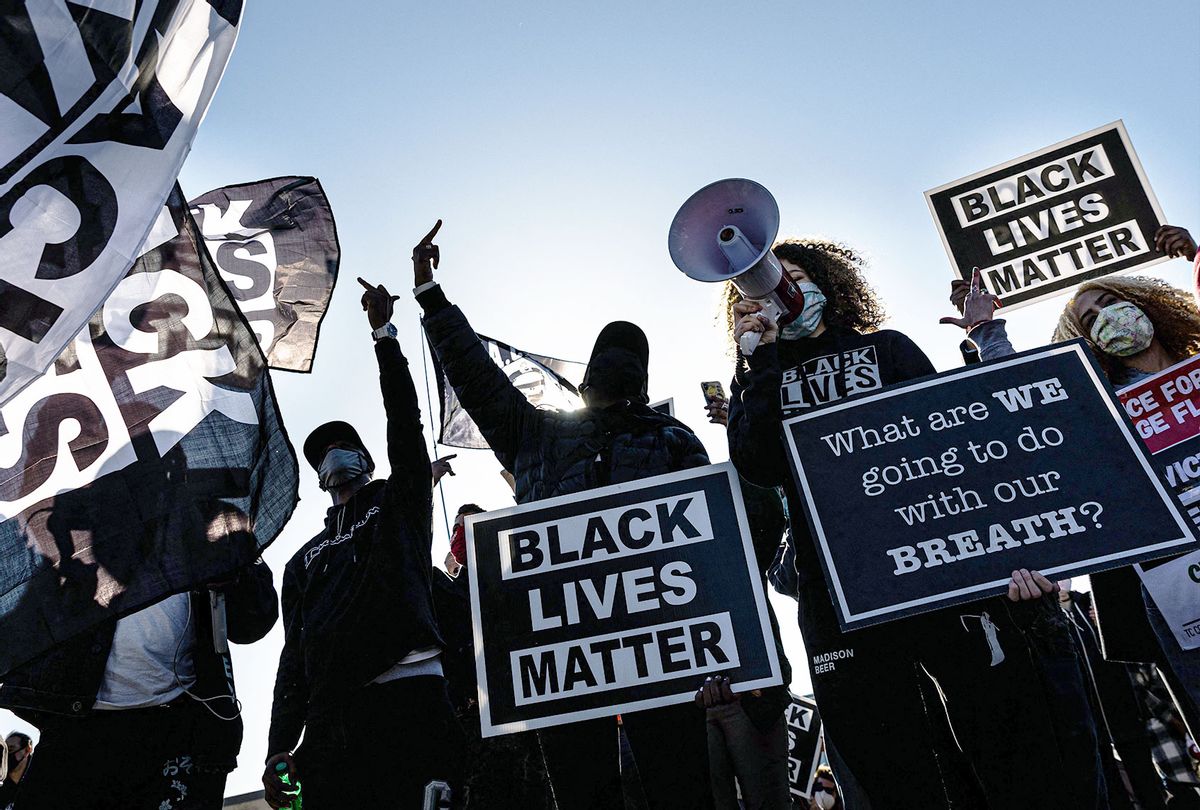 Demonstrators hold "Black Lives Matter" signs as they participate in the "Justice for George Floyd" march outside the Minnesota State Capitol on March 19, 2021 in Saint Paul, Minnesota. (KEREM YUCEL/AFP via Getty Images)
--

Amid the Republican-led push to crack down on protesters in the wake of the Georgia Floyd protests, state lawmakers throughout the country are now attempting to lessen penalties for drivers who unintentionally kill protestors blocking roadways.

In Oklahoma, Republican lawmakers approved a bill that grants civil and criminal immunity to motorists who kill or injure protesters "fleeing from a riot." The bill, HB 1674, now headed to the Republican governor's desk, states the following:

The bill, just the state's latest in a series of GOP-backed bills taking aim at protesters, according to The Oklahoman.

"Maybe the way to prevent something like this from ever happening again is to make reforms on the broader systemic issue," Oklahoma Rep. Monroe Nichols said in a sharp rebuke of the bill in a floor debate, pointing to the undergirding biases within the criminal justice system. He added that he did not look forward to having to tell his son that Oklahoma "made it so that folks who may advocate for people who look like [his son] can be run over with immunity."

State Republicans have countered that the bill merely attempts to protect drivers in harm's way, as Rep. Kevin McDugle, the Republican who introduced the bill to the Oklahoma House, argued. "This bill simply says, 'please stay to the peaceful protests. Don't block roads. Don't impede on the freedoms of others."

A similar legislative effort is being mounted in Tennessee, where last month state legislatures proposed a bill that would grant immunity to drivers who hit protesters and allow the state to charge protesters who block roadways with a felony.

The bill, HB 0513, "provides that a person operating a motor vehicle who is exercising due care and unintentionally causes injury or death to another person [...] will be immune from prosecution for the injury or death." Tennessee tried to enact a similar bill in 2017, but the bill died in the Senate Judiciary Committee, according to CNN.

"This legislation would suppress protest by turning obstruction of traffic into a felony offense, robbing individuals of their right to vote if they are convicted of these new felony charges," he told CNN. "It also offers immunity to drivers who run over protesters in the road and criminalizes speech that causes 'emotional distress' to or 'frightens' another person. This vague and troubling suppression of free speech can easily be abused, leading to the criminalization of protesters' words and beliefs."

"It's the Republican response to the social justice protests a year ago, but nothing to the insurrection we saw in Washington D.C.," NAACP Tennessee legal redress Van Turner echoed. "I shouldn't lose my right to vote because I'm exercising my first amendment right to peacefully assemble in a protest," he added, drawing on the fact that felons are stripped of their right to vote.

Controversial as they might be, anti-protest bills of this nature are nothing new. Although Republican state lawmakers have been emboldened by Democratic President Joe Biden's election to pick fights at the state level, they were similarly activated by Trump's election back in 2016.

As Salon's Sophia Tesfaye noted, "In the week following Donald Trump's stunning presidential victory, Republicans elected to lower-level offices across the nation have pushed forward some radically right-wing legislation, including a total ban on abortions and the sanctioning of protest as 'economic terrorism.'" Washington state Republican Senator Doug Ericksen introduced a bill that would allow state authorities to charge protesters with "economic terrorism" if they participated in illegal demonstrations or coerced private citizens into doing so.

Back in 2017, states like North Dakota and Utah saw similar bills seeking to protect drivers against penalties for hitting protesters. Similarly, the Kentucky state Senate passed a bill just this year criminalizing the act of insulting a police officer. This week, a spate of four anti-protest bills were also introduced to the Ohio state legislature, all designed to protect citizens from the "lawlessness" seen during the Georgia Floyd protests. And Florida is on the cusp of passing an anti-protest bill that would similarly criminalize protesters for blocking roadways.

According to the International Center for Not-For-Profit Law, which tracks anti-protest bills around the country, 27 bills have been enacted that restrict the right to peaceful assembly, with 71 bills still pending. Just about every U.S. state legislature has considered a bill of this nature.