Protesters hit the streets in Chicago, D.C., Portland and elsewhere, as Chauvin case likely heads to the jury 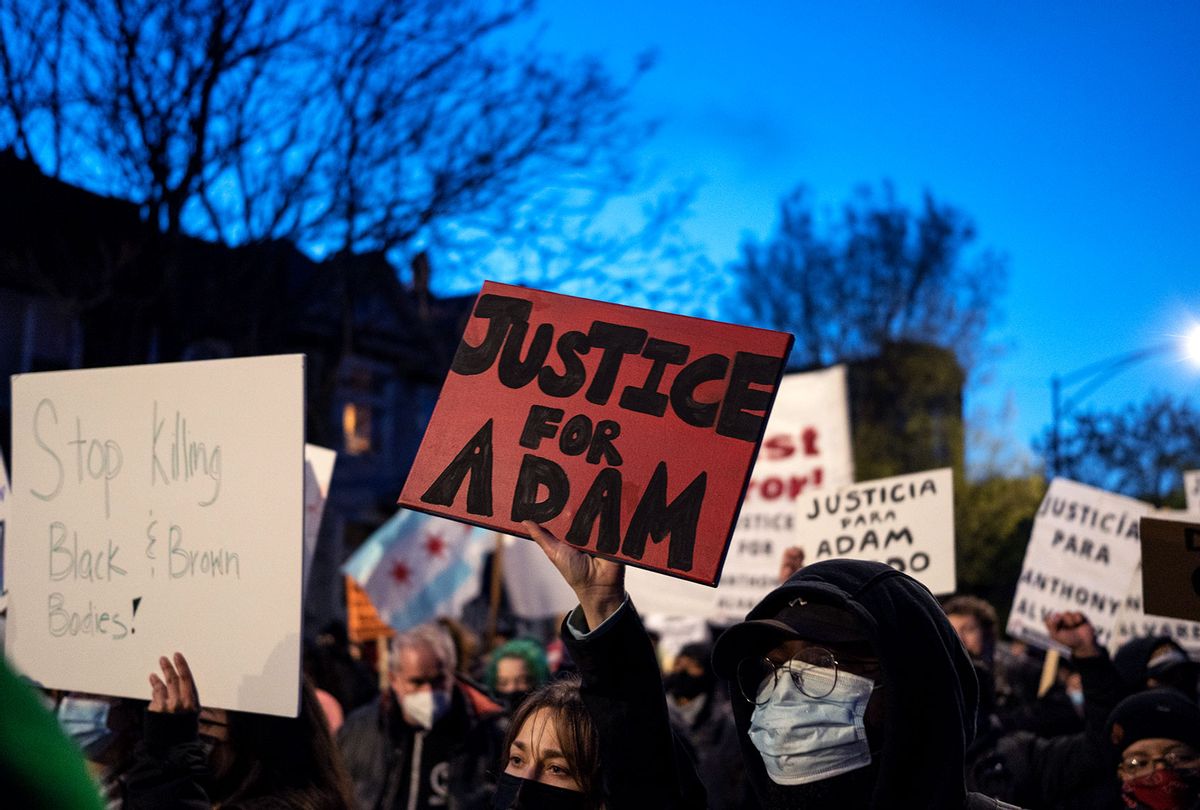 Protesters march through Logan Square neighborhood during a rally on April 16, 2021 in Chicago, Illinois. The rally was held to protest the killing of 13-year-old Adam Toledo by a Chicago Police officer on March 29th. (Max Herman/NurPhoto via Getty Images)
--

Racial justice advocates and critics of police violence took to the streets for protests in multiple U.S. cities Friday night and over the weekend as the trial of Derek Chauvin — the former officer accused of murdering George Floyd, an unarmed Black man, last year — neared its conclusion in Minnesota.

While jurors in the Chauvin trial have heard from seven witnesses for the defense and 38 for the prosecution, the ex-cop on Thursday invoked his Fifth Amendment right to not testify. Closing arguments are expected on Monday. The jury, which will be sequestered during deliberations, could deliver a verdict next week.

Chauvin has pleaded not guilty to second-degree unintentional murder, third-degree murder and second-degree manslaughter. If convicted, he could face up to 40, 25 and 10 years in prison for the charges, respectively. CNN noted that the defense has used a "three-prong strategy for clearing the officer of culpability: Floyd died from drug and health problems; Chauvin's use of force was ugly but appropriate; and a hostile crowd of bystanders distracted the former officer."

"Their goal was to throw a bunch of arguments out there and hope that something resonated with the jurors, but I just think it's too much to overcome with that video," said CNN legal analyst Jennifer Rodgers, referring to footage of Chauvin kneeling on Floyd's neck as he gasped that he couldn't breathe. The video circulated on social media, sparking national protests and demands for not only justice but also reforms.

In the wake of recent police shootings, several cities have seen more demonstrations.

Thousands of people on Friday marched and rallied in Chicago, where police killed 13-year-old Adam Toledo in late March. Videos and other materials released Thursday revealed the boy had his empty hands raised when an officer fatally shot him. Further fueling outrage over Toledo's death, the president of the city's police union called the shooting "100% justified" and the officer's actions "heroic."

By Friday evening, "several hundred people had gathered in Logan Square Park with plans to march to Mayor Lori Lightfoot's house nearby, though police barricades kept them from getting too close," reported ABC 7 Chicago. As the crowd grew, "many in attendance said they were there to protest a system of policing that simply isn't working, and they wanted the mayor to hear that message."

Andrea Popoca, who joined the demonstration, carrying a sign with Toledo's name on it, told the Chicago Sun-Times that "this keeps happening and it simply needs to stop."

"We're here to show our support for the community in this unjustified murder," the 26-year-old said. "That video was sickening and we were mortified when we saw it."

In Washington, demonstrators gathered Friday night at Black Lives Matter Plaza then marched through the nation's capital, demanding an end to police brutality and calling out the names of people killed by police, including Toledo and 20-year-old Daunte Wright, who was fatally shot by an officer during a traffic stop in Minnesota last week, according to The Hill.

At least 100 people protesting Wright's killing were arrested outside police headquarters in Brooklyn Center, Minnesota, on Friday in the sixth straight night of demonstrations. Police declared the gathering — which grew to about 1,000 people, according to the Star Tribune — unlawful, and an 11 p.m. to 6 a.m. curfew was set.

As the Tribune reported:

Earlier in the evening, Tiffany Burns, the sister of Jamar Clark, who was killed by Minneapolis police in 2015, and Toshira Garraway, founder of Families Supporting Families Against Police Violence, were among the demonstrators present.

"We want a federal investigation into all these departments — the ones that have murdered our loved ones, to be prosecuted and charged, cases reopened," Garraway said when asked what justice means to her.

Kim Potter, the police officer who shot Wright, resigned from the force last Tuesday and was charged with second-degree manslaughter on Wednesday. If convicted, she could face up to 10 years in prison and a fine of up to $20,000.

U.S. District Judge Wilhelmina M. Wright on Friday evening granted the ACLU-MN's request for a temporary restraining order against the heads of the state Department of Public Safety, Minnesota State Patrol and their officers to stop law enforcement from arresting, threatening, seizing the equipment of or using chemical agents or physical force — including flash bangs, non-lethal projectiles and riot batons — against journalists covering the protests in Minnesota.

"The judge found evidence that state law enforcement is attacking and harassing journalists covering the Daunte Wright protests, and there's danger of this behavior continuing with the upcoming Derek Chauvin verdict," said ACLU-MN staff attorney Isabella Nascimento in a statement. "The troopers' behavior is clearly intended to discourage journalists from documenting protests that are of great public importance and holding police and our government institutions accountable."

Nascimento added that "although other law enforcement agencies aren't part of the order, the judge makes it clear that this unconstitutional conduct designed to suppress free speech will not be tolerated, and we hope these other agencies will now willingly choose to change their behavior to conform with the order."

CNN reported that "police in Portland, Oregon, said they used pepper spray and smoke canisters to break up a crowd that gathered on Friday as they investigated the fatal shooting of a suspect by police in Lents Park." By the afternoon, about 100 people had gathered at the park, according to KATU News.

The evening brought "a Black Lives Matter march and speech event along the downtown waterfront," after which a crowd marched and chanted, "stand up, fight back!" reported Oregon Public Broadcasting.

Later Friday, "activists seeking to abolish police caused damage to several buildings in downtown Portland," according to OPB. Police declared the incident a riot and made several arrests.