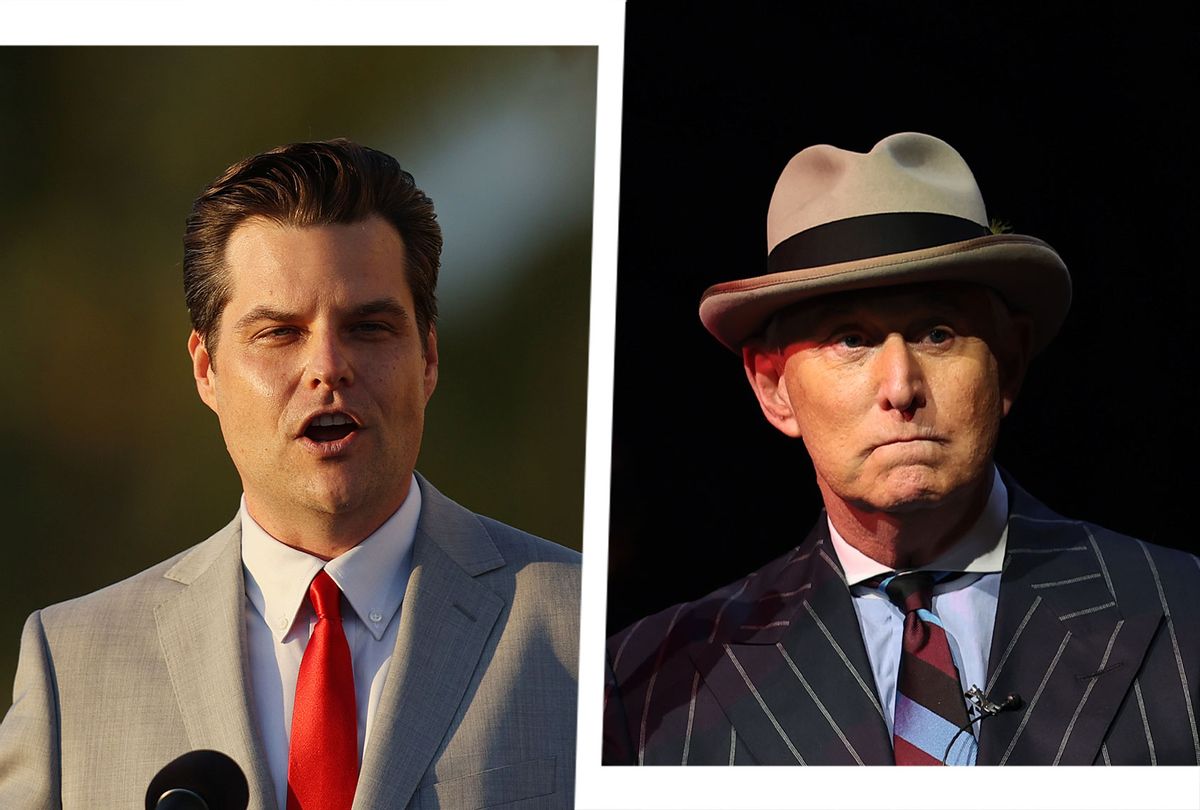 Matt Gaetz may not have many of his fellow Republicans in Congress rushing to his defense now that news of a Department of Justice investigation into his alleged sex trafficking of a minor has been made public, but it does appear that the Florida congressman has at least one friend left: Roger Stone.

The longtime GOP fixer and political operative appears in new campaign finance reports showing Gaetz paid Stone and his embattled firm, Drake Ventures, at least $5,000 in "strategic consulting" fees from January through March of this year. Gaetz had never paid Stone or Drake previously, according to an analysis of past filings by Roger Sollenberger of The Daily Beast. And Gaetz received no contributions from his colleagues in Congress, a common occurrence for Gaetz' past campaigns, during this same period.

The payment to Stone came on March 24, one week prior to the initial New York Times report on the investigation into Gaetz and just a few days before his father, a powerful Florida Republican himself, reportedly met with a former DOJ prosecutor about the case.

It's unclear what advisement, if any, the longtime Republican operative and close associate of former President Donald Trump gave to Gaetz regarding the allegations he faces, telling Salon, "I don't comment on the services I provide to my few clients."

Though a few weeks after being hired, Stone did offer Gaetz some advice during an appearance on conspiracy theorist Alex Jones' Infowars broadcast, saying the Florida congressman "should not go hide in a hole, he should be out there, like he was on Tucker [Carlson] last night."

Stone and Drake Ventures were also the subject of their own headlines last week after the Justice Department sued Stone and his wife, Nydia, in Florida over an unpaid tax bill of nearly $2 million. The lawsuit accused Nydia of using an "alter ego" to shield personal income from tax collectors and alleges the couple used Drake Ventures to "evade and frustrate" the IRS.

According to prosecutors, the company is "dominated and controlled" by Stone and his wife "to such an extent that it does not exist as an independent entity."

Stone denied the allegations in an email to Salon, saying there was "nothing 'shady'" about Drake Ventures or his taxes. "The revenues to the LLC cited in the DOJ complaint have been fully reported in our tax returns for over 20 years," he claimed, adding: "All appropriate taxes were paid."

The partnership between Gaetz and Stone emerges as the embattled Florida congressman appears to be losing his staunchest defenders online. In the days following news of Gaetz' sex trafficking investigation, adherents of various Qanon conspiracies all rushed to his defense — but in recent days have piped down following news that Florida politico Joel Greenberg, a close Gaetz ally and reported fountainhead of the DOJ investigation, is cooperating with investigators, according to Chicago Sun-Times columnist Michael Sneed.

A mocking billboard even went up in Gaetz' northwest Florida district recently that read "MATT GAETZ WANTS TO 'DATE' YOUR CHILD." — and organizers say they already have plans for a second.