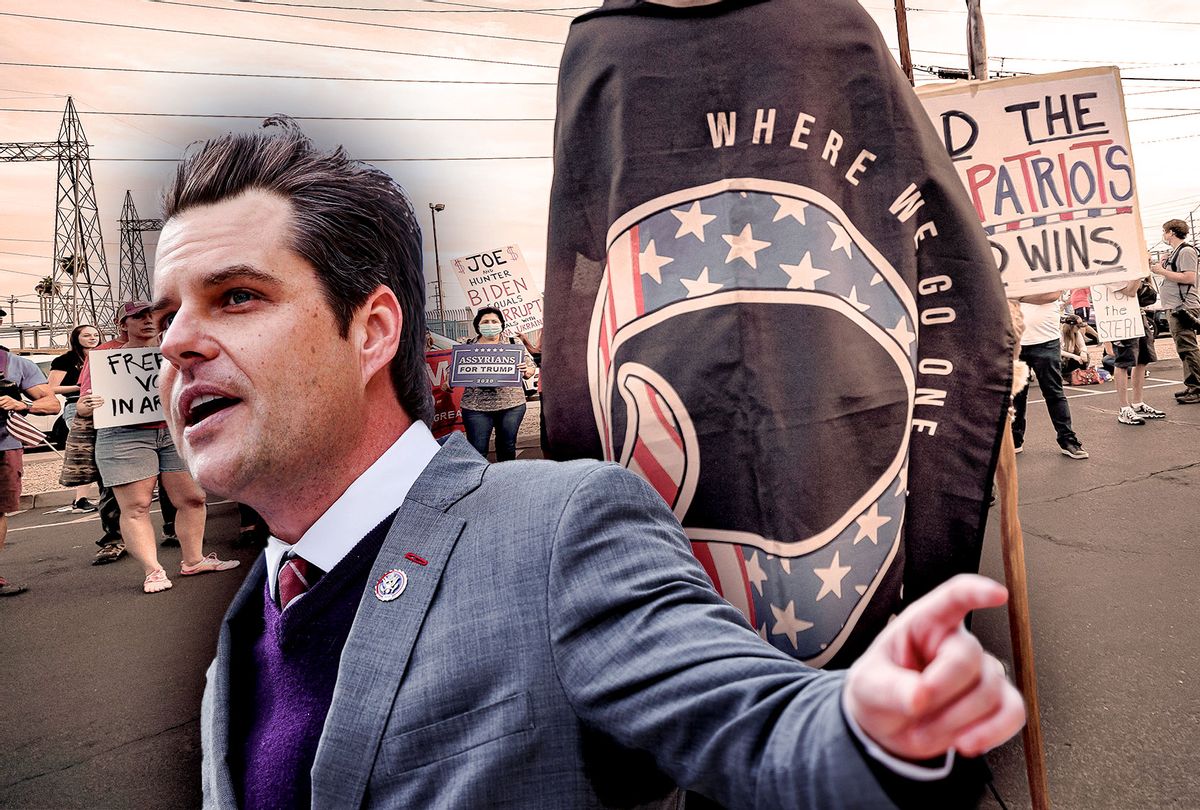 Far-right QAnon belivers, while they claim to be against the sex trafficking of children, have quickly come to the defense of Rep. Matt Gaetz, R-Fla., following The New York Times report that the Department of Justice has opened an investigation over Gaetz's alleged sexual relationship with a 17-year-old girl whose travel expenses he paid.

QAnon supporters claim to believe in an event called "The Storm," scheduled for a constantly-receding future date, which would bring about mass arrests of Democrats who have taken part in the trafficking of children. There is absolutely no evidence to support any aspect of that belief. "While the Storm is at the center of the QAnon narrative, it's also flexible enough to fold in just anything that makes the news," Daily Beast reporter Will Sommer noted in a QAnon explainer.

"Anything to ruin a reputation and cast doubt," one QAnon support wrote on Telegram, following the news breaking about Gaetz on Tuesday night. "Set up. Got to love the crap they pull with these unarmed [sic] sources," another wrote. "This is a smear by [Nancy] Pelosi," added a different QAnon follower. "The left is trying really hard to get Gaetz out of Congress, sounds more like their [sic] panicking!!!" another penned in the large group chat of believers. "I believe Matt," QAnon fan Laura Miller wrote, adding, "He will weather the storm. 3 unnamed sources?? Can you say hearsay???"

QAnon promoter Liz Crokin, who was recently featured in the new HBO documentary series "Q: Into the Storm," wrote on Telegram, "Gee, I can't imagine why the Deep State would want to frame Rep. Gaetz."

Other screenshots of QAnon followers speaking among themselves in group messages have since have made their way to Twitter.

Q followers voice their support of Florida Congressman Matt Gaetz, who has been accused of sex trafficking a minor.

Supporters of the Q theory often defend their conspiracy-based movement by claiming that they are anti-pedophilia and anti-sex trafficking activists. pic.twitter.com/E2e90nkUer

Logan Strain, who co-hosts QAnon Anonymous, a podcast that debunks the lies espoused by QAnon adherents, under the pseudonym Travis View, says believers are backing Gaetz's claim that he is the victim of an elaborate scheme to extort him and his family. "The majority of QAnon followers I've seen on Telegram, Gab, and other platforms buy into Gaetz's accusation that he is the victim of blackmail. They also often believe that these accusations are the product of a smear campaign," Strain told Salon. "Since Gaetz has been a staunch Trump ally, and QAnon followers still believe that Trump is the savior of mankind, they're willing to give him the benefit of the doubt."

QAnon researcher Mike Rothschild, author of the new book "The Storm is Upon Us: How QAnon Became a Movement, Cult, and Conspiracy Theory of Everything," Mike Rothschild says the conspiracy theorists, who claim Democrats are running a secret sex trafficking rings, are "believing the blackmail story" being told by Gaetz. "So far, the big promoters are all over the place, but I'm seeing a lot of 'the deep state framed him' and unthinkingly believing the blackmail story," Rothschild told Salon. "They also don't get that the investigation started during the Trump administration and think it's Biden (or his handlers) trying to take out a potential 2024 threat."

"Matt Gaetz has spun news of the investigation, at least partially, as a fight happening between him and the deep state. That's something Trump often did when he found himself amid a scandal, to the roar of his supporters," Jared Holt, a resident fellow at The Atlantic Council's Digital Forensic Research Lab, told Salon on Wednesday afternoon. "One would think that a community like QAnon that's supposedly concerned with sexual crimes against children would rejoice at news of the Gaetz investigation, or that they might be more curious as to the details, but much of the community seems more excited about a clash with the deep state."

NBC News reporter Ben Collins, after looking into the QAnon messages boards on Tuesday night, tweeted, "For some reason, QAnon people are refusing to take their dream scenario coming true — a sitting congressman being investigated for child trafficking — at face value. They love Gaetz's inscrutable double agent story because it sounds like 5D chess."

"For three and a half years, QAnon followers have been waiting for a child sex-trafficking scandal involving high-profile lawmakers to be uncovered, and the alleged existence of a vast ring of elite child abusers lies at the center of the QAnon belief system," VICE News noted on Wednesday. "But QAnon's unhinged fantasies were based on Democratic and liberal Hollywood elites orchestrating a global child sex trafficking ring — not on allegations that an ultra-conservative MAGA Republican and staunch ally of QAnon messiah Donald Trump was having sex with a teenager and paying for her travels."

Note: This story has been updated to reflect reporting by the Washington Post that Travis View is a pseudonym used by podcast host Logan Strain.