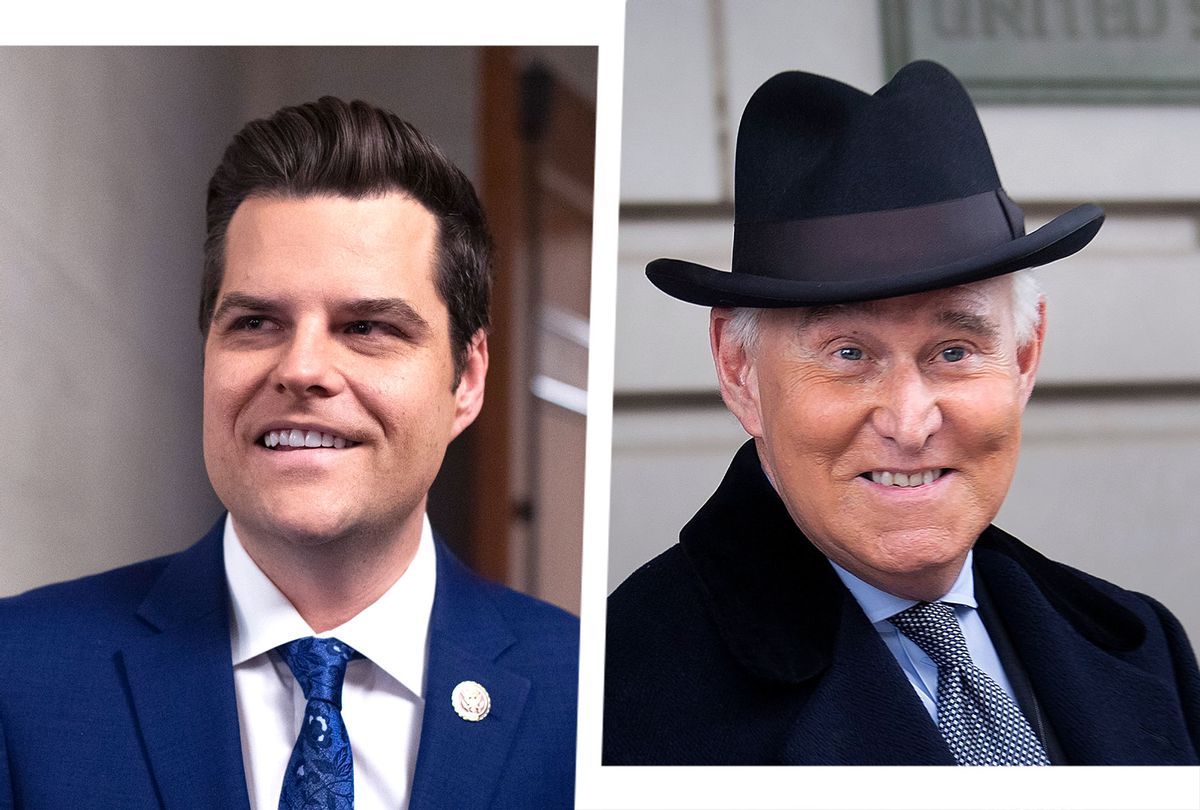 Republican operative and pro-Trump dirty trickster Roger Stone, a man well acquainted with indictment (in his case for lying to Congress and witness tampering), is urging Rep. Matt Gaetz, R-Fla., the charismatic Trump ally now embroiled in seemingly bottomless scandal, to potentially incriminate himself further by going on "offense" and continuing to appear on cable news.

"He needs to go on offense, this is right upfront in Stone's Rules," Stone told conspiracy theorist Alex Jones on his Infowars program. "The left-wing, non-journalist, fake-news media are the most vicious, malicious, dishonest people that I have ever come across," the GOP operative continued. "All of these stories that are maligning Matt Gaetz today are based on leaks. Where is the beef? Where are the facts? I don't think there are any facts. I think this is a good old-fashioned smear." Later in the segment, Stone encouraged Gaetz to stay in the public eye, not hide in a "hole," and make additional TV appearances. "He [Matt Gaetz] should not go hide in a hole, he should be out there, like he was on Tucker [Carlson] last night," Stone added.

As additional allegations about Gaetz continue to surface, Stone has kept on defending him enthusiastically, despite a Thursday night CNN report that Gaetz showed off nude pictures and videos of women he had sex with to fellow lawmakers on the House floor. "CNN Doesn't identify the lawmakers making these FAKE allegations against Gaetz because they have no evidence or documentation. Loathsome bottom feeders," Stone wrote on Parler after the story broke.

Stone didn't return multiple requests for comment from Salon as to why he continues to back Gaetz. The veteran GOP operative has refused to speak to this reporter after learning he now works for Salon, claiming that this site isn't a "legitimate news organization."

Following the initial report about the Department of Justice probe of Gaetz's personal life that emerged on Tuesday from The New York Times, Stone wrote on Parler, "I am going to public humiliate [sic] New York Times reporter Mike Schmidt tomorrow. He is the single most dishonest fabricator of the Russian hoax narrative in American press corps. And now he's doing it again with the smear of Matt Gaetz. Watch for the slap-down of this cretin."

No discernible "slap-down" came from Stone on Wednesday, although he continued to attack the media in Parler posts, writing: "The 'leaked' smear on Congressman Matt Gaetz is an extortion play and an effort to destroy the up-and-coming conservative leader who has the balls to call the left out."

In other Stone-adjacent news, two additional members of the Oath Keepers militia-style group, who were part of Stone's security detail on Jan. 6, were added to a conspiracy indictment relating to the Capitol siege, which court documents allege that Oath Keepers founder Stewart Rhodes helped to spearhead.

The Washington Post summarized those charges in a report published on Thursday:

Oath Keepers founder Stewart Rhodes, his deputy, and three members who guarded Roger Stone exchanged nearly 20 phone calls over three hours on Jan. 6, coinciding with the first assault on police barricades protecting the U.S. Capitol and spanning the time the three members breached the building, prosecutors charged Thursday. In a new indictment adding previously charged Stone guards Joshua James, 33, of Arab, Ala., and Roberto Minuta, 36, of Prosper, Tex., to an Oath Keepers conspiracy case that now has 12 defendants, prosecutors bluntly laid a path to Rhodes and a person they said he put in charge of his group's operations that day.