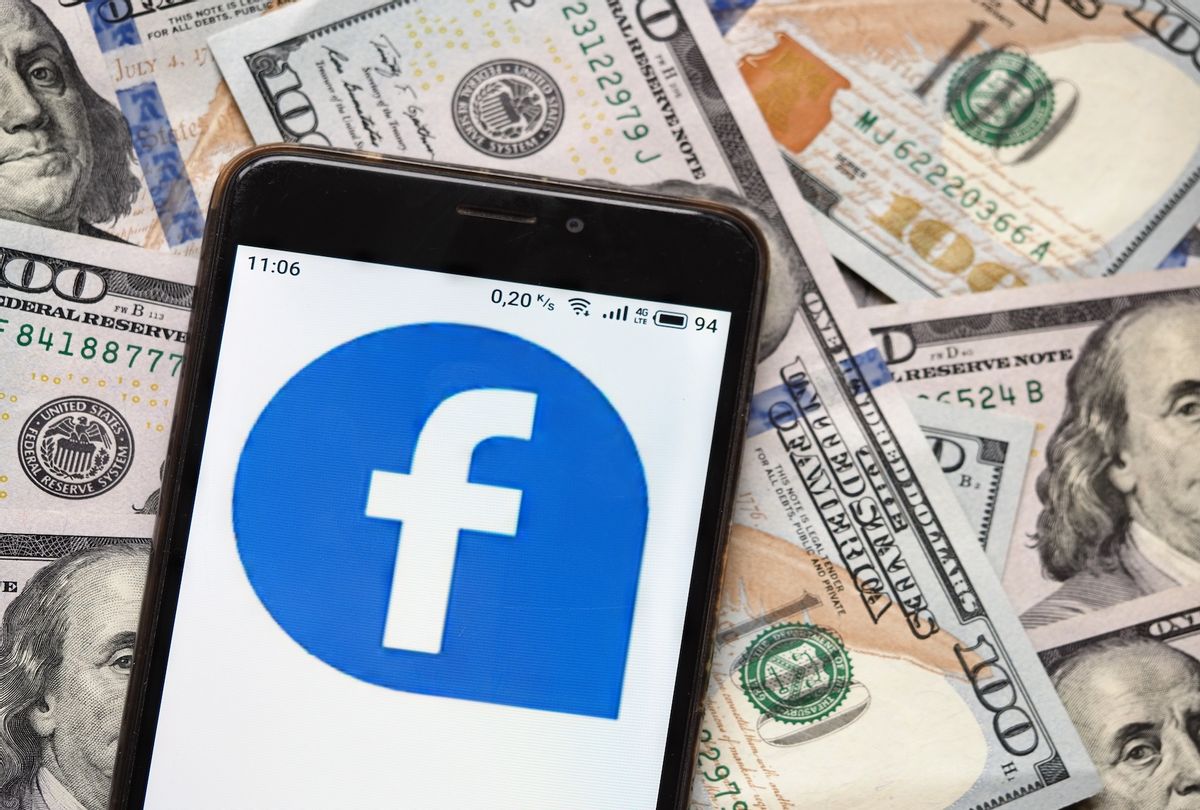 Facebook logo seen displayed on a smartphone with 100 dollar bills in the background. (Photo Illustration by Igor Golovniov/SOPA Images/LightRocket via Getty Images)
--

I understand the temptation for the leaders of news organizations to take millions of dollars of free money from Facebook — despite, or even because of, all the damage the company has done to our industry and the public discourse.

But I don't understand the willingness of the news executives to keep it secret.

My article in the Washington Monthly on Monday revealed how, under the cover of launching a news "tab" that as far as I can tell doesn't effectively serve any other purpose, Facebook in 2019 started delivering massive amounts of cash to the most influential news outlets in America — on the condition that they not reveal the details.

The urgent need for full disclosure of these secret agreements with Facebook is the most obvious takeaway from my research into the multimillion-dollar "Facebook News" scheme. The deals were widely hailed at the time as establishing that the social media behemoth would henceforth pay for news. But what they really demonstrated was the continued death grip Facebook has on the news industry, and the profound submissiveness of the country's top newsroom executives.

In an effort that Damon Kiesow, a professor at the University of Missouri School of Journalism, described to me as being "flavored with a strong dose of crisis communication and regulation avoidance," Facebook chose the New York Times, the Washington Post, the Wall Street Journal, ABC News, Bloomberg, BuzzFeed and other select outlets to be their "paid partners."

We don't know how much they get per year, because they agreed not to tell. A Facebook spokesperson told me a Wall Street Journal report that outlets were getting up to $3 million a year was "not too far off," but that statement was belied by former New York Times CEO Mark Thompson, who told me the Times is getting "far, far more."

Certain other outlets were selected by Facebook to appear in the new section, but without getting paid. As we already know, news organizations generally pay Facebook to send them traffic, not the other way around.

So the money is basically a gift to news outlets that have political clout — and accepting such a gift creates an obvious conflict of interest. The paid "partners" are effectively giving the appearance of legitimacy — indeed, of benevolence — to a company engaged in choking out the news industry even as it provides oxygen to conspiracy theories and lies. And it leaves the smaller, ethnic and local news organizations that really need the help to die.

I fully recognize that a fair and elegant solution to Facebook's profoundly destructive influence on the free press and democracy is not something we can practically expect in the short term. So the best argument in support of the decision to take the money is: What were they supposed to do, not take the money?

But that's no excuse for keeping it secret. Facebook's demand for secrecy should have been publicly rejected by outraged news executives.

Going forward, news organizations should not only disclose to readers what they're getting, and under what circumstances, but should also append public disclosures whenever they write about Facebook.

They should publicly acknowledge that taking money from Facebook creates a relationship, and they should be up front about what that relationship entails and signifies.

They should provide evidence that neither their news nor opinion sides have been compromised by those deals. I'm not saying anyone in particular has gone easy on Facebook on account of the money, but my view (and I recognize I'm a bit of an extremist here) is that the only way to show the absence of any sense of obligation is to bite the hand that feeds you — extra hard.

I wrote the article about Facebook News on a freelance assignment from the Open Markets Institute's Center for Journalism & Liberty, as part of the group's work to ensure that a fully independent news media survives the ravages of the Facebook and Google duopoly.

There was a lot of talk about the article at the group's all-day conference on the future of journalism and democracy on Tuesday. Rep. David Cicilline, D-R.I., chair of the House Judiciary antitrust subcommittee, cited it as evidence of how Facebook and Google continue to "have tremendous sway over journalism with their monopoly power over digital advertising and their role as gatekeepers online."

I discussed the article on a panel that included, among others, Ben Smith, the media columnist for the New York Times who was formerly BuzzFeed News editor-in-chief — and who, it turns out, negotiated BuzzFeed's deal with Facebook News. (He said that discussion was "very one-sided," with Facebook presenting a figure that was "an estimate that I believe they gave roughly off how much BuzzFeed was being consumed on Facebook, which was a lot.")

My article called particular attention to the New York Times' relationship with Facebook, in part because the Times' former CEO had been so passionate and eloquent about the danger the company presented to journalism — until he took their money, that is.

I asked Smith if he agreed that the Times should at least disclose that it has a deal with Facebook when writing about the company. Smith said he had "thought about this a lot" when he was at BuzzFeed. "I would rather talk about that, although my opinion would be the same," he said, "which is that if we are writing about Facebook … when we were writing about anything vaguely related to Facebook news initiatives, we disclose that we were taking their money, that we were in a business relationship with them."

Smith made the point that "news media companies increasingly have financial relationships all over the map. I guess there is sort of a balance of where should you disclose it."

But in the case of Facebook News, he said, "I don't think it should be hidden or concealed. Certainly when you're writing about anything related to that program, you should disclose it. Maybe you should have a page on the site where you disclose all of that stuff, actually? It's not crazy for readers to wonder whether it affects journalism."

Indeed, BuzzFeed did disclose (vaguely) that it received compensation from Facebook News in August 2020, in a story about Facebook's handling of inflammatory or misleading posts from Donald Trump, and in a February story revealing New York Times columnist David Brooks' previously undisclosed relationship with Facebook.

By contrast, there has been no similar disclosure by the New York Times, even when explicitly writing about Facebook paying Rupert Murdoch's News Corp. for its journalism content in Australia, or about news consumption on Facebook and tweaked algorithms for news.

Richard Tofel, the president of ProPublica, tweeted that he didn't agree with everything in my article, but said, "I do think there should be disclosure in news stories about entities with which a news org has a significant commercial link."