Meet the "caribou of the Cretaceous": How ancient hadrosaurs spread across Earth 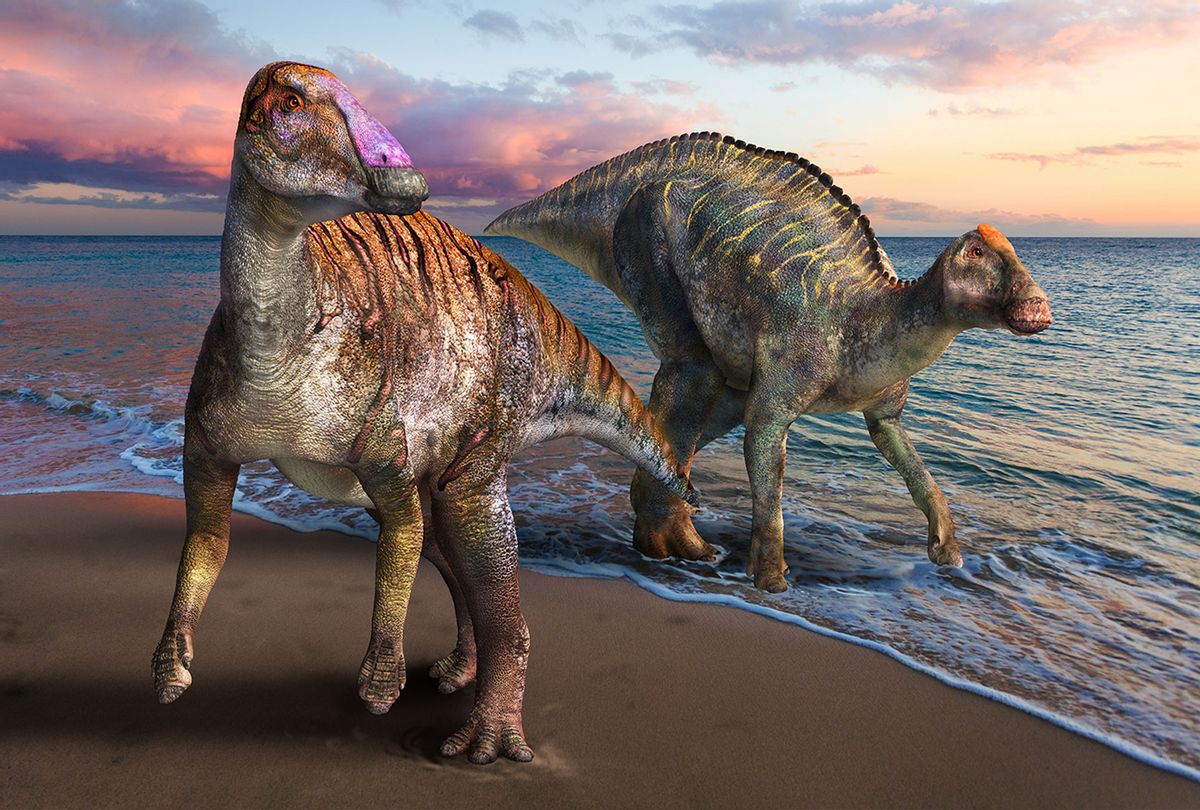 Reconstruction of Yamatosaurus with Kamuysaurus in the background (Masato Hattori)
--

You may not know the term "hadrosaur," but you can probably visualize the dinosaur it refers to. Also known as the "duck-billed dinosaur" because the bones in their snouts look like the beaks on ducks, hadrosaurs had long bodies; in some cases, they possessed protuberances on their faces or backs that gave them a distinctive look. Unlike the terrifying T. Rex, hadrosaurs were herbivores, meaning they only ate plants. They were also quite numerous during their heyday, so much so that they are the most commonly discovered of all dinosaurs.

That said, the new one uncovered by a team of researchers is still quite special.

In an article recently published in Scientific Reports, a group of Japanese and American scientists revealed that they had discovered a new type of hadrosaur that significantly changes what we know about the ancient beasts. The hadrosaur, which was found on one of Japan's southern islands and has been named Yamatosaurus izanagii, provides scientists with new insights into a type of dinosaur that one scholar told Salon was so abundant during the Late Cretaceous period "that they are sometimes referred to as 'the cows of the Cretaceous.'"

"In the far north where I normally work we call them the caribou of the Cretaceous," Anthony R. Fiorillo, a co-author of the paper, told Salon by email.

Hadrosaurs have been found on most continents, but the new discovery could help explain how they became so geographically diverse. Paleontologists already know that dinosaurs during the Cretaceous period traveled between North America and Asia using the Bering Land Bridge, a now-submerged land area that once connected eastern Russia with western Alaska.

"What Yamatosaurus tells us is that the larger group, the hadrosaurs, likely evolved in the Eurasian continent during the Cretaceous and used the Bering Land Bridge to populate western North America," Fiorillo observed. "In other words, Yamatosaurus informs us of the direction of the dispersal of this important group of animals."

"To go a little further, there is a perception that as organisms evolve, the more primitive forms die out," Fiorillo told Salon. "And while that is often the case, it is not always the case. Yamatosaurus as a primitive form of hadrosaur lived at the same time as a more advanced hadrosaur, Kamuysaurus (a duck-billed dinosaur from Japan which we named in 2019 — and it is closely related to our Arctic duck-billed dinosaur, Edmontosaurus)."

The fact that these two animals lived near each other, geographically and chronologically, suggests that this region of Japan was a "refugium," or an area where animals can survive in times when conditions are unfavorable.

The new dinosaur's name comes from Yamato, the ancient name for Japan, and Izanagi, a Japanese mythological god who supposedly created the Japanese islands including Awaji Island, where the Yamatosaurus was discovered. According to the scientists, it was found at a cement industry quarry after fossils were revealed in "blocks of dark grey mudstones." It was discovered in an area where a number of other vertebrate, invertebrate and plant fossils have also been found.