"I rented a room from Frank for a couple of months," McCarthy admitted to Fox News 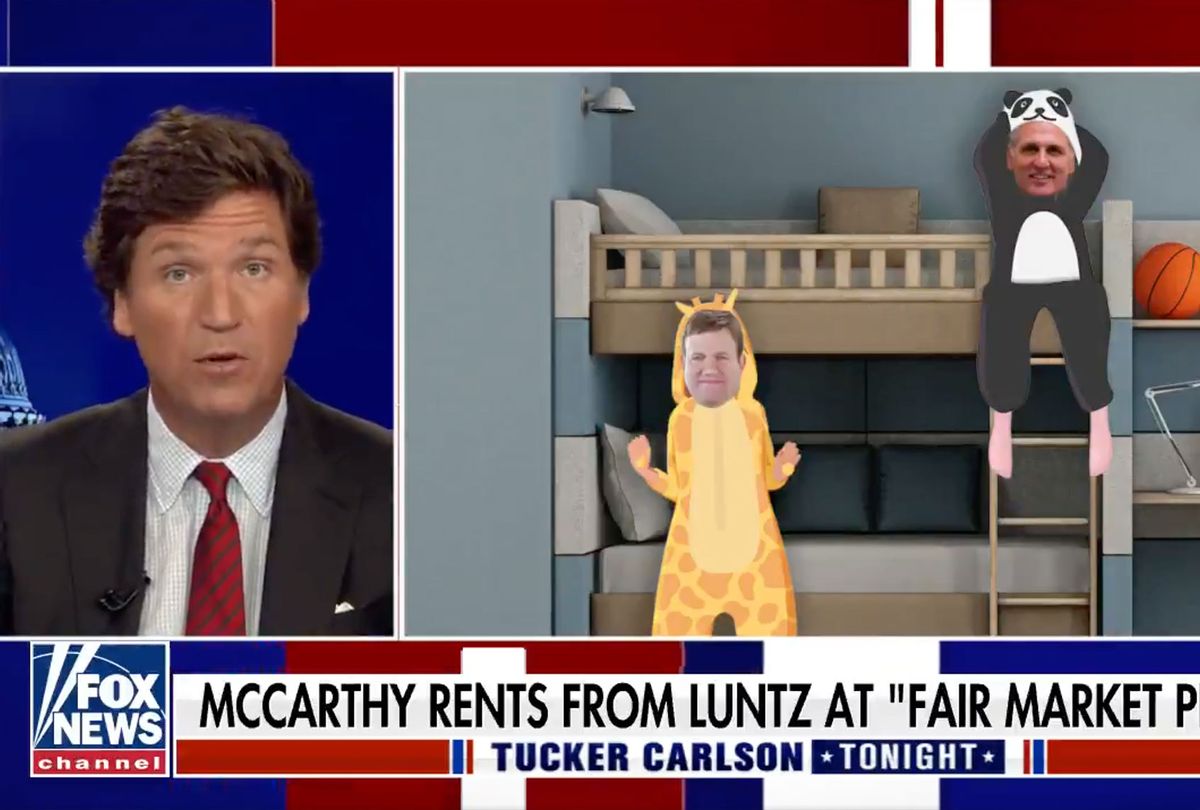 "Why do Republican officials listen more carefully to Frank Luntz than they do their own voters?" the Fox host asked at one point during his opening monologue on Monday evening. Carlson further floated that Luntz lobbies on behalf of "some of the world's most left-wing corporations."

The Fox News host first began on this journey to destroy Luntz, who claims to have a "personal friendship" with McCarthy, last week. "That relationship gives Luntz outsized influence over the Republican Party's policy positions," Carlson said on Friday. Carlson returned to the attack on Monday after he said he received a news tip about McCarthy rooming with Luntz in Washington, D.C.

"Over the weekend, we got a call from a source who said that, in fact, Frank Luntz and Kevin McCarthy are not simply friends; they're roommates," Carlson stated. "Kevin McCarthy lives in Luntz's apartment in downtown Washington. That's what we were told, and honestly, we did not believe it. The top Republican in the House lives with a Google lobbyist? Come on. Even by the sleazy and corrupt standards of politics in Washington, that didn't seem possible. In fact, it sounded like a joke."

The Fox News host went onto tell his viewers that following a bit of pressure, a McCarthy spokesperson would later fess up to the two living together.

"This morning, since we heard it, we called to check with Kevin McCarthy's spokeswoman, and when we raised this, she all but chuckled at the suggestion, 'No when he's in Washington,' she told us, 'Kevin McCarthy rents hotel rooms or sleeps in his office in the Capitol. He certainly isn't living with Frank Luntz.' Okay, and that seemed logical to us, but we did press a little bit because we got the tip from someone reliable, and we just wanted to be sure. So the spokeswoman said she would get back to us."

Frank Luntz & Kevin McCarthy. Not only are they friends. They are roommates. pic.twitter.com/nYGXxV5bya

"Two hours later, we got this text. Quote: 'Following up on our conversation from earlier today. Because of the pandemic, McCarthy has rented a room in Washington at a fair market price from Frank,'" Carlson added.

Notably, the Monday reporting from Carlson received some recognition from those who might not endorse Carlson's nightly far-right rhetoric. Pod Save America co-host and founder of Crooked Media Tommy Vietor tweeted, "This is actually some good reporting. It's quite odd that @GOPLeader lives with Frank Luntz, and McCarthy's flak trying to spin it as a covid thing makes no sense."

While the alleged rent agreement might be news, those who cover politics in Washington D.C. know McCarthy and Luntz are close friends. On November 14th, 2020, I snapped this photo of the House Minority leader stopping to speak with George Papadopoulos while walking around the city with Luntz. 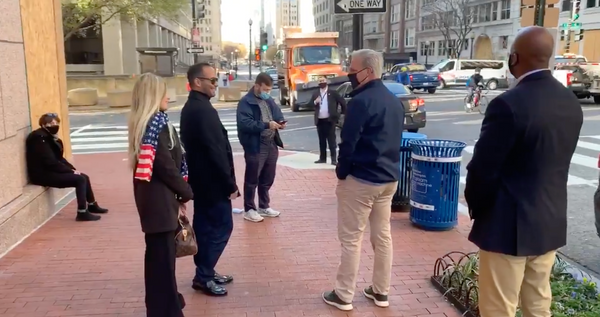 On Tuesday morning, McCarthy confirmed he was living with Luntz and attempted to redirect Carlson's anger on the matter.

"I didn't know how this was controversial," McCarthy told "Fox and Freinds" co-host Steve Doocy. "I met him [Luntz] with Newt Gingrich back when they were working on the 'Contract for America.' As the Democrats took over, they started changing the House around so, yeah, I rented a room from Frank for a couple of months, but I'm going back to on my couch in my office," McCarthy stated.

Kevin McCarthy confirms that he was living with @FrankLuntz pic.twitter.com/ijR3J7YII5

"He seems upset," McCarthy added speaking about Tucker Carlson. "I think [Luntz] and Tucker must dislike each other - and they need to get together and solve whatever difficulties because we've got to make sure that we put this country back on the right track."

With the GOP war between Carlson and Luntz becoming ever so more heated, the majority of pro-Trump pundits are taking the side of the Fox News host. "Frank Luntz has always been a democrat operative," MAGA personality Brigitte Gabriel tweeted. Right-wing radio host Wayne Dupree wrote: "Nobody deserves this brutal OUTING more than Frank 'Dunce' Luntz."

"I just watched the full segment and wowwww...Tucker outed Frank Luntz tonight as the First Lady of the House Republicans," former Trump lawyer Jenna Ellis remarked on Monday night. Former 2020 Trump campaign flack Steve Cortes added: "As I stated last November publicly, Frank Luntz had a weird fixation with me. I challenged him to a man-to-man debate. He p*ssed out, of course. Frank is the worst kind of grifter — and @GOPLeader has a LOT of explaining to do."

You can watch the entire Carlson segment below, via Fox News: