Tucker Carlson, the Chauvin verdict and the burden of "white civilization"

Tucker Carlson called Chauvin's conviction "an attack on civilization." He had a specific definition in mind 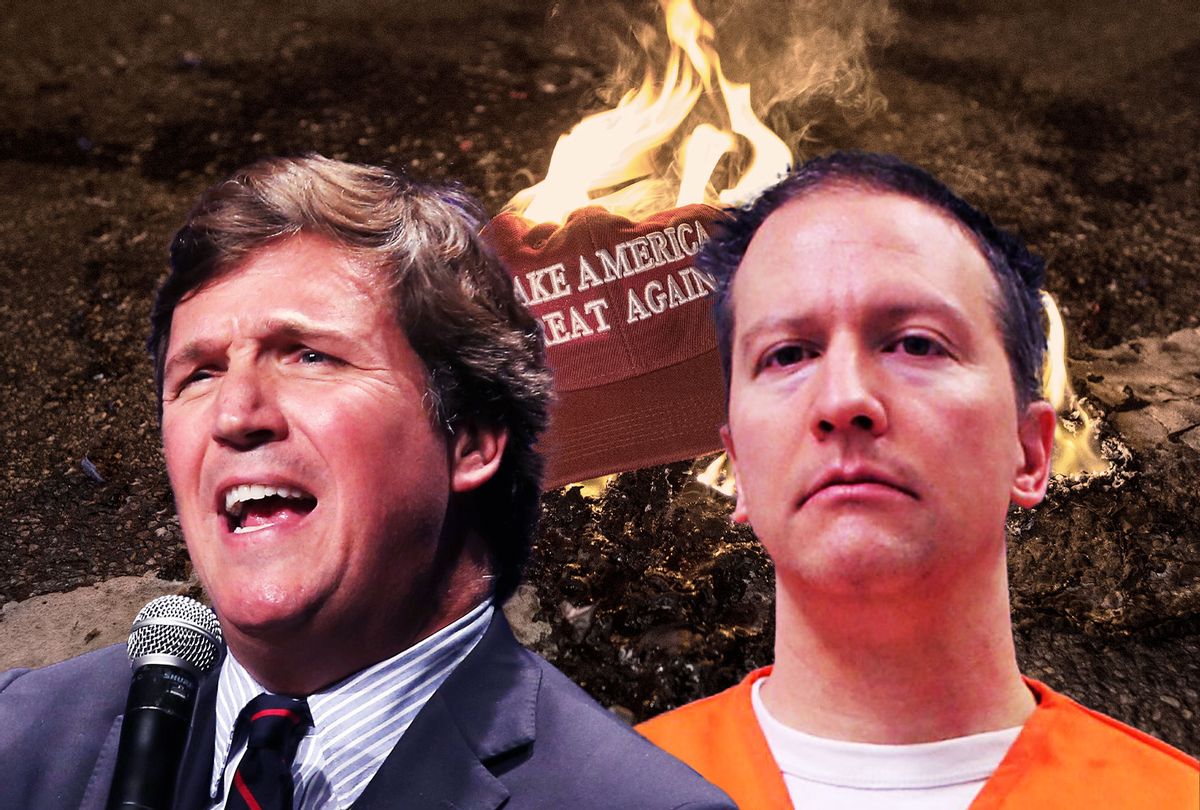 On a near-nightly basis, Fox News primetime host Tucker Carlson conducts master classes in white supremacy and hate for his millions of viewers, nearly all of them white conservatives. His latest lesson involves the paranoid fiction that nonwhite people are coming to America to "replace" the majority white population, and that by implication the existence of the "white race" is imperiled both in the United States and around the world.

In his white supremacy tutelage, Carlson also routinely rages at the enemies of the MAGAverse and "real America," especially Black and brown people (and their white allies) in the pro-human rights and democracy movement known as Black Lives Matter. Their crime, for Carlson and his viewers? Demanding that the human and civil rights of Black people, and others marginalized in American society, be respected and protected.

Carlson is highly effective: White supremacists have repeatedly praised him for helping to mainstream their vile ideology among the millions of people who watch Fox News. In fact, the "Daily Show" has created a video montage of Tucker Carlson channeling the same language and ideas as white supremacist mass shooters.

Carlson also condones if not outright encourages fascism and other attacks on America's multiracial democracy. His staff of writers has included at least one overt white supremacist.

That emptiness leads to a deep moral and ethical rot for those who are sick with white supremacy. A new poll from CBS News/YouGov news show that 46 percent of Republicans believe that Derek Chauvin's conviction for murdering George Floyd was the wrong verdict.

These Republicans reject the following facts: Before a crowd, in broad daylight and while being video recorded, Chauvin put his knee on George Floyd's neck for more than nine minutes as Floyd pleaded for his life, calling for his mother while gasping, "I can't breathe." Chauvin posed almost like a big game hunter in Africa taking down his prey, who happened to be a defenseless human being. Chauvin's facial expression was a mix of indifference and mockery as he snuffed out a Black man's life. The evidence was overwhelming and the prosecution's presentation of the evidence was flawless. The jurors assessed the totality of the evidence and rapidly came to the only reasonable conclusion.

As others have observed, according to that CBS News/YouGov poll, nearly half of today's Republicans support the cold-blooded police murder of black people. This is further proof that today's Republican Party is the largest white supremacist terror organization in the world.

At Fox News and across the right-wing echo chamber, there were cries of "injustice" that the verdict was illegitimate because the jurors somehow had been "intimidated" or "terrorized" by members of the Black Lives Matter movement. Of course, no such thing had occurred.

As I explained in an earlier essay here at Salon, the white right reacted to the Chauvin verdict as though it had suffered a personal and collective narcissistic injury. The very premise that a white police officer could be held accountable for killing a Black person is inconceivable to those who are invested in protecting and maintaining white privilege — especially when that privilege encompasses the "freedom" to kill or injure Black and brown people without fear of consequence.

In response to the Chauvin verdict, Tucker Carlson gave one of his greatest performances of deranged white rage. On last Tuesday's edition of his primetime show, Carlson interviewed Ed Gavin, an official with the New York City Department of Corrections and former deputy sheriff. Once it became clear that Gavin disagreed with Carlson, suggesting that the verdict in the Chauvin murder trial was reasonable one and that Chauvin had behaved "savagely" in killing George Floyd, Carlson abruptly ended the interview.

During that same show, Carlson said the following:

But here's what we can't debate. No mob has the right to destroy our cities. Not under any circumstances, not for any reason.

Before we consider the details of Tuesday's verdict, a bigger question, one we should all think about: Can we trust the way this decision was made?

No politician or media figure has the right to intimidate a jury. And no political party has the right to impose a different standard of justice on its own supporters. These things are unacceptable in America. All of them are happening now.

If they continue to happen, decent, productive people will leave. The country as we know it will be over. So we must stop this current insanity. It's an attack on civilization.

This is all standard white victimology. These comments offer also another example of the way Carlson and other right-wing bloviators and propagandists use the Big Lie, along with other little lies, to create an alternate reality for their followers. Carlson, like other Fox News personalities, was also engaging in stochastic terrorism. But his comments about "civilization" were perhaps the most revealing of his public and private allegiance to white supremacy.

One could almost hear Mahatma Gandhi's famous rejoinder when asked what he thought about "Western civilization": "I think it would be a good idea."

When Carlson speaks about "civilization," of course, he means to imply "white" or "Anglo-Saxon" civilization. Such language has been used for centuries in the West to legitimate white supremacy and day-to-day white dominance over nonwhites as something that is normal, or even ideal.

By implication and context, Carlson's "civilization" is under threat from Black and brown people and others who are using their constitutionally-guaranteed rights to protest and organize against injustice in America.

In reality, there is no Black mob burning down America's cities. The vast majority of Black Lives Matter and other protests against police thuggery have been peaceful. The most extreme violence has been caused by right-wing infiltrators and agents provocateurs. Police and other law enforcement have on several occasions and in various places instigated their own riots by overreacting to peaceful protests.

What is this civilization that Carlson is pleading for the police to defend? In the logic of cop propaganda and mythology, is it that "thin blue line" between "civilization" and "chaos" that America's police supposedly maintain? In that version of civilization, Carlson's police should be allowed to be judge, jury and executioners in their dealings with nonwhite people and others deemed to be members of a "criminal class."

For Carlson and others who share his beliefs about "civilization," police like Derek Chauvin are to be elevated as heroes rather than condemned for their criminal and thuggish behavior.

In the MAGAverse and the right-wing echo chamber more broadly, America's police are viewed as the defenders of civilization, which in practice means that they serve the interests of the rich and powerful against the human rights and dignity of Black and brown people, the poor and other marginalized groups.

Carlson's spirited defense of "civilization" and his rebooted version of Rudyard Kipling's "The White Man's Burden" also leads to many questions. Was it "civilized" when Trump's followers launched a lethal attack on the U.S. Capitol as part of an attempt to overthrow democracy?

Are Trump's white supremacist insurrectionists and other terrorists defending "civilization"? Was it "civilized" when the Trump regime and the Republican death cult engaged in acts of democide against the American people by sabotaging relief efforts and refusing to properly respond to the coronavirus pandemic?

What of Tucker Carlson's "civilization," in which the Republican Party poses a threat to survival of the world because it refuses to enact legislation that will slow down the global climate disaster?

Are the Republican Party, the Trump movement and its allies and followers being "civilized" when they try to impose a new Jim Crow apartheid regime on Black and brown Americans?

Is it "civilized" to have a society with such extreme social inequality that a very small number of millionaires and billionaires control a "democratic" political system, and indeed our society as a whole?

What of Tucker Carlson's "civilization," in which America leads the world in gun violence and mass shootings?

How will Tucker Carlson's "civilization" thrive when America's infrastructure is crumbling and its schools, hospitals and other vital services are a global embarrassment?

How great is Tucker Carlson's "civilization" when America incarcerates more people per capita than any country in the world?

And a final question on Tucker Carlson's "civilization": Have he or others of his tribe ever seen an incident in which a police officer has killed or otherwise abused a Black or brown person and deemed that behavior worthy of criminal prosecution?

The answer, in all likelihood, is no. To borrow from author, historian and social theorist Sven Lindqvist, their definition of "civilization" requires that the brown and Black "brutes" must submit to white authority and white power or be killed.

Ultimately Tucker Carlson's civilization, like that envisioned by other racial authoritarians, is one in which black and brown people are a problem to be solved.

There is a huge hole, and a painful lie, at the heart of Tucker Carlson and the white right's vision of "white civilization." As social theorist Robert Jensen has observed: "The world does not need white people to civilize others. The real White People's Burden is to civilize ourselves."