Our expectations are so low that conviction for a blatant, obvious murder feels like redemption. That's not enough 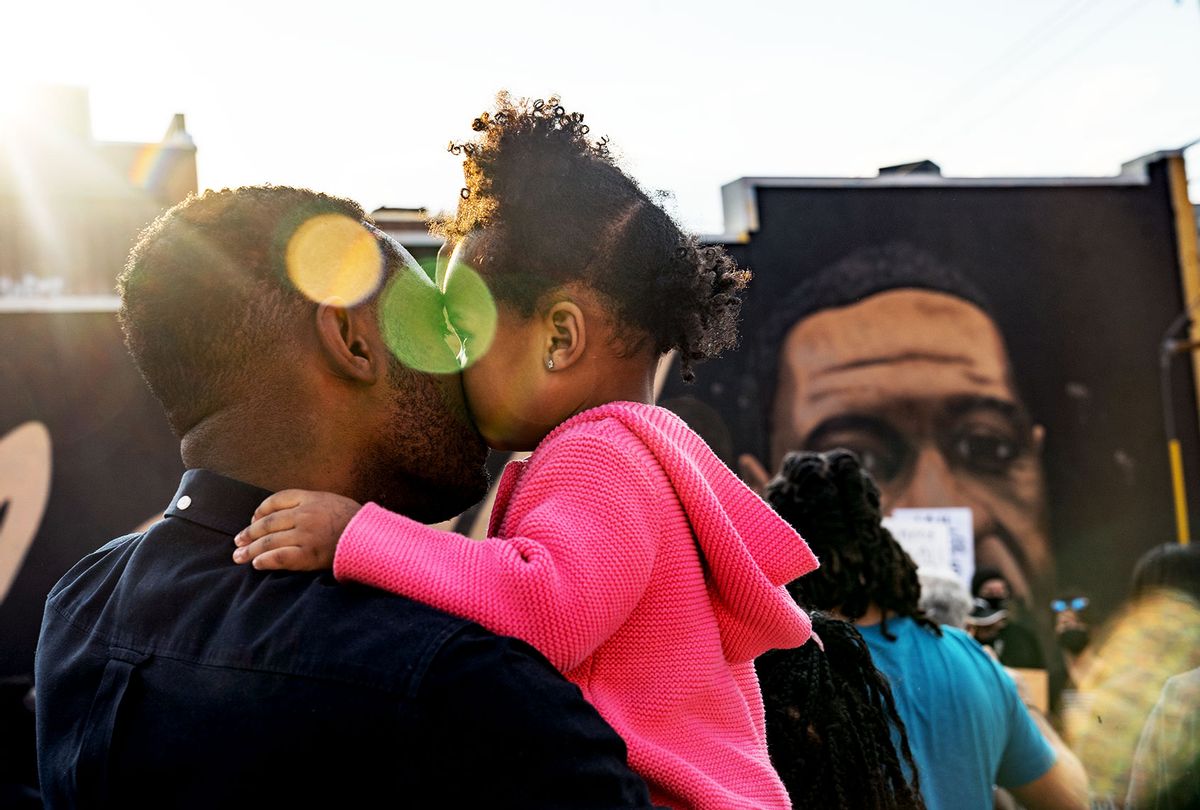 OJ Adeyemi and daughter Adenike listen to people speak before they march through the streets after the verdict was announced for Derek Chauvin on April 20, 2021 in Atlanta, United States. Former police officer Derek Chauvin was on trial on second-degree murder, third-degree murder and second-degree manslaughter charges in the death of George Floyd May 25, 2020. After video was released of then-officer Chauvin kneeling on Floyds neck for nine minutes and twenty-nine seconds, protests broke out across the U.S. and around the world. The jury found Chauvin guilty on all three charges. (Megan Varner/Getty Images)
--

On Tuesday, Derek Chauvin, a former Minneapolis police officer, was found guilty on three counts of murder and manslaughter for the killing of George Floyd. Chauvin now faces a possible sentence of up to 40 years in prison, although the final sentence will likely be much shorter.

Police are almost never found guilty of murder and other serious crimes — and this is especially true when the victims are Black or brown and the police are white.

The United States and the world held their collective breath in anticipation of the verdict. If Chauvin had not been convicted, would we have seen another summer of uprisings and people's resistance as occurred last year in the immediate aftermath of Floyd's murder?

As he listened to the verdict, Derek Chauvin appeared stunned. He was socialized into believing that as a white police officer — and white man in America — he is above the law. The verdict was an existential injury to his personhood and social status as a white man. The predictably enraged responses by the white right shows that Chauvin's narcissistic injury in that moment was widely shared by many of those invested in a particular type of whiteness and white masculinity.

During that moment when Chauvin heard the verdict, the psychological wages of whiteness offered insufficient compensation for him and the white right. Yet white privilege always finds a way to endure: Chauvin will still receive a police pension potentially worth more than $1 million. He has also received substantial sums of money from online fundraisers.

There was cheering in the streets of Minnesota and other parts of the country by Black and brown folks, and a good number of white folks as well, in response to the fact that George Floyd's killer had been convicted of his obvious crimes. Many of Floyd's friends, family members and others in the Minneapolis community where he lived and was murdered cried and were otherwise overwhelmed with emotion.

Ultimately, for Americans of conscience there was a sense of relief and exhalation at the verdict.

The expectations are so low for America's racist legal system that Chauvin's conviction was still surprising and literally required dozens of witnesses; a video recording of Floyd being killed in broad daylight by a white police officer who crushed his neck while he cried out for his mother, and while a horrified crowd pleaded for Mr. Floyd's life; some of the best forensic experts in the country testifying on the prosecution's behalf; a near perfect presentation of the facts by the prosecutors; and police officers and the chief of police condemning one of their own for having acted in a criminal and irresponsible fashion.

It must not be overlooked that Chauvin's conviction also had an element of luck: No member of the jury chose to express allegiance to the police and "law and order" by refusing to convict an officer of murder.

The reactions by America's leaders and the mainstream news media to the trial's outcome also offer examples of how systems of power maintain their authority and legitimacy.

The media highlighted a narrative of "change," arguing that Chauvin's conviction could signal a new level of accountability for America's police. Other voices in the mainstream media spoke about police building trust with communities, suggesting that the message being sent by the conviction is that the vast majority of police are "good cops", since several appeared as witnesses against Chauvin. As part of this political theater, there were Black experts and other commentators featured on cable TV news and elsewhere who appeared ready to cry on command as they spoke of "justice", a "landmark" and a "history-making moment", and possibilities of "progress" toward a world where Black children will know that their lives cannot be taken with impunity by police violence.

President Joe Biden and Vice President Kamala Harris also offered their obligatory comments. Harris said, "We're going to make something good come out of this tragedy." Biden said that the conviction of Chauvin for murdering George Floyd was "a giant step forward in the march toward justice in America," adding, "No one should be above the law, and today's verdict sends that message. But it's not enough. We can't stop here."

Speaker of the House Nancy Pelosi made an odd and troubling comment: "Thank you, George Floyd for sacrificing your life for justice ... Because of you and because of thousands, millions of people around the world who came out for justice, your name will always be synonymous with justice."

Pelosi may have been well-intentioned, but she signaled to a deep undercurrent in American society: Black people's suffering and death is too often viewed through the white racial frame as a noble sacrifice and act of "generosity" for the redemption of White America's sins. But George Floyd is not a martyr, and surely had no desire to become one on the day he was murdered. Floyd simply wanted to continue living his life; it was Chauvin's cruel and reckless conduct that decided otherwise.

Alayna Treene and Kadia Goba of Axios summarized how the Chauvin conviction can now be exploited by political leaders to slow or stop substantive police and criminal justice reform:

The unanimous guilty verdicts against Derek Chauvin are a huge relief for Washington's political establishment but seem unlikely to rush in the systemic overhauls George Floyd's family and civil rights and progressive leaders seek.

The big picture: An acquittal or mistrial involving the former police officer would have unleashed violence and days more of protests — and added bipartisan pressure to act on criminal and police reform.

Senior Democratic and Republican aides — who would never let their bosses say so on the record — privately told Axios the convictions have lessened pressure for change.

Alex Vitale, a sociology professor at Brooklyn College, was even sharper in his truth-telling about the Chauvin conviction and what it reflects about police reform. On Twitter he wrote: "Chauvin was found guilty because he had to be to preserve the current system of policing. The Dept. turned against him to save itself."

John Plaff, a Fordham Law professor and criminologist, has similar concerns. On Twitter he pondered:

I genuinely wonder if a conviction, however much justice demands it, is actually — practically, empirically — a step forward.

Would an acquittal here push more ppl to demand more radical change? Does a conviction lead too many to think "the system corrects itself."

My understanding of what the Derek Chauvin trial means, or does not mean, for American society is filtered through a philosophical framework known as "Afropessimism".

Through that lens we can better see America as a type of living mausoleum powered and structured by the suffering, pain and death of Black people. "Necropolitics" is a defining feature of the global color line and reveals how American society is built upon the many ways that black people are excluded from equal membership in political, social and cultural life. Derek Chauvin's brutality against George Floyd, which was emblematic of a larger policing culture and law enforcement system, should not be seen as an aberration. It was the system working exactly as designed, if perhaps too much out in the open.

What then is my vision and hope for a future America in the aftermath of George Floyd's murder and Derek Chauvin's conviction? I want a country where I and others would not even have to ask whether a given Black or brown person would still be alive if — all else being equal — they had been white and had substantially the same encounter with America's police?

Yes, it's a low standard. But America has to start somewhere — and even that much will be seen as an extreme provocation by those who remain invested in our broken society as it exists today.