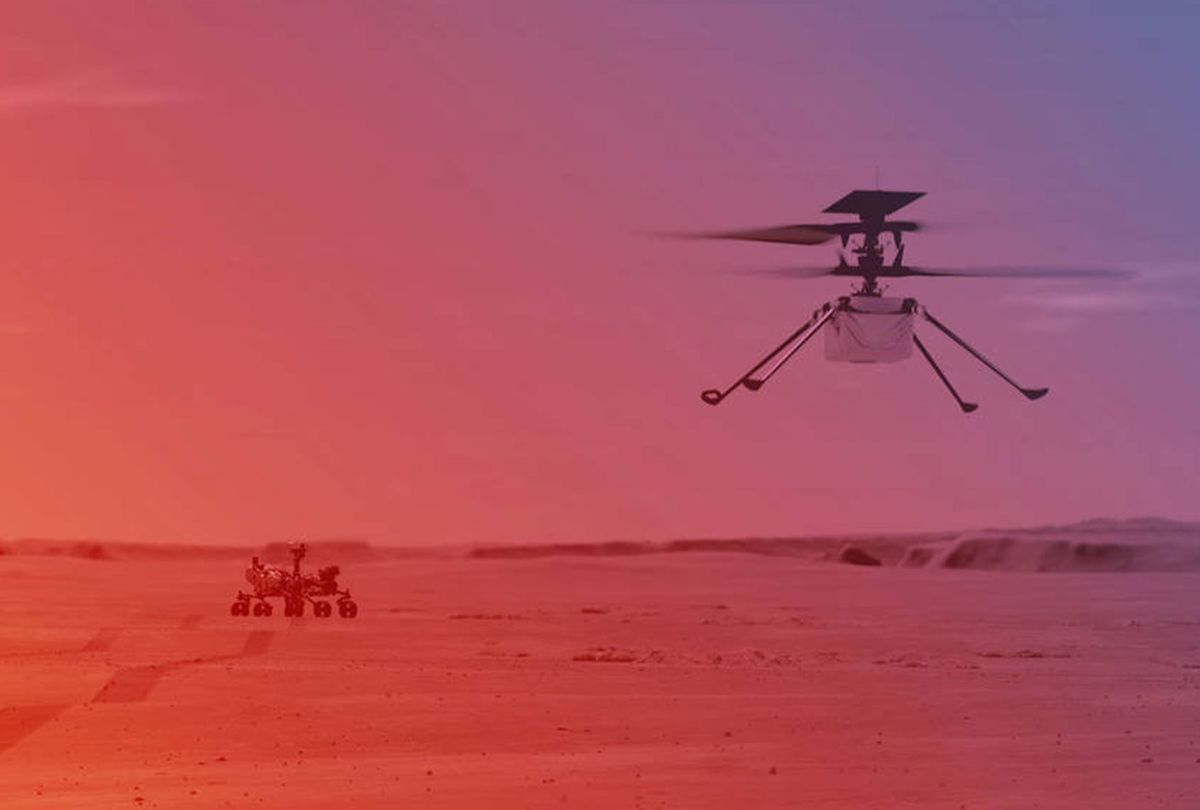 Ingenuity, the 4-pound helicopter that hitched a ride to Mars on Perseverance, continues to impress us here on Earth. Not only did the solar-powered helicopter overcome massive barriers to succeed in becoming the first powered-controlled flight on another planet, but it keeps breaking records and exceeding engineers' expectations.

As Salon previously reported, there was no guarantee that Ingenuity would even survive its first night alone before takeoff. Nightly temperatures on Mars plummet to minus 130 degrees Fahrenheit, as the Red Planet receives half the amount of solar energy that reaches Earth. Ingenuity could have frozen to death before taking flight.

Then, on April 30, 2021, the National Aeronautics and Space Administration (NASA) confirmed that Ingenuity accomplished a fourth flight — climbing to an altitude of 16 feet, flying 436 feet south, and then maneuvering back to its original location in 120 seconds from takeoff to landing.

"We designed Ingenuity for a baseline mission, which was looking at five flights up to 90 seconds each," said Ben Pipenberg, engineering lead on the Mars Ingenuity Helicopter Program and AeroVironment senior aeromechanical engineer. "It's definitely overperformed from what we would have hoped to see and it's meeting all of our wildest expectations at this point."

Indeed, Ingenuity is performing so well that NASA has extended its mission officially to the "demonstration phase." That means its purpose is not merely ascertaining if it can fly or not — now, the little 'copter will start to make scientific contributions to the Perseverance mission.

"The Ingenuity technology demonstration has been a resounding success," said Thomas Zurbuchen, associate administrator for NASA's Science Mission Directorate, in a press statement. "Since Ingenuity remains in excellent health, we plan to use it to benefit future aerial platforms while prioritizing and moving forward with the Perseverance rover team's near-term science goals."

Once Ingenuity accomplishes its sixth flight — which will happen in the next few weeks — the next phase will begin. Then, Ingenuity will execute one-way flights, perform aerial observations, and capture stereo images for digital elevation maps.

While Ingenuity's success has managed to wow scientists, it's also come with quite a few lessons that extend beyond flying on Mars.

"In addition to needing to fly as a helicopter in a very thin atmosphere, Ingenuity has to be a pretty good spacecraft — just surviving launch to get to Mars, being deployed from the rover and then being able to survive by itself without any input from the rover, in terms of power, that has not an easy thing to design for," Pipenberg told Salon. "We've learned a lot during that process, just how to survive the rocket launch, how to make it operate very reliably, how to make it very lightweight but very strong, so there's a lot that we've been able to take away even in these four short little flights."

However, what Pipenberg is most surprised by is the lack of dust plumes when Ingenuity takes off and lands, which could be the reason it hasn't had any issues charging via its solar panel.

"We designed the helicopter to handle the dust, and we were pretty concerned that during takeoff and landing there could be this big dust plume that gets kicked up by the helicopter's rotors. There really isn't any evidence of that," Pipenberg said. "We were hoping that it wouldn't be an issue, but we really didn't know, nobody's ever done this before, and so the absence of that is pretty fortunate because it could potentially have had issues for the solar array."

Pipenberg said he's excited for Ingenuity's next phase because it will contribute to the science of the mission. But Ingenuity, Pipenberg said, will be "pushed a little bit more" in terms of the boundaries of the little helicopter's capabilities. After all, this next phase of the mission was never a guarantee, and is essentially a bonus for the Perseverance team.

Now it's time for Ingenuity to show that little four-pound copters might be regular additions to future Mars missions.

"I think that we'll be able to demonstrate over the next days and weeks that this kind of capability can really add a lot to a mission like Perseverance, and the application could be potentially usable for other missions," Pipenberg said. "A helicopter could potentially be used as a larger vehicle with more capable payloads, or it could be used as a scout, or as an observation platform for future manned missions to map out surrounding and gaining situational awareness for manned missions.