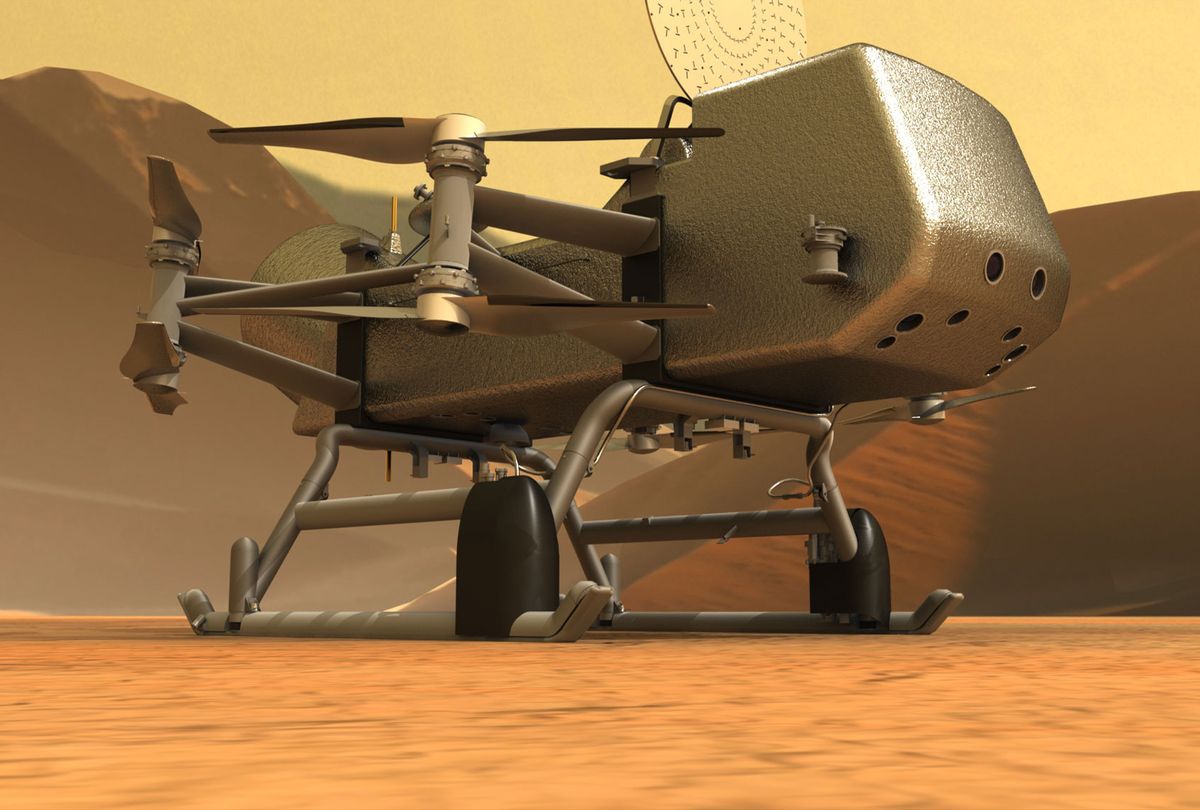 On Monday, The National Aeronautics and Space Administration (NASA) announced that Ingenuity succeeded in being the first powered-controlled flight on another planet. The space agency's Jet Propulsion Laboratory in southern California confirmed the news after scientists received data from the four-pound rotorcraft at 6:46 a.m. east coast time.

"Ingenuity is the latest in a long and storied tradition of NASA projects achieving a space exploration goal once thought impossible," said acting NASA Administrator Steve Jurczyk. "We don't know exactly where Ingenuity will lead us, but today's results indicate the sky – at least on Mars – may not be the limit."

As Salon previously reported, Ingenuity was designed as an experiment to see if it is possible to fly in Mars' thin atmosphere.

The historic moment, first powered flight on another world, will be succeeded this decade by an even more elaborate powered flight on a different world. Indeed, NASA is planning to put a vastly larger rotorcraft, named Dragonfly, on Saturn's large moon Titan in 2027.

Though both Dragonfly and Ingenuity are similar in the sense that they are both flying craft on other worlds, their construction couldn't be more different. From the way that they're powered to their sheer mass, comparing the two is like comparing an eagle to a gnat in terms of scale.

What is the Dragonfly mission?

In 2027, Dragonfly will launch from Earth and embark on what will be an eight-year journey to Titan, the second-largest moon in the solar system. As with Perseverance on Mars, the goal of this astrobiology mission is to advance our world's understanding of the "building blocks of life" and to look for signs of life on Titan, according to NASA.

Indeed, despite its far distance from the sun, Saturn's biggest moon has a lot of peculiar properties that make it a candidate for being habitable by life as we know it, either in the past or currently. Titan has clouds, rivers, lakes, and rain above its icy surface — though they are not made of water, but of hydrocarbons like ethane and methane. Titan is also the only moon in the solar system known to have a substantial atmosphere. Like Earth, it is mostly made up of nitrogen.

"Visiting this mysterious ocean world could revolutionize what we know about life in the universe," former NASA Administrator Jim Bridenstine said. "This cutting-edge mission would have been unthinkable even just a few years ago, but we're now ready for Dragonfly's amazing flight."

The entire mission will cost around $1 billion.

What is the Dragonfly rotorcraft?

Dragonfly is a dual-quadcopter — also known as an "octocopter," for its eight blades that help it hover — that is designed to explore multiple locations on Titan via flight. Each rotor will be configured to tolerate the loss of at least one rotor or motor. The lithium-battery powered rotorcraft will have the ability to travel up to 22 miles per hour and climb an altitude of about 13,000 feet. Every 16 Earth days (one Titan day), the rotorcraft will hop to its next location and stay charged by using its radioactive power source — a much more reliable and compact source of power than solar panels. Unlike Ingenuity, which was four pounds and is solar-powered, Dragonfly will be approximately 990 pounds in weight and packaged inside a 12-foot diameter heat shield.

It will also be a lot easier for Titan to take flight than it was for Ingenuity. Titan has a dense atmosphere, about four times the density of Earth's, and low gravity — making it easier to fly. Ingenuity was designed to succeed in Mars' thin atmosphere; flying is a much easier task on Titan.

Dragonfly is expected to land in the dunes at the edge of a region of Titan cheekily known as Shangri-La. The rotorcraft will take samples from areas with interesting geography and then it will travel to the Selk impact crater, where there is evidence of liquid water existing previously.

What will Dragonfly study?

Scientists believe that Titan is similar to a very early Earth. Hence it might be able to provide us with clues as to how life got its start on Earth. Specifically, scientists hope to measure the composition of solid hydrocarbon materials on Titan's surface, which could reveal how probiotic chemistry has advanced in environments that have key known ingredients for life.

Will it still set records on flight?

Yes. Ingenuity is now the first powered-controlled flight to occur to another planet. And if Dragonfly succeeds, it will be the second rotorcraft to fly on a celestial body other than Earth. Cameras on the rotorcraft will also stream images during flight, giving people on Earth a a view of the Saturn moon. And of course, at nearly half a ton, it will set a record for the heaviest powered-controlled craft flown on another planet.

How long will this take?

Dragonfly will be hopping around Titan for at least two and a half years.