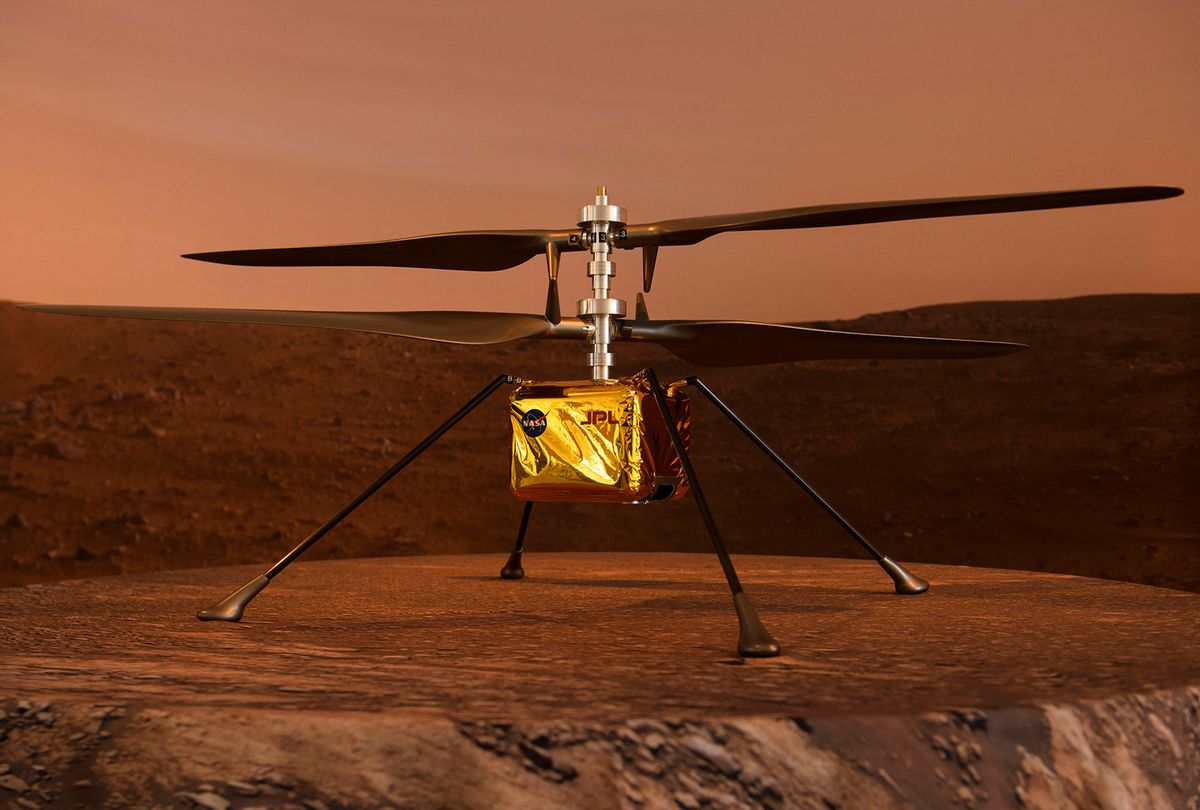 A full scale model of the experimental Ingenuity Mars Helicopter, which will be carried under the Mars 2020 Perseverance rover, is displayed at NASA's Jet Propulsion Laboratory (JPL) on February 16, 2021 in Pasadena, California. - The Mars exploration rover will search for signs of ancient microbial life and collect rock samples for future return to Earth to study the red planet's geology and climate, paving the way for human exploration. Perseverance also carries the experimental Ingenuity Mars Helicopter - which will attempt the first powered, controlled flight on another planet. (PATRICK T. FALLON/AFP via Getty Images)
--

More than 117 years ago, Orville and Wilbur Wright made the first successful flight of a powered, controlled aircraft. Now humanity has achieved another flight milestone, albeit on another planet. For the first time ever, human beings have built an aircraft that was able to perform a controlled and powered flight on another world.

Although guided by computer rather than a human, NASA's Ingenuity Mars Helicopter nevertheless made history shortly after half past three in the morning East Coast time. The solar-powered helicopter, which was transported to Mars as part of NASA's Mars 2020 mission, managed to become airborne for just shy of 40 seconds — 28 seconds longer than the Wright brothers' first flight. Ingenuity lifted off, hovered at a stable rate for roughly 30 seconds — its maximum altitude was 10 feet — and then safely touched back down on the planet's surface.

NASA's Jet Propulsion Laboratory in Southern California had to confirm all of this after it had happened — or more specifically, after their scientists received data from the helicopter — because its flight could not be observed in real time due to the limitations of the speed of light. The flight itself was actually controlled by an on-board computer with algorithms designed by the Jet Propulsion Laboratory's team.

To commemorate the historic nature of the achievement, NASA Associate Administrator for Science Thomas Zurbuchen announced that the airfield would be named after Orville and Wilbur Wright. (The helicopter, notably, contains a small piece of the fabric used to cover one of the wings of the Wright brothers' pioneering aircraft.)

"Ingenuity is the latest in a long and storied tradition of NASA projects achieving a space exploration goal once thought impossible," Acting NASA Administrator Steve Jurczyk explained in a statement. "The X-15 was a pathfinder for the space shuttle. Mars Pathfinder and its Sojourner rover did the same for three generations of Mars rovers. We don't know exactly where Ingenuity will lead us, but today's results indicate the sky – at least on Mars – may not be the limit."

Getting the helicopter to the point where it could fly on Mars was not as easy as simply guaranteeing that  the aircraft made it to the planet's surface intact. NASA scientists had to precisely position their machine in a location where there would not be any obstructions, which they did by placing it in a 33-by-33 foot square airfield. It took them several sols (the term for a Martian day, which is 39 minutes longer than an Earth day) to slowly disconnect the helicopter from the vehicles that brought it to the red planet, move it into the correct position and make sure its solar-paneled batteries were sufficiently charged.

One of the main purposes of the NASA rover Perseverance's mission is to find whether life does, or at least used to, exist on Mars. Over the course of its multi-year mission, the Perseverance rover will study the Martian surface, drill into rock, and collect some samples of soil for a future sample-return mission.