Republicans find the perfect woman to take down Liz Cheney

Rep. Elise Stefanik is a shameless political shapeshifter — making her the perfect person to push fealty to Trump 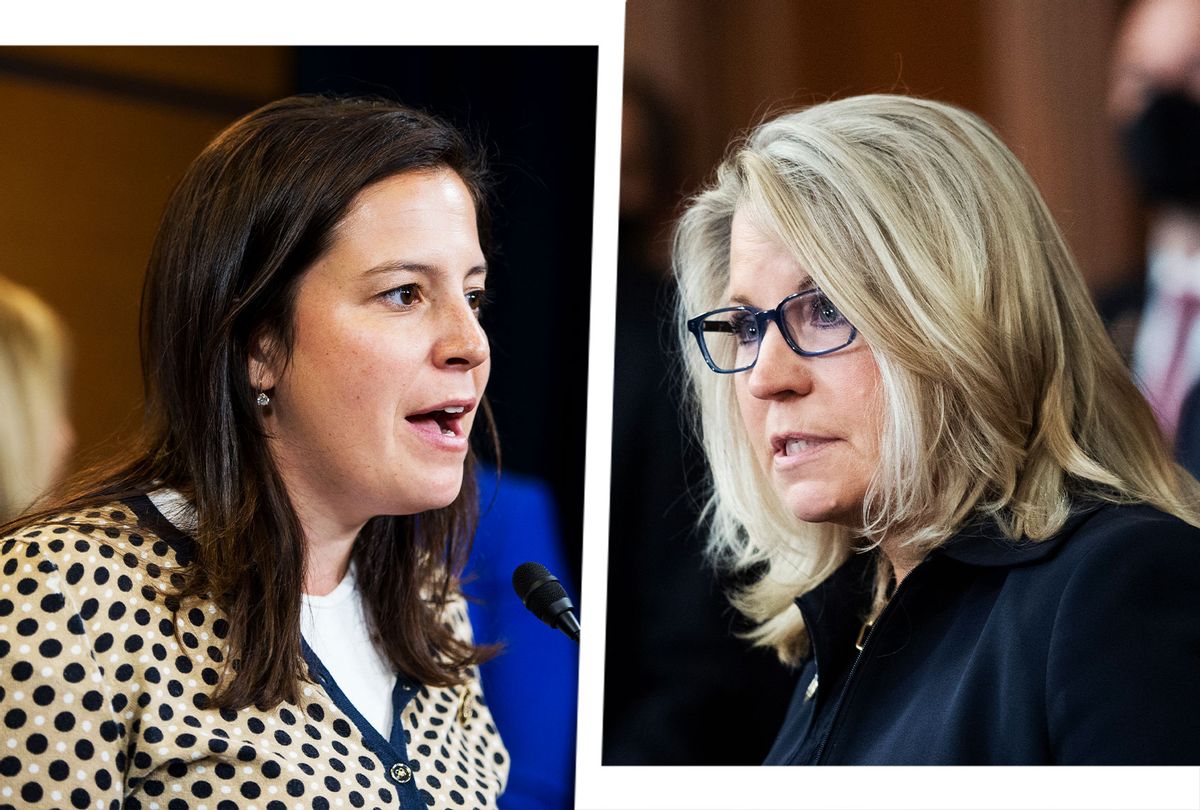 I had never heard of congresswoman Elise Stefanik, R-NY, until the House of Representatives hearings for Trump's first impeachment. She stormed into the national consciousness by repeatedly whining that Intelligence Committee Chairman Adam Schiff was refusing to let her speak and became an overnight sensation. (He was not — she just used the opportunity to rant about how unfair the process was, instantly endearing herself to Republicans all over the country.) Donald Trump was so impressed with her obnoxious behavior that he tweeted: "A new Republican star is born!"

And her star has been rising ever since.

But as it happens, Stefanik was a woman in a hurry long before her breakout role as a pugnacious Donald Trump defender. Prior to volunteering as a Trump henchwoman, she had been seen as a moderate from New York, someone who with reservations about his leadership. She had the perfect GOP establishment resume, having attended Harvard, worked on staff in the Bush White House, on Mitt Romney's presidential campaign and participated in such projects as the 2014 Republican "autopsy" which had recommended that the Party moderate and work to appeal to women, and racial and ethnic minorities. She was considered on the moderate side of the dial although she partnered with Congresswoman Liz Cheney at one point on a bill to halt the withdrawal of troops from Afghanistan which put her firmly in the right-wing hawk camp. She's always had her bases covered.

But according to NPR reporter Brian Mann, who covered her since she first ran for congress in 2014, despite the stellar DC resume, Stefanik downplayed her credentials. Her pitch to the voters in her first race in 2014 was that she grew up in a small town in the district but it turned out that nobody there knew who she was. She was an excellent campaigner, however, who won her seat handily, and in the process making it clear to all the powers that be in the party that she was seriously pursuing a national profile.

2016 was a setback with the election of Donald Trump and she carefully calibrated her message to criticize while not making enemies. She sold herself as a "maverick" from a district that had long elected moderates but had voted for Trump by double digits. She voted against the Trump tax cuts, backed equal rights for LGBT citizens and supported the DREAM act. But in Trump's GOP she was going nowhere with that agenda.

So she switched gears and by the time the first impeachment came around she had become an enthusiastic Trump sycophant, a junior member of the exclusive club of important Trump henchmen like Jim Jordan, Mark Meadows and Devin Nunes. She found a way to leverage her "bipartisan" record as a selling point by fatuously proclaiming that her support for Trump was particularly credible because it came out of her fealty to the Constitution, which is as Trumpy as it gets. By the time 2020 rolled around, she was one of the most vociferous purveyors of the Big Lie, even when some of the others were tiptoeing around the subject. As Mann put it on Twitter:

"Throughout the process [Stefanik] showed steady ambition, an ability to adapt and evolve her politics, and a willingness to shed old loyalties and allies while amplifying factual untruths when necessary. Her brand may be a perfect match for the modern GOP"

It's clear that she is a shameless political shapeshifter. But it turns out that her real talent is demagoguery and flamboyant outrage which, again, makes her the perfect woman for the moment.

During Trump's first impeachment trial, after her star turn on the Intelligence Committee, she was chosen to be on Trump's team of defenders (as opposed to his defense team) along with Rep. Jim Jordan of Ohio, Rep. Lee Zeldin of New York and Rep. Mark Meadows of North Carolina. They would gather in the basement of the Capitol every day with members of the press eager to hear their latest broadsides against the Democrats and "the process." They were obviously working hand in glove with the White House and the defense team to spin the trial although they insisted they weren't.

The 2020 election found Stefanik in loony Trump lawyers Sidney Powell and Lin Wood territory when it came to The Big Lie. There were lots of Republicans hemming and hawing, trying to walk the line between Trump's petulant refusal to accept his loss and the reality that they had to move on. But Stefanik was all in, even going so far as to issue a statement explaining her decision to vote against certifying the election on the morning of the January 6th Insurrection, in which she lied blatantly about the vote count in Georgia:

This week she went on former Trump adviser Steve Bannon's podcast and enthusiastically backed the asinine Arizona recount in which an outside group is currently examining ballots for signs of bamboo in the paper in order to prove that they were part of a ballot-stuffing scheme sponsored by China.

It was a short trip from maverick, bipartisan, modern Republican to flagrant Trumpian liar in just a few years. Of course, she isn't alone. Freedom Caucus members like Mark Meadows and Jim Jordan used to pretend to care about "fiscal responsibility" until Trump came along and made GOP politics solely about media attention, owning libs, and fighting the culture wars. (That's what it had been for a very long time but Trump freed them from having to pretend otherwise.)

So now Stefanik is poised to join the leadership of the party by taking the place of Liz Cheney, the party's human sacrifice to their angry god, Donald Trump. Both House Minority Leader Kevin McCarthy and his deputy Steve Scalise of Louisiana have thrown their support behind Stefanik and Trump released a statement on Wednesday giving her his "COMPLETE and TOTAL Endorsement," calling her a "tough and smart communicator" so she's pretty much a shoo-in.

There are some distant rumblings from the ragged remnants of the right-wing conservative movement, like Ann Coulter and The Club for Growth, because of her record of squishiness on issues they care about such as immigration and tax cuts. In fact, her voting record is far more moderate than Cheney's.

But that's not really relevant, is it?

The Republican party is no longer concerned with old-fashioned notions like "issues." This is about fealty to the Big Lie and The Big Liar to be sure. But it's really about maintaining power for its own sake, by any means necessary. Elise Stefanik is a woman who instinctively understands that and has proven over and over again in her short career that she is willing to do whatever it takes.