What a 78,000-year-old child buried in a Kenyan cave tells us about ancient humans

"They would have grieved for the child who they placed there," one researcher says of the 78,000-year-old grave 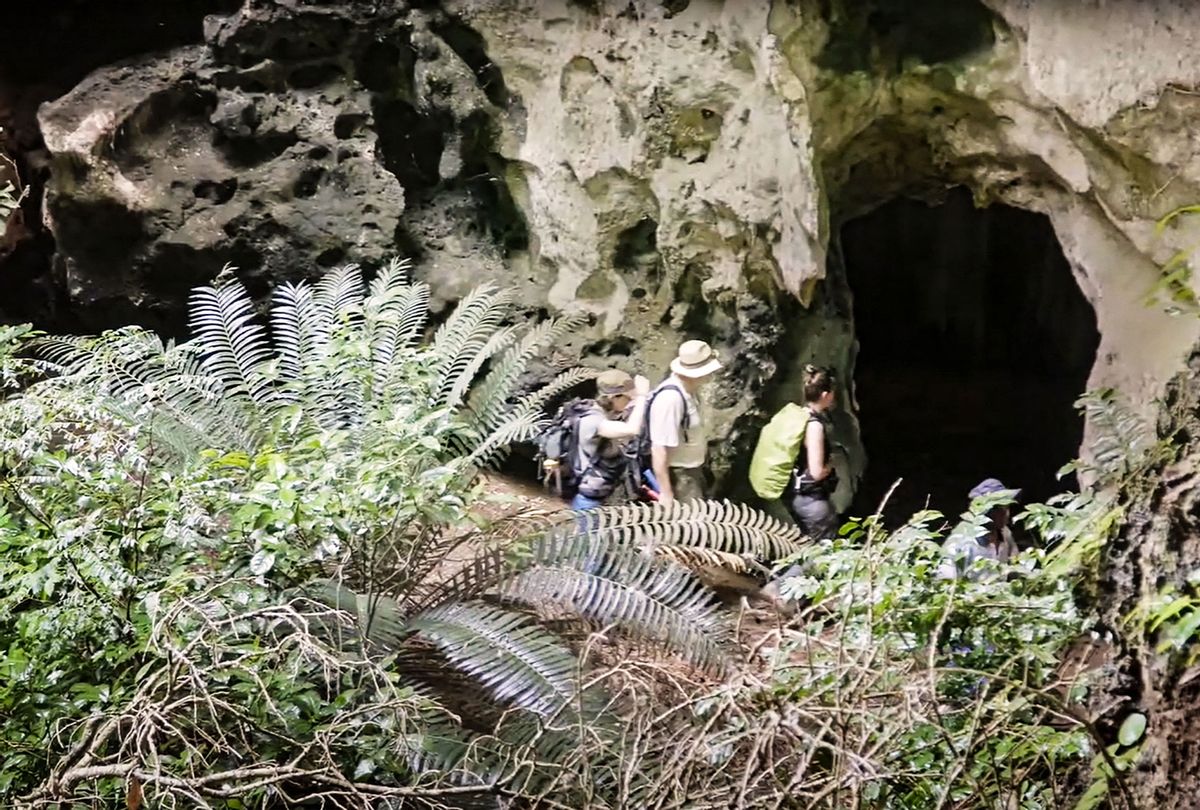 This handout picture released on May 4, 2021 by the CNRS-University of Bordeaux, shows archaelogists at the Panga Ya Saidi site, north of Mombasa, Kenya, where the remains of a 3-year-old child named by the scientists "Mtoto" (meaning 'child' in Swahili) and buried inside a deliberately dug pit, were discovered. (FRANCESCO DERRICO,ALAIN QUEFFELEC/UNIVERSITY OF BORDEAUX/AFP via Getty Images)
--

A grieving family in Africa had just lost a young child, between two and three years old. Devastated, they laid the corpse in the fetal position and gently rested the child's head on a cushion of leaves. His body was tightly wrapped up and lovingly stored in a Kenyan cave.

Most remarkable of all is that this happened 78,000 years ago — 73,000 years before the invention of writing and the beginning of recorded history.

To put that time span in further perspective, what we know for sure about human beings before the Stone Age — which ended four to six millennia ago — is rocky at best. Archaeologists are regularly stunned at the sophistication of our ancient ancestors, and remain eager to learn more about them.

Now, a group of researchers have published an article in the journal "Nature" that gives a glimpse into how a family endured one of its worst moments long before Socrates or Christ. They discovered Middle Stone Age remains of a little boy, whom they dubbed Mtoto (Swahili for "the kid"). Mtoto's parents reacted to his death in a manner not dissimilar from what most people do today.

From a historical perspective, this discovery is a very big deal.

"The interment at Panga ya Saidi is the oldest burial of Homo sapiens in Africa," professor Michael Petraglia of the Max Planck Institute for the Science of Human History, who co-authored the paper, told Salon by email. "The evidence supports the view that people living at the site were fully behaviorally, socially and cognitively modern."

Petraglia noted that this constituted the oldest known burial in Africa, though not in the world. Indeed, there were Homo sapiens and Neanderthals burying their dead in caves along Israel's Mount Carmel roughly 120,000 years ago.

"The people that lived at the site were mobile hunter-gatherers, who subsisted on wild game," Petraglia explained. "The stone tools indicate that a variety of domestic tasks occurred on site, and tools such as points indicate that spears were likely used to kill game at a distance."

Most of the world has moved beyond this type of lifestyle. Sometimes, when our lives are molded by technology, we wonder if those who lived before written history were like us in any meaningful ways. If nothing else, our ancestors also seemed to very deeply love their children.

"The group buried Mtoto with great care," Petraglia told Salon. "The grave was excavated and the body was carefully placed in the pit. We believe that the body was wrapped in a shroud and a head rest, or pillow, was placed under the head. Members of the group, and probably the family, were involved in the burial. Surely they would have grieved for the child who they placed there."

The study noted that fewer mortuary practices had been discovered in Africa from this period than had been found in other parts of the world, with the previous earliest known possible burials on the continent being traced to South Africa's Border Cave and Egypt's Taramsa. The international team of archaeologists have therefore complicated our current understanding of ancient Africa. Because it is widely regarded as the cradle of civilization, it was unusual that early mortuary practices had not been found there.

Behind the scholarly analysis and historical contextualization, the grave is also a relatable tale of loss.

"In stepping away from the scientific evidence and data, one certainly felt a kinship," Petraglia explained. "After all, here was an act that seemed very familiar. And, to think that a young three year old child died in the very place that the group was likely residing, struck me as a very sad moment in time for the family — 78,000 years ago."