Republicans are cementing their new strategy: Pander to the Trump base, then cheat and steal your way to power 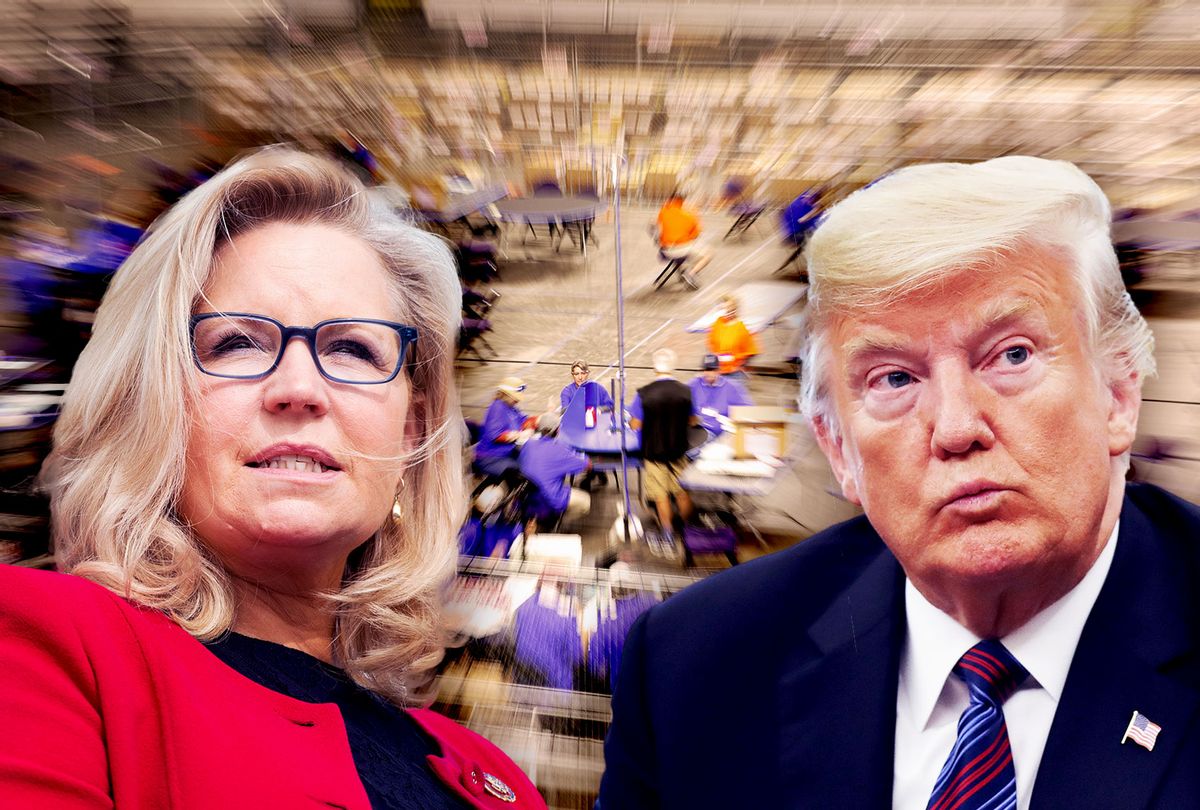 It's increasingly certain that Rep. Liz Cheney, R-Wyo., is going to get the big ol' boot from her leadership positions in the House by a Republican caucus increasingly furious with her for refusing to cosign to Donald Trump's Big Lie, that he is the "real" winner of the election and that the insurrection was a good thing. No one should cry for Cheney, who is sleeping in a bed she carefully made for herself, but the whole situation is nonetheless extremely concerning. It's a sign that Republicans are going on all-in on Trump and the Big Lie, to the point where anyone who even shows signs of even feeling pangs of dissent is being subject to vicious smears and other tactics to bring them into line. To add to the concerns for democracy, the unspooling fake "audit" of votes in Arizona is continuing to feed a steady stream of pro-insurrection propaganda to the GOP base, continuing to reinforce the idea that they're entitled to steal elections because imaginary Democrats in outlandish conspiracy theories did it first.

But it's not just liberals who are worried for our democracy who are expressing concerns.

According to Allan Smith and Sahil Kapur of NBC News, many Republican political strategists are worried, too, because they see these pro-insurrection antics as alienating to some segments of voters.

"Removing Liz Cheney from leadership will give a boatload of ammunition to the GOP's critics," Whit Ayres, a Republican pollster, told NBC News. Ayers' worry, Smith and Kapur wrote, is that such actions "could further antagonize suburban voters, particularly college-educated women, who ditched the party because of their opposition to Trump."

Similarly, some Republicans in Arizona are having second thoughts about the clown show that is the Maricopa County vote "audit" being conducted to please Trump and bolster right-wing conspiracy theories.

"It makes us look like idiots," Republican state Sen. Paul Boyer, who represents the kind of suburban district Ayres is afraid of losing, told the New York Times. "Looking back, I didn't think it would be this ridiculous. It's embarrassing to be a state senator at this point."

Trump and the Big Lie are both, to be clear, quite popular with the GOP base. Polling shows that 70% of Republican voters still refuse to accept that Joe Biden won the 2020 election and the majority of Republican voters cling to one kind of conspiracy theory or another to justify the insurrection Trump incited on January 6.

But there's good reason to believe those voters could be persuaded to move on to some other shiny object of white grievance, if the leadership just quietly cut Trump loose to rave by himself on his fake "social media" site. These folks are addicted to grievance more than they are to Trump, and if Republicans just gave them something else to focus on — Disneyland getting rid of rape jokes or the term "birthing people" are some recent Fox News-generated contenders — they would move on surprisingly quickly.

So it's the roughly quarter of Republicans who admit Biden won the election that Republican strategists are worried about. And those are just the ones who still admit they are Republican. As post-election analysis shows, in addition to suburban women, independent voters and even some male voters are getting fed up with the Trump circus. For those people, the insurrection was another inflection point proving Trump has gone too far. Republicans increasingly siding with the insurrection yahoos over ordinary Americans is not going to improve their standing with such voters.

So why are House Minority Leader Kevin McCarthy, R-Calif., and the rest of GOP leadership going along with a plan to fully rebrand themselves as the party of wild-eyed conspiracy theorists?

It's not just fear of Tucker Carlson making gay jokes. It's that the GOP's strategy for "winning" elections is no longer the traditional democratic one of trying to attract and retain voters. Instead, the focus is shifting, quite rapidly, to making sure that Republicans "win" even when they lose. Voter suppression gets the lion's share of the attention, but as Heather "Digby" Parton noted at Salon on Monday, outright theft is now on the table for most Republicans.

"Trump made a serious run at getting the election overturned," she writes, noting that he was stopped, in part, because "local officials and judges around the country refused to cooperate." But now those folks are getting purged and Cheney is merely the most prominent example. As Parton notes, Republican leadership has set aside "misgivings" about openly trying to steal elections and next time it happens, they're fully on board.

Law professor Joshua A. Douglas concurs in a piece in the Washington Post, noting that a combination of harassment and new laws that make it easier to threaten election officials with prison are being leveraged to squeeze out those who still defend the integrity of elections on a local and state level. Next time Trump — or other Republicans running for any office — makes a run at stealing an election, they'll find a whole new cast of officials who think illegally throwing out votes or otherwise helping a fascist insurrectionist is very much to their liking.

That's why Republicans are way more focused on serving the MAGA faithful than they are serving more moderate voters who think democracy is a good thing. As the Capitol riot showed, while the red hats are a minority of Americans, they are one that's prepared to use whatever means necessary — including violence — to force their will on the rest of the country. That's a bad thing for democracy, but, as Trump believed, a good thing to have on your side if your desire is to take power by force instead of winning elections.

Which isn't to say things are hopeless.

What Republicans forget about Trump's coup is that it didn't just fail because Trump hit a firewall of election officials who still had integrity. It failed because progressives saw the coup coming, took it seriously, and fought back. After witnessing a mob literally storm the Capitol, even more moderates and liberals are ready to admit that we're in danger of a fascist takeover and will step up again to stop it.

The bad news, however, is pro-democracy forces are not finding the support they need in the Democratic Party. To be certain, both President Biden and the majority of congressional Democrats whole-heartedly support bills that would reform our electoral systems to shield them against the kinds of theft Republicans are gearing up to perform. Unfortunately, those Democrats are still stymied by a couple of blinkered, obstructionist Democrats in the Senate — namely, Joe Manchin of West Virginia and Kyrsten Sinema of Arizona — who would rather keep the filibuster in place than pass bills necessary to keep Republicans from outright stealing elections. Without that support, even the best efforts of ordinary progressives on the ground to save our democracy could very likely fail next time.