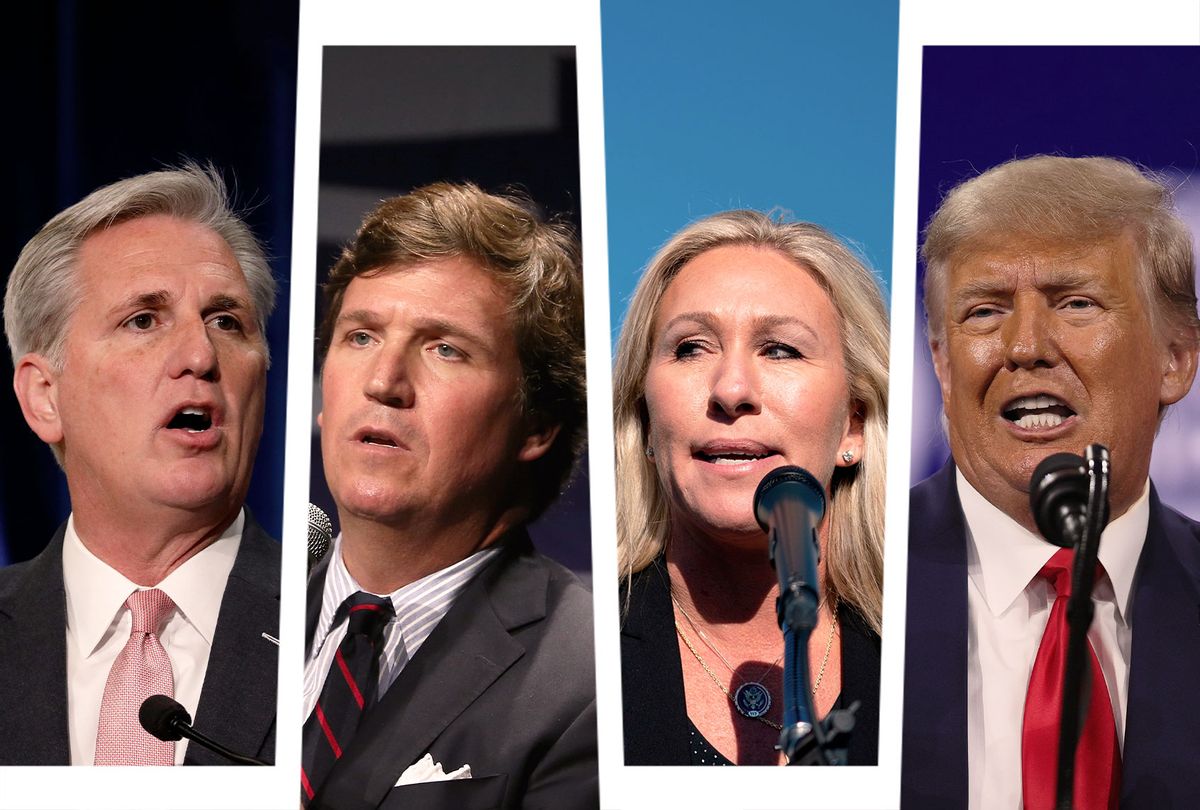 That Minority Leader Kevin McCarthy, R-Calif., is a wimp is not news.

After Donald Trump incited an insurrection on Jan. 6, McCarthy reportedly phoned Trump and begged him to call off his QAnon-drunk dogs, only to get the reply, "Well, Kevin, I guess these people are more upset about the election than you are." McCarthy had done everything in his power to show fealty to Trump — and to Trump's attempted coup —by publicly supporting Trump's "right" to overturn the election and voting against certifying the electoral win of Joe Biden. But that wasn't good enough for Trump, who continues to clearly believe there was One Simple Trick© Republicans could have pulled out of a bag to overrule the legal election results. Rather than tell that bitter old wannabe dictator where to shove it, McCarthy has instead spent the past few months publicly licking Trump's boots. He even, at the end of April, pretended that his call with Trump had been about Trump wanting to end the Capitol riot when it was quite clearly the opposite.

And yet, McCarthy theatrically submitting to Trump has not been enough to placate the insurrectionist wing of the GOP, who continue to be suspicious that McCarthy harbors doubts in his heart about the wisdom of having a President-for-Life Trump. The new demand is that McCarthy defenestrates Rep. Liz Cheney, R-Wyo., for the sin of continuing to insist that the insurrection really happened.

The main tactic to bring McCarthy into line? Schoolyard taunts that are, frankly, beneath the average middle schooler.

And the admittedly darkly funny part of this is that it's working. McCarthy, like a substitute teacher who has lost control of a 7th-grade classroom, is caving to some truly childish bullying from the likes of Tucker "Dan White Society" Carlson.

On his Fox News show Monday evening, Carlson trashed McCarthy for renting a room from GOP pollster Frank Luntz. Carlson's excuse for doing an entire segment on McCarthy's living arrangements was that the "relationship gives Luntz outsized influence over the Republican Party's policy positions," suggesting that Luntz works for "left-wing corporations." The two men "are not simply friends; they're roommates," Carlson raved, in his usual tones of feigned outrage and surprise.

Even by Carlson's famously shoddy standards, the segment was ridiculous.

Luntz is a longtime fixture on Capitol Hill, but is not exactly a famous person and certainly not someone that the average Fox News viewer likely cares about one way or another. And while Luntz has done some admirable work trying to find ways to win Trump voters over to being vaccinated against COVID-19, it's beyond a stretch to paint him as "left-wing." Luntz is the architect of some of the most noxious right-wing communications strategies in history, winning the 2010 Politifact Lie of the Year, an award for framing the Affordable Care Act as a "government takeover of health care."

But let's face it: Carlson isn't really concerned about Luntz's "influence" over McCarthy. He did this segment with the full knowledge that most Fox viewers are unaware that it's common for members of Congres to rent rooms from friends in D.C., since most members maintain their full-time residence in their home district. As the Washington Post reported, Luntz's house is actually four adjoining penthouse apartments that add up to 7,000 square feet, suggesting that McCarthy's "room" is actually more like a full apartment with "access to a 24/7 concierge, a rooftop pool, a fitness center, a media room, a business center, and a party room with a bar and pool table."

Carlson slid by all of that, likely because this was an excuse to get the word "roommates" — which continues to be a popular euphemism in many of the red areas where Carlson's show is popular — attached to McCarthy's name on-air.

The strategy appears to have worked swiftly. Carlson was calling McCarthy a "roommate" Monday night and by Tuesday morning, McCarthy "accidentally" let slip into a hot mic during a Fox News interview that he thinks Cheney has "got real problems" and that he's "lost confidence" in her. Now the GOP caucus is moving to oust Cheney from her leadership positions and replace her with Rep. Elise Stefanik, R-N.Y., who has been a staunch supporter of Trump's attempted coup, even going so far as to sign onto a Texas lawsuit demanding that swing states that voted for Biden have their votes thrown out.

Despite this victory over McCarthy, however, Carlson upped the ante Wednesday when he hosted Rep. Marjorie Taylor Greene, R-Ga., on his paywall-only show on Fox Nation, the channel for people who feel unfulfilled with a mere 24 hours a day of right-wing propaganda. Bringing Taylor Greene on, of course, was Carlson signaling support for the insurrectionist wing, of which Taylor Greene is the most visible member. Taylor Greene then proceeded to bash the majority of Congress as "not qualified to be there," because they supposedly don't have the chops of Taylor Greene, a woman who inherited her construction empire from her daddy.

The audience for Fox Nation is one that wants to dispense with the winking and nudging and get straight to the red meat and, as Jake Lahut of Business Insider reports, Carlson and Taylor Greene did not disappoint:

Tucker: Were you shocked to learn they share a toothbrush or are roommates or whatever?

Tucker: Do we have any clarity on that?

Greene: Somebody should find out, right?

These kinds of tactics really expose what the GOP is about in the post-Trump era, emulating Trump's own schoolyard bully instincts for getting his way. And frankly, it's because Trump showed it worked. For five years he was able to bring to heel the vast majority of the GOP caucus through childish tactics.

Wednesday night, Chris Hayes of MSNBC called McCarthy out for subjugating himself to these kinds of tactics, arguing that the cost of power in the Trump-controlled Republican Party "is to humiliate yourself as much as humanly possible."

McCarthy is clearly caving in to the demands for the ritual sacrifice of Cheney, so what more do the insurrectionist-friendly Republicans want?

According to CNN's Jamie Gangel, Republicans are still worried about the possibility that there will be a congressional commission on the Jan. 6 insurrection. This is something they dearly wish to avoid because it interferes with Trump's mission to create another Big Lie, which is that the insurrection didn't really happen and was more like a fun picnic. Gangel reports that McCarthy is "very concerned" that he would be called on to testify under oath, not just about his Jan. 6 call to Trump, but about all his communications with Trump as Trump pushed his coup-justifying lie that the election was "stolen."

"He does not want to do that," Gangel said of McCarthy.

And now we have Carlson and other utter sleazes like Taylor Greene on hand to remind McCarthy that the price of disloyalty to Trump — and especially of telling the truth about Trump's attempted coup — is being subject to this kind of rumor-mongering through popular right-wing channels.

It's tempting to laugh the whole thing off because McCarthy isn't just a wimp, but a hard-right ideologue who deserves every bad thing that Trump and his minions can dish out. Unfortunately, this campaign of humiliation against McCarthy is serving a larger purpose: Propping up lies that are meant to undermine and eventually collapse our democracy.

Tucker Carlson and Marjorie Taylor Greene are trying to scare anyone in the GOP who is even suspected of still having remnants of conscience into falling in line with Trump's Big Lies: That the election was stolen and that the insurrection didn't happen. It's about paving the way for Trump to regain the White House, this time with the anti-democratic machinery shored up so that he doesn't have to accept it the next time he loses an election. So while McCarthy isn't a sympathetic figure in the slightest, that this is working on him should terrify us all.