The GOP-dominated SCOTUS longs to end the Voting Rights Act. Democrats can save it by nuking the filibuster 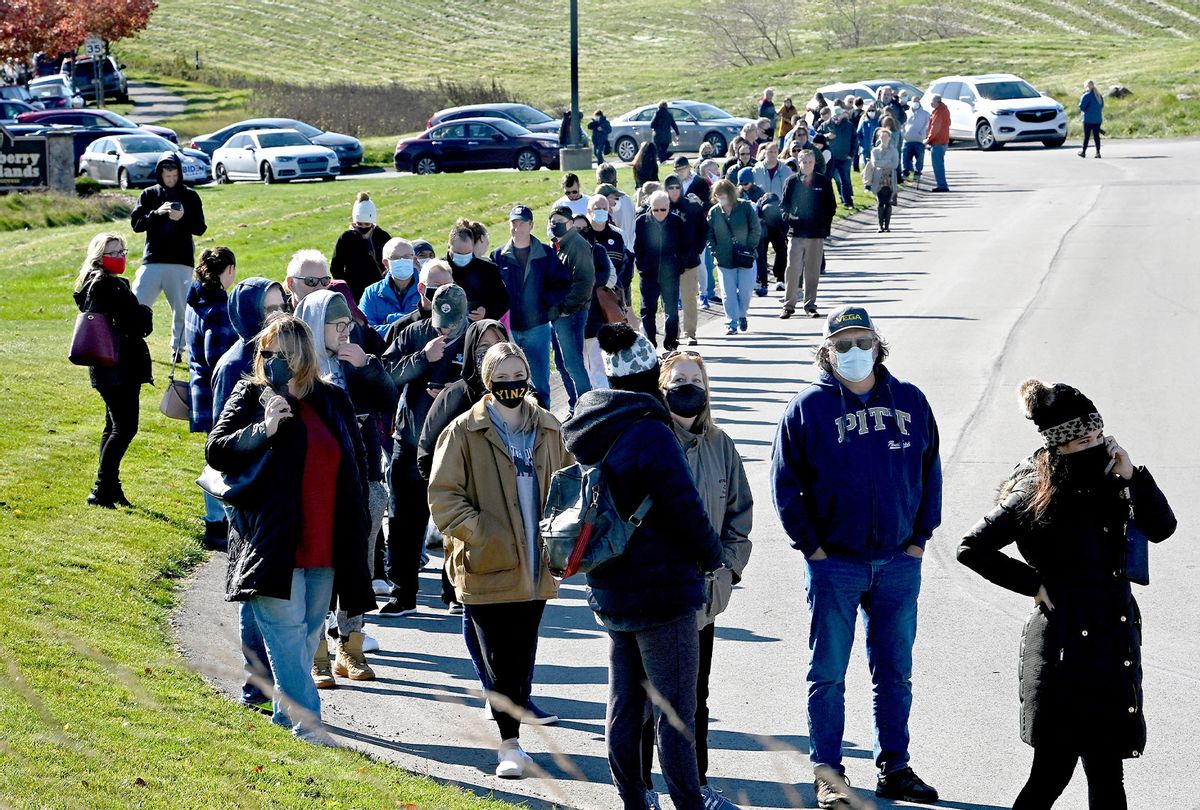 Hundreds of voters lined up early in Cranberry, Pennsylvania at the Cranberry Highlands Golf Course on November 03, 2020. Many did not trust early voting (especially fears of mail delays) and opted to vote on election day in person. The average wait time here was two hours. (Michael S. Williamson/The Washington Post via Getty Images)
--

With the news cycle as nuts as it is — the constant pandemic news, the ongoing fallout from the Capitol insurrection, conservatives pretending to believe Dr. Seuss was "canceled" — it likely passed many people's attention that the Supreme Court listened to arguments Tuesday that may signal the end of voting rights as we know them.

On the surface, Brnovich v. Democratic National Committee and Arizona Republican Party v. Democratic National Committee may not seem like a big deal. The cases address partisan fights over rules in Arizona disallowing third party ballot collection and requiring ballots cast in the wrong precinct to be thrown out entirely, regulations that don't seem, on their surface, like earth-shattering assaults on the ability of most voters to cast ballots. But voting rights experts fear that the particulars of the Arizona restrictions are not really what's at stake in the case, which is likely to be ruled on this summer.

Instead, the concern is that the Republican-majority Supreme Court is going to use these cases to issue a broad ruling that will be used to destroy what is left of the Voting Rights Act of 1965, opening the door to a flood of voting restrictions targeting the ability of certain classes of people — such as young people and people of color — to vote. If that happens, it could further entrench minority rule over the U.S., making it nearly impossible for Democrats to hold substantial power, despite routinely winning the majority of votes in federal elections.

The good news is that Democrats, at this moment, have the power to stop this from happening, by passing the For the People Act, otherwise known as H.R. 1.

But in order to do that, they need to — say it with me now! — nuke the filibuster, or Republicans in the Senate will be able to block the bill from ever even coming to a vote. Unfortunately, more conservative Democrats, especially Sens. Joe Manchin of West Virginia and Kyrsten Sinema of Arizona, have signaled that they intend to keep the filibuster in place, even as it's being used to usher in what voting rights activists have deemed the "new Jim Crow."

To understand the situation, it helps to note that the conservative justices of the Supreme Court and GOP efforts at suppressing the vote are working in concert. As Ian Millhiser at Vox explains, "The Supreme Court doesn't just have a 6-3 Republican majority; it's a majority that includes several justices who've shown a great deal of hostility toward voting rights generally and the Voting Rights Act in particular." Chief Justice John Roberts, in particular, has a long history of hatred for this law, which was passed to end Jim Crow restrictions on Black voters in 1965.

In 43 states, Republicans in state legislatures have introduced at least 253 bills intended to block eligible voters from the polls. Many of these have a good chance of passing, such as the Georgia bill that is clearly meant to target the rights of the Atlanta-area voters, especially Black voters, who helped win the state for Joe Biden in November and Democratic Sens. Jon Ossoff and Raphael Warnock in January.

This onslaught of bills has largely been attributed to Republican anger over Donald Trump's loss and to his avalanche of lies about "voter fraud" used to justify his false claims to be the "real" winner of the election. And that is true, but it's also the case that state Republicans are well aware not just of the Supreme Court's interest in obliterating the Voting Rights Act, but the urgency to push through any clampdowns this year. And so they are queueing up a series of voting restrictions, many of which would not pass muster with the Voting Rights Act still in place.

"It's hard to be optimistic about the Voting Rights Act with this court that already gutted the Voting Rights Act," journalist Ari Berman explained to Joy Reid on MSNBC Tuesday night. He was referring to a previous case, Shelby County vs. Holder, which struck down a critical provision in the Voting Rights Act and opened the door to the previous flood of often unsubtly racist voting restrictions. If more of the law is eliminated, the situation will get much worse. Unfortunately, Tuesday's arguments before the court Tuesday did not foretell a good outcome. The conservative judges, especially Roberts, kept asking leading questions that showcased a skepticism of the very idea that the government should not be in the business of making it harder for people to vote.

The collapse of voting rights was a multi-decade project on the right. It took years of pipelining judges opposed to civil rights through organizations like the Federalist Society and Republicans manipulating the nomination and confirmation process in order to pack the courts with these judges. Once the courts were taken over, then the bill started passing, helping secure more minority power for Republicans and more control over who gets on the courts. This latest round could be fatal to the ability of Democrats to win national elections, no matter how many more Americans prefer them.

But passing the For the People Act would stop this multi-decade Republican effort to gut democracy in its tracks. As Jon Schwarz at the Intercept writes, "The bill makes illegal essentially all of the anti-enfranchisement tactics perfected by the right over the past decades. It then creates a new infrastructure to permanently bolster the influence of regular people."

This reality makes the unwillingness of Sinema and Manchin to support ending the filibuster to pass the For the People Act incomprehensible.

Sinema, in particular, would benefit from this bill. It is literally her voting base that is being targeted for elimination with these Jim Crow-style laws in Arizona. Her re-election could very well depend on ending the filibuster and making sure her own voters are protected. Sinema only won in 2018 by 55,900 votes over her Republican opponent, Martha McSally. Without the For the People Act, Republicans can easily kick that many Democratic voters out of the polls by the time she's up for re-election in 2024, artificially rigging the election for whatever Republican she faces.

Nothing is more important right now than securing voting rights. The economy, the pandemic, even climate change are all life-altering issues, but without voting rights, the ability to protect public health, fix the economy, and fix the environment are all imperiled. Ending the filibuster is the right thing to do anyway — it's ridiculous to let a losing minority have veto rights over all legislation — but it is doubly important now. The question of whether the United States will even be a democracy by the year 2024 hangs in the balance.

Democrats aren't just failing themselves if they don't end the filibuster, they are failing democracy itself.