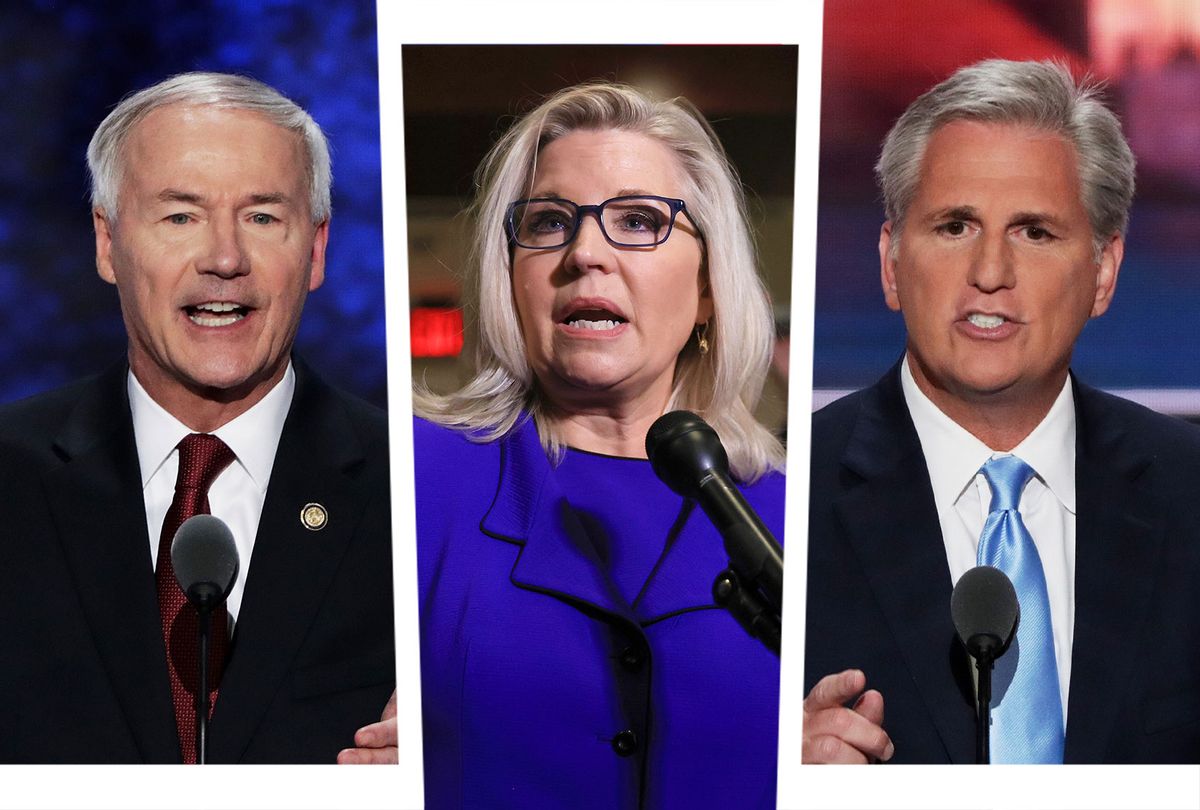 With the GOP now having stripped Rep. Liz Cheney, R-Wyo., from her leadership role as the party's conference chair, a growing number of Republicans are coming out of the woodworks to disavow their own party.

Over 100 Republicans are expected to pen a missive on Thursday, headlined "A Call For American Renewal," demanding the formation of a breakaway conservative party if the existing GOP does not immediately sever ties with former President Donald Trump, Reuters first reported. "The Republican Party is broken. It's time for a resistance of the 'rationals' against the 'radicals,'" said Miles Taylor, the formerly anonymous Trump staffer who wrote a 2018 New York Times op-ed detailing the internal resistance that was supposedly mounting against Trump at the time.

Among the signatories of the anti-Trump letter are various Republican members of Congress, ambassadors, governors, and former politicians vying for a return to a so-called "principled" Republican Party that rejects divisive rhetoric and conspiracy theories in public discourse.

"This is us saying that a group of more than 100 prominent Republicans think that the situation has gotten so dire with the Republican Party that it is now time to seriously consider whether an alternative might be the only option," Taylor told the New York Times.

On Wednesday, House Republicans officially voted to remove Cheney from her leadership position over repeated repudiations of Trump for inciting the Capitol riot and spreading the Big Lie that led to the Jan 6. attack. In advance of her ouster, the Wyoming congresswoman delivered a fiery speech on the House floor, warning her colleagues of "the president's crusade to undermine democracy."

"Every one of us who has sworn the oath must act to prevent the unraveling of our democracy," she declared in her speech. "This is not about policy. This is not about partisanship. This is about our duty as Americans. Remaining silent, and ignoring the lie, emboldens the liar."

Cheney's removal, a move supported by House Minority Leader Kevin McCarthy, D-Calif., a loyal Trump stooge, looks to have reportedly earned McCarthy a fair bit of blowback within his own caucus.

"Kevin McCarthy has pissed off enough members of his own conference that he's going to have to go back to his former days as a whip to try to figure out where his votes are" to become House speaker, one anonymous Republican told Politico's Playbook. "I'd be worried if I was him."

"He's flip-flopped on [Jan. 6 and whether it's] Trump's fault, it's not Trump's fault," said another. "It seems like he doesn't have the backbone to lead. He bends to political pressure. It's tough to do when you're speaker. You have to lead."

Over the past several weeks, McCarthy has worked to elevate Rep. Elise Stefanik, R-N.Y., a young Republican elected to Congress as a moderate Republican but who quickly morphed into Trumper, to replace Cheney as the party's conference chair. Cheney's removal, meanwhile, has prompted a variety of other high-profile Republicans to publicly speak out against their own party this week.

On Sunday, Rep. Adam Kinzinger, R-Ill., compared the Republican Party to the Titanic. "We're like, you know, in the middle of this slow sink," he said. "We have a band playing on the deck telling everybody it's fine. And meanwhile, as I've said, you know, Donald Trump's running around trying to find women's clothing and get on the first lifeboat."

Former GOP Senator Jeff Flake, R-Ariz., who decided to retire after becoming a vocal critic of Trump, wrote in a recent Washington Post op-ed that "there is no greater offense than honesty" in the modern Republican Party.

Perhaps that is evidenced by something of an exodus of American voters from the GOP. According to a Gallup poll from April, the GOP faces the largest party identification deficit amongst American voters in nearly a decade. While 49% of Americans identify as either Democrat of Democratic-leaning, just 40% identify as Republicans.