During a House hearing on the Capitol riot, Republicans defended the people who attempted to overthrow the election 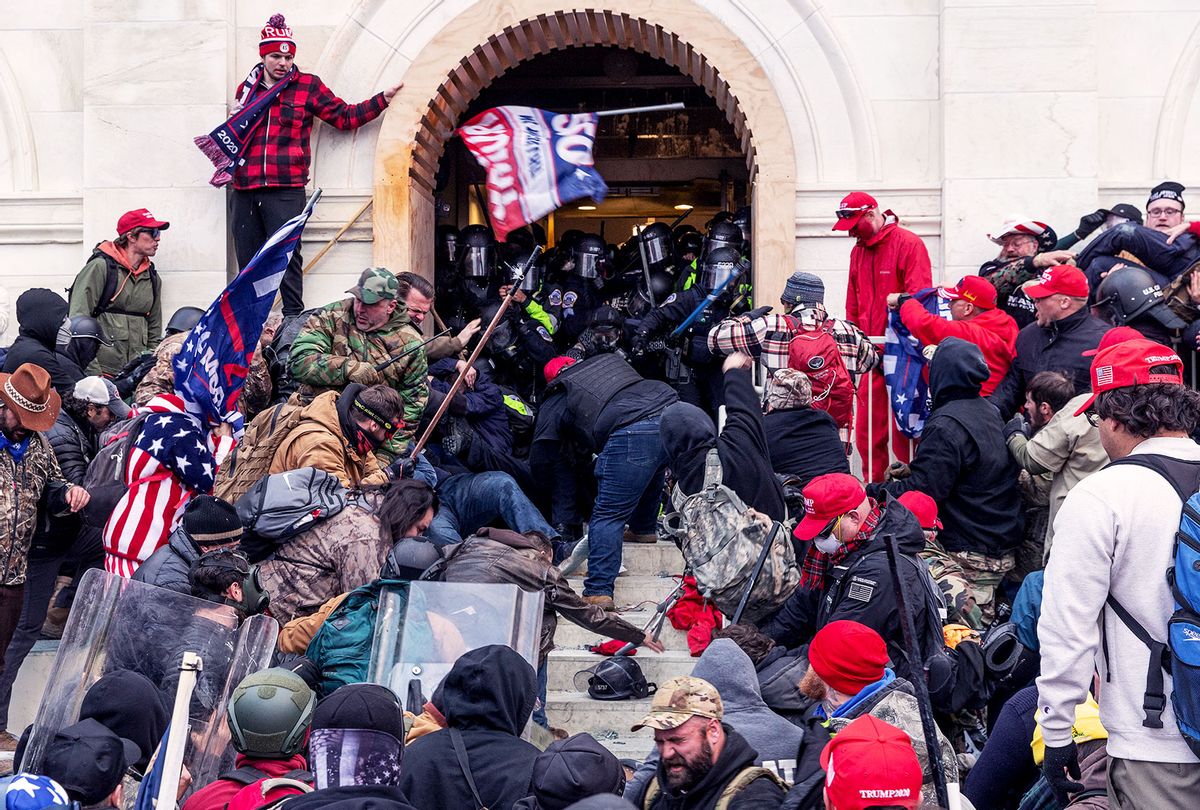 Rioters clash with police trying to enter Capitol building through the front doors. Rioters broke windows and breached the Capitol building in an attempt to overthrow the results of the 2020 election. Police used batons and tear gas grenades to eventually disperse the crowd. Rioters used metal bars and tear gas as well against the police. (Lev Radin/Pacific Press/LightRocket via Getty Images)
--

After Rep. Liz Cheney, R-Wyo., was ousted from her role as third highest-ranking member of the GOP in the House on Wednesday, Republican leaders tried very hard to convince mainstream reporters it was for some other reason than what it obviously was: Cheney remains unwilling to go along with Donald Trump's Big Lie.

"I don't think anyone is questioning the legitimacy of the presidential election," House Minority Leader Kevin McCarthy, R-Calif., blatantly lying about Trump's claims that the election was stolen from him and that the Capitol insurrection was a good thing, told reporters Wednesday. Trump — who is clearly still the de facto leader of the GOP — also spoke out on Wednesday, raving on his blog: "If a thief robs a jewelry store of all of its diamonds (the 2020 Presidential Election), the diamonds must be returned."

McCarthy's little tapdance is meant to hoodwink mainstream political reporters into believing that Republicans aren't actually an anti-democratic party lining up behind a fascist who literally tried to overthrow a democratic election. But it's a lie so hamfisted that it's not even getting by the notoriously credulous D.C. press corps. After all, everyone knows Cheney was a fierce ally of Trump's until he incited a mob to storm the Capitol, threatening the lives of her and her colleagues. Remember, it was a bridge so far that even McCarthy was angry at the time, until his ambition caused him to slither back on his belly to the man who sent a violent mob to the Capitol.

But regardless of who McCarthy thinks he's fooling, the reality of where the GOP is headed was made all too clear elsewhere on Capitol Hill on Wednesday.

House Republicans used a hearing about the Jan. 6 riot as an excuse to repeatedly defend the people who rioted to overthrow a legitimate election. Rep. Paul Gosar, R-Ariz., insisted that the people who stormed the Capitol and demanded to "hang Mike Pence" were merely "peaceful patriots" who are being persecuted by federal prosecutors. Rep. Andrew Clyde, R-Ga., described the attack — in which 140 police officers were injured, including one who died, one who had a heart attack, and one who had an eye gouged out — as "not an insurrection," but a "normal tourist visit". Rep. Ralph Norman, R-S.C., threw his support to the "false flag" conspiracy theorists, saying, "I don't know who did a poll to say that they were Trump supporters."

GOP thematics at Jan. 6 hearing so far: Trump did nothing wrong, Trump supporters lost lives that day, was mostly a peaceful protest for free elections, law enforcement overly zealous investigating now. Some parallel universes are dangerous - to the truth and to democracy.

These claims are gaslighting, as they demand that audiences ignore the evidence of their own eyes. They're nonsense and they contradict each other. But really, the point of this exercise is not to put forth rational claims that hold up under rigorous scrutiny. The point is to signal to the GOP faithful that it's now canon that the insurrection was a good thing and that they should feel free to use whatever rhetorical gambits — no matter how trollish, dishonest, or idiotic — necessary in order to deflect criticism from the supposed patriots who tried to bring an end to democracy on Jan. 6.

McCarthy's bewildering attempt to pretend the Cheney ouster is about anything but reinforcing Trump's Big Lie was an act for the mainstream media, but the Republican performance in Wednesday's hearing was all about the GOP base. These congressmen perform their antics for the camera with the knowledge that the videos will be edited and disseminated through social media outlets, where Republican voters increasingly go to get "news" from ever-shadier sources, unencumbered by inconvenient facts or reality.

During his misleading remarks Wednesday, McCarthy repeatedly tried to imply that Cheney's ouster was merely an attempt to move on from the 2020 election, instead of what it actually was, a show of support for the Big Lie and a warning shot to other Republicans of the consequences for defending democracy. In reality, Republicans haven't moved on at all. On the contrary, the entire party is organizing itself around Trump's false claims that the election was "stolen," and are focusing way more on trying to manufacture evidence for his claims and pass voter suppression laws based on his lies than they are, say, arguing against Joe Biden's proposed infrastructure plan.

It's not just in the House, either.

On Tuesday, Sen. Ted Cruz, R-Tex., spent a hearing about voting rights floating wild-eyed conspiracy theories about voter fraud, for the obvious purpose of propping up Trump's Big Lie. He tried the "I know you are but what am I" style of argument, insisting that Democratic efforts to expand ballot access are "Jim Crow 2.0". (In reality, Jim Crow was about denying people the ballot, not expanding it.) He repeatedly insisted that automatic voter registration leads to widespread voter fraud.

"Do you have any studies you want to present for the record that document extensive mistakes being made, which people who are non-citizens are registered to vote?" Merkley demanded.

"I'd like to offer you the opportunity in good faith, Sen. Cruz, to present any evidence for the record to this committee that in any of the states where this policy exists, if there's any widespread registration by people who should not be eligible to vote," Ossoff asked.

Of course, Cruz didn't have any evidence, as no such evidence exists. He's just a big, fat liar. But, for his purposes, none of this matters. All that matters is being on camera, hyping the conspiracy theories about "fraud" and "stolen elections," which in turn will be used to justify future Republican efforts to actually steal elections.

On Tuesday, Sen. Lindsey Graham, R-S.C., tried to defend this fealty to Trump and his Big Lie on political grounds, saying that Trump is "the most popular Republican in the country by a lot. If you try to drive him out of the Republican Party, half the people will leave."

On its surface, this logic doesn't make a lot of sense. Trump lost the 2020 election, in no small part because, no matter how much the GOP base loves him, the rest of Americans hate him and will crawl over broken glass to vote against him. Trump's strengths in rallying the base are wiped out by his ability to rally the opposition.

But, really, this defense of Trump and the Big Lie isn't about winning elections at all. On the contrary, Republicans are sticking by Trump because, as embarrassing and frightening as the insurrection was, it ultimately pointed to a path forward for their party to hold power without winning elections, by stealing them instead. Even if Trump was taken off the map tomorrow — say, by getting arrested for one of his many crimes — he helped advance the "why win elections when you can steal them" mentality. And that, more than out of any loyalty to Trump-the-cult-leader, is why the GOP has decided to stand behind Trump and the Big Lie.