HBO Max's film about smoke jumpers, those who leap from planes into fires, lacks the thrills it promises 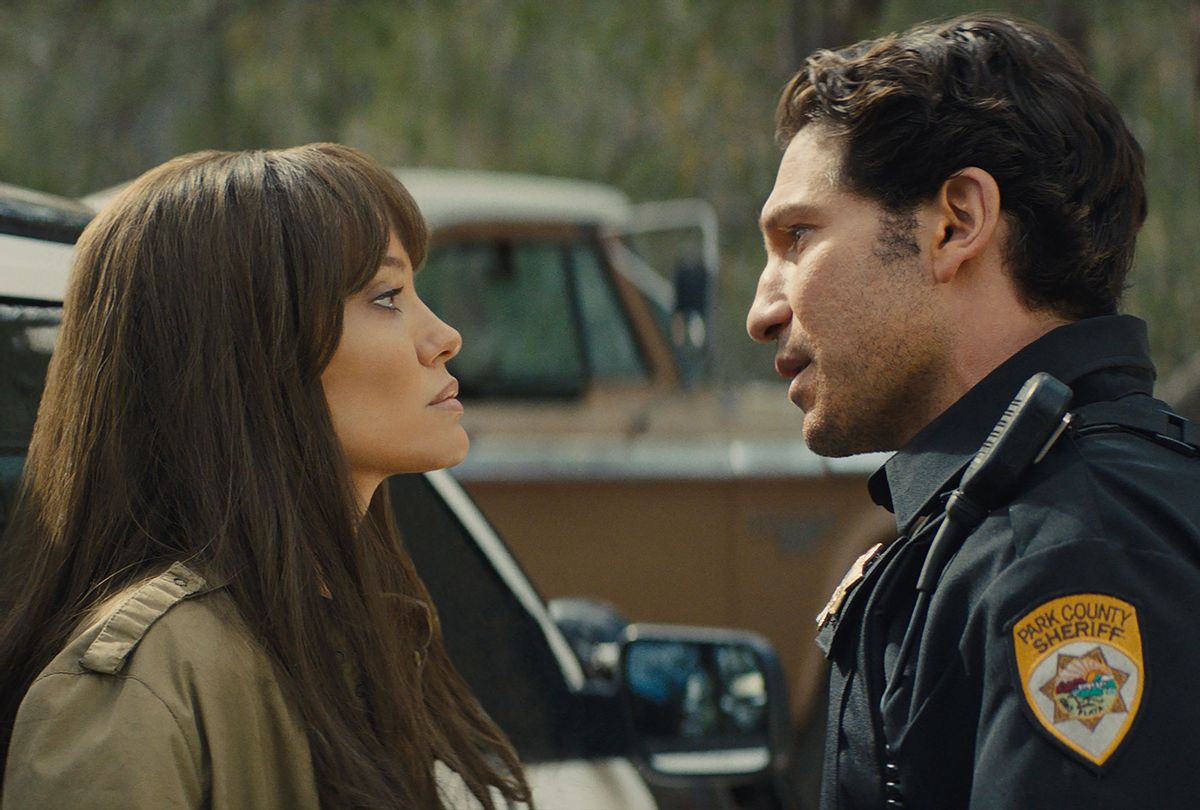 Angelina Jolie and Jon Bernthal in "Those Who Wish Me Dead" (Warner Bros. Pictures)
--

The exhilaration of jumping out of a plane with a parachute is not quite the feeling viewers may have watching "Those Who Wish Me Dead" — even if they venture to see it in a cinema. This lame new thriller, which simultaneously releases in theaters and on HBO Max, contains only a modicum of thrills, which is disappointing for a survival story set in the world of smoke jumpers.

The opening sequence promises excitement as Hannah (Angelina Jolie) jumps from a plane and into a fiery forest. But this is actually a nightmare; she is haunted by the death of three children she tried to save the year before.

Cut to Fort Lauderdale, where brothers Jack (Aidan Gillen) and Patrick Blackwell (Nicholas Hoult) are posing as gas men. They deliberately blow up the house of some Florida man who has dirt on the Governor and Congressmen. When forensic accountant Casserly (Jake Weber) hears about the explosion on the news, he takes his pre-teen son Connor (Finn Little) and heads to Montana to see Ethan Sawyer (Jon Bernthal) to hide out. He has the incriminating evidence that the Blackwell brothers want. "Those Who Wish Me Dead" is pretty much an extended chase film in which the Blackwell brothers try to capture Casserly and Connor in the wilderness.

The forest backdrop is meant to provide an interesting environment for the action to unfold, and the scenery is magnificent. However, director Taylor Sheridan (Oscar-nominated for writing "Hell or High Water"), one of three screenwriters adapting Michael Koryta's novel, makes the characters so one dimensional that the trees have more depth.

Hannah, the sole female smoke jumper, is relegated to a watch tower because she failed the psych exam after the tragedy last year. She is looking for redemption. She is also Ethan's ex, an unnecessary contrivance; Ethan's wife, Allison (Medina Senghore) is six months pregnant. But these relationships do not enhance or even complicate the plot. When the Blackwells come after each of them, they only want to survive and protect Connor (and Allison's unborn baby).

The early scenes play out one person's expected death and another's escape. This happens around the same time Hannah's lookout station gets zapped by lighting, which makes communication useless. "Those Who Wish Me Dead," sets up all these plot points, but it does not build suspense. Then Jack sets fire to the land with some flares to distract the smoke jumpers while he hunts for the escapee.

Alas, much of Sheridan's film seems more foolhardy than clever. Sure, there are some nice visuals of raging fires, and there are atmospheric moments of ash swirling around various characters. There is even a pretty cool underwater shot. But viewers never quite feel the heat of the CGI flames illuminating Jolie's chiseled cheekbones.

One of the most horrific scenes in the film has the Blackwells paying a visit to Allison in the hope of learning one of Connor's whereabouts. To coerce her to cooperate, they put a poker in the fire and threaten to brand her. That Allison is a Black woman makes this image especially troubling. At least her response to her predicament provides one of the film's few satisfying moments.

But much of "Those Who Wish Me Dead" is wrongheaded. A cameo by Jean Hersholt Humanitarian Award winner, Tyler Perry, as Jack's boss, seems superfluous. And it may be mildly amusing for Hannah to teach Connor the lyrics to the song, "Mother Pheasant Plucker," but it just provides some calm before the storm. Viewers themselves may be just waiting for the action, which eventually comes as the plotlines converge. If Sheridan's film is meant to convey the long stretches of boredom before brief moments of excitement, it succeeds.

Without giving too much away, there is gunfire, there is forest fire, and there's Hannah wielding a weapon. The action set pieces are all competently rendered, but it raises the question: Why can't they be better, or more intense? The narrative never feels propulsive. When the Blackwells employ Ethan to help them track Connor, Ethan dares them to shoot him, knowing that they need him to achieve their goal, which is to create a zero sum game. That seems to be the film's goal too, dispatching some characters and redeeming others while viewers wait for the smoke to clear.

Moreover, Jolie is overqualified to play Hannah. She spends far more of her screen time in mama bear mode than she does as an action hero. (There are few stunts, mostly falls.) Finn Little is admirable as Connor, but the reliable Jon Bernthal is not given enough to do here. Ethan's moments with Allison are best, but that is because Medina Senghore steals her every scene. Watching her make good choices is the best thing about the film. In support, Nicholas Hoult offers some menace, however, Aidan Gillen seems to be phoning in his performance.

"Those Who Wish Me Dead" is pretty much dead on arrival.

"Those Who Wish Me Dead" releases in theaters and on HBO Max on Friday, May 14.

Movies Review Those Who Wish Me Dead