The endocrine gland has become culturally linked with metaphysics, drug-induced states, and even time travel 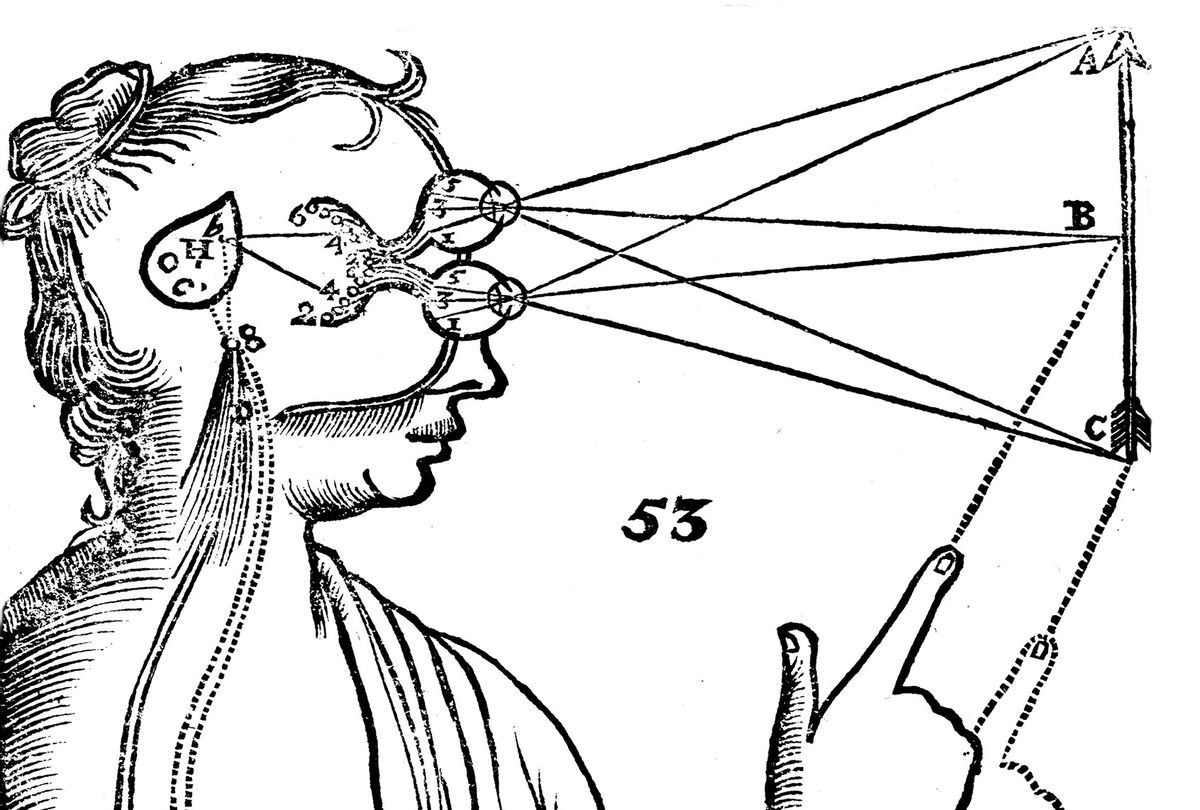 Descartes' (1596-1650) idea of vision, [1692]. The passage of nervous impulses from the eye to the pineal gland and so to the muscles. From Rene Descartes' Opera Philosophica (Tractatus de homine), 1692. (Oxford Science Archive/Print Collector/Getty Images)
--

The pineal gland, a reddish-gray, pine cone-shaped part of the brain, is unremarkable at first glance: It's about a third of an inch long and tucked deep in the brain, near the center and between both hemispheres. Yet it has captured a surprising amount of cultural attention. In the 1998 film adaptation of Hunter S. Thompson's "Fear and Loathing in Las Vegas," the extract of a pineal gland is said to "turn you into something out of a goddamn medical encyclopedia." The 2019 science fiction film "Synchronic" focused on a drug that used the pineal gland to alter how we experience time. H.P. Lovecraft's horror story "From Beyond" featured a mad scientist who invented a pineal gland–stimulating machine to allow human beings to perceive other planes of reality. There is a cottage industry of spiritualism books that focus on the pineal gland.

So if the pineal gland is neither a vessel for time travel nor multiverse encounters, what explains the science fictional and spiritual obsession over this part of our endocrine system? And how did it gain a reputation for being a neurological tabula rasa?

That requires knowing a little about what the pineal gland actually does do. Indeed, the pineal gland's main function involves a hormone called melatonin, which helps you sleep and maintain healthy circadian rhythms. Most vertebrate animals have a pineal gland and they are widely considered to be essential parts of the biological machinery that enable us to sleep. As Dr. Gianluca Tosini of Morehouse School of Medicine told Salon by email, melatonin is also essential to other aspects of human health as it regulates important physiological functions such as blood pressure and insulin sensitivity. He also noted that its structure is pretty consistent among most species.

"The most striking difference among the different species is that in non-mammalian vertebrates the pineal gland is directly photosensitive and possess a circadian clock that directly regulates melatonin synthesis, the main product of this gland," Tosini explained. "In mammals the pineal gland is not directly photosensitive and the production of melatonin is under control of the circadian clock located in the brain."

This is all interesting, to be sure, but none of it explains why the pineal gland is associated with the metaphysical. To understand that, we must go back in time to the 17th century, when the French-born philosopher René Descartes argued that it was "the principal seat of the soul." He based that assertion on the anatomical features he perceived in the gland (many of his assumptions were wrong, even based on the medical knowledge which existed at the time) and the fact that, philosophically, he was inclined to believe that the mind and body were fundamentally separate entities. Other philosophers held that they were one and the same (and, therefore, that there is no soul), so Descartes needed to explain how the soul connects to the body. There was one feature of the pineal gland that particularly stood out to him in this respect — the fact that it was unpaired.

"I cannot find any part of the brain, except this, which is not double," Descartes wrote. "Since we see only one thing with two eyes, and hear only one voice with two ears, and in short have never more than one thought at a time, it must necessarily be the case that the impressions which enter by the two eyes or by the two ears, and so on, unite with each other in some part of the body before being considered by the soul." As he added later that year, "since it is the only solid part in the whole brain which is single, it must necessarily be the seat of the common sense, i.e., of thought, and consequently of the soul; for one cannot be separated from the other."

Scientists today, not surprisingly, reject Descartes' belief that the mind somehow exists independently of the body and is connected through this one gland. They also have done a much better job understanding its distinct physiology than Descartes ever did. Nevertheless, Descartes' fascination with the pineal gland as a link between our bodies and souls captivated philosophers. [Lovecraft, for what it's worth, may have been mocking Descartes' ideas in "From Beyond."]

Descartes was not the only major philosopher to locate significance in the pineal gland. Founder of a religion known as Theosophy, Helena Blavatsky argued that the pineal gland "is that which the Eastern Occultist calls Devāka, the 'Divine Eye,' or the 'Third Eye.' To this day, it is the chief and foremost organ of spirituality in the human brain." She specifically praised Descartes, arguing that "unscientific as this may appear in our day of exact learning, Descartes was yet far nearer the occult truth" than those who criticized his theories. "For the pineal gland, as shown, is far more connected with Soul and Spirit than with the physiological senses of man."

Ironically, there is some science behind the idea of the pineal gland as a "third eye," although the truth is more anodyne than the loftier metaphysical hypotheses.

There also is some scientific basis for hypothesizing that people might sincerely believe they have had spiritual experiences because of their pineal glands. Psychiatrist Rick Strassman, who teaches at the University of New Mexico School of Medicine and wrote the 2001 book "DMT: The Spirit Molecule," told Salon that he was drawn to studying the pineal gland "because of its history in esoteric physiology, the anatomical location of the subjective experience of exalted spiritual states." He wondered if the pineal gland might produce a chemical called N,N-Dimethyltryptamine (DMT) that has psychedelic effects on people similar to religious experiences — disembodied consciousness, overwhelming emotions, a feeling of spiritual serenity, visual and auditory hallucinations, and so on. Strassman performed extensive research on the subject, even becoming the first scientist to legally administer psychedelic drugs in the United States in 20 years. His ideas eventually found their way to Dr. Jimo Borjigin, a molecular and integrative physiologist at the University of Michigan Medical School.

"In 2013 she and her group published a paper demonstrating DMT in living rodent pineal gland," Strassman wrote to Salon. "However, their subsequent 2019 paper did not replicate that finding; instead, it appears that the DMT reported in the 2013 paper was contained in the brain tissue that the probe into the pineal had also collected. Nevertheless, the requisite enzymes for DMT synthesis occur in pineal, and I believe that the jury is not yet out regarding DMT synthesis in pineal."

If the pineal gland does in fact produce DMT, the next question is whether it plays any kind of role in "a potential DMT neurotransmitter system" that could exist in the body. "The hallmark of the DMT effect is the feeling that what one is witnessing is more real than real," Strassman noted, "therefore, perhaps the function of the endogenous DMT neurotransmitter system is to regulate our sense of reality." Certainly a 2019 paper by Borjigin which found elevated spikes of DMT in dying rodent brains suggests that DMT could not only play that kind of role when we live, but also explain near-death experiences as we pass away. The real mystery, Strassman observed, is why our bodies produce DMT at all both while we live and as we die.

"If there is a DMT neurotransmitter system, and if it regulates our sense of reality, that opens many interesting avenues regarding questions of how biological function (the body) affects the mind (consciousness) on a moment to moment basis," Strassman explained. "That is, if higher activity of the DMT neurotransmitter system is associated with a greater sense of reality (truth, certainty, importance, etc), and lower activity vice versa, what then regulates DMT activity?"

If it turns out that DMT is relevant to our thinking process and is produced by the pineal gland, then perhaps one Enlightenment philosopher wasn't entirely off base, despite his anatomical errors.

"Descartes may have been onto something," Strassman speculated.