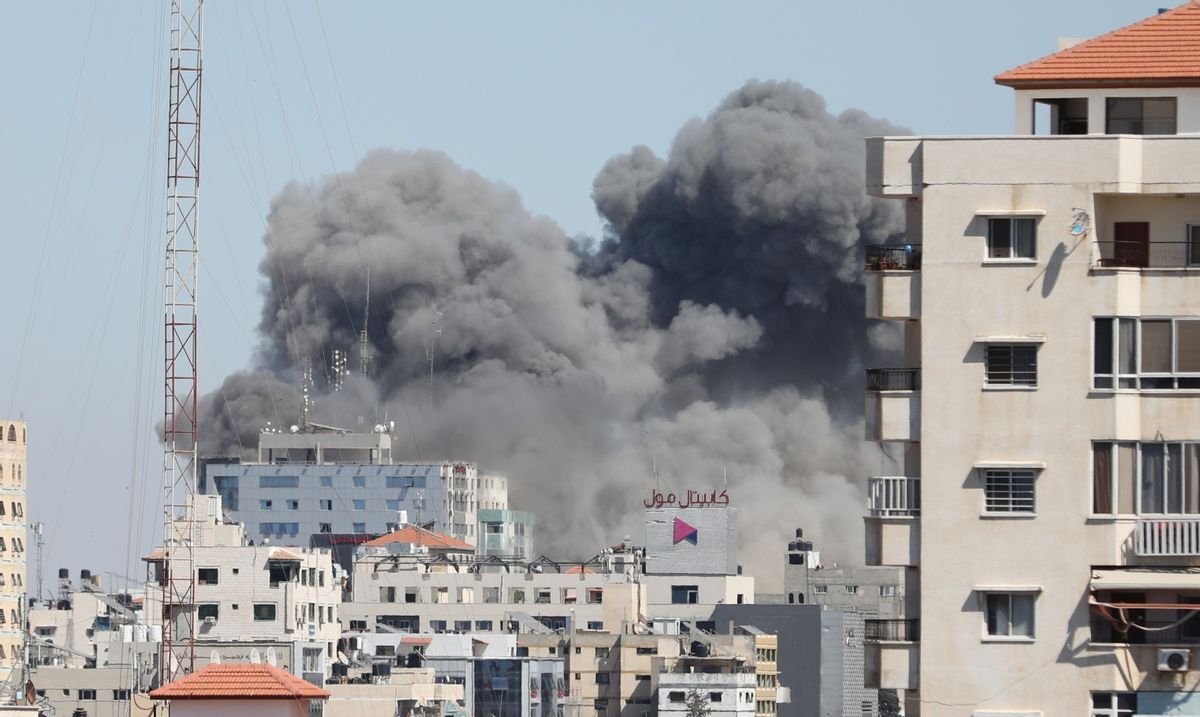 Smoke rises after Israeli forces destroyed a building in Gaza City where Al-Jazeera and The Associated Press had their offices. (Mustafa Hassona/Anadolu Agency via Getty Images)
--

An Israeli airstrike Saturday in Gaza City destroyed an office building used by The Associated Press, Al Jazeera and other news organizations — with several outlets broadcasting live footage of the bombing to their audiences across the world.

The AP reports all of its employees escaped the blast, though it remains unclear whether there were any other casualties.

The move was quickly denounced across the globe by press freedom advocates, who struggled to understand the reasoning behind the strike.

"We are shocked and horrified that the Israeli military would target and destroy the building housing AP's bureau and other news organizations in Gaza. They have long known the location of our bureau and knew journalists were there," AP President and CEO Gary Pruitt wrote in a statement.

"The world will know less about what is happening in Gaza because of what happened today."

Pruitt confirmed reports that the media outlets with offices in the building were notified about an hour ahead of the strike and told to evacuate — though the Israeli military declined at the time to provide any explanation for the impending attack.

The Israel Defense Forces later tweeted that the building contained "Hamas military intelligence assets," and accused the militant group of using the civilian offices as human shields. The IDF did not immediately provide any evidence to support these claims.

The attack comes amid intense fighting between Israel and Hamas militants in Gaza, with Palestinian civilians increasingly caught in the crossfire. At least 13 people in the Gaza Strip were killed by separate Israeli airstrikes on Saturday alone, officials told the BBC.

It also comes just one day after an Israeli military spokesperson was widely criticised for a vaguely worded statement to reporters that cited an ongoing ground invasion of Gaza — though the Associated Press, one of just a handful of American news organizations with reporters on the ground who could see that such an invasion was not actually taking place, called out the false statement in real time.

Al Jazeera, which had long maintained a newsroom within the targeted building, carried the bombing live and showed the moment it collapsed in a cloud of dust.

Interviews on the Qatar-based network — with its own journalists — revealed a mad scramble to evacuate and save as much equipment as they could.

"I have been covering lots of events from this building. We have lots of good memories with our colleagues," Al Jazeera reporter Safwat al-Kahlout said. "Now everything, in two seconds, just vanished."

According to the network's analysis, at least 140 people have been killed in Gaza since Monday — including 39 children and 22 women.

Saturday's strike also comes on the heels of another Israeli air raid targeting a nearby refugee camp Saturday morning, which the AP reports killed at least 10 people, mostly children.

Nine people have reportedly been killed in Israel by rocket attacks launched from Gaza.