Do octopuses have souls? "My Octopus Teacher" and the question of octopus consciousness 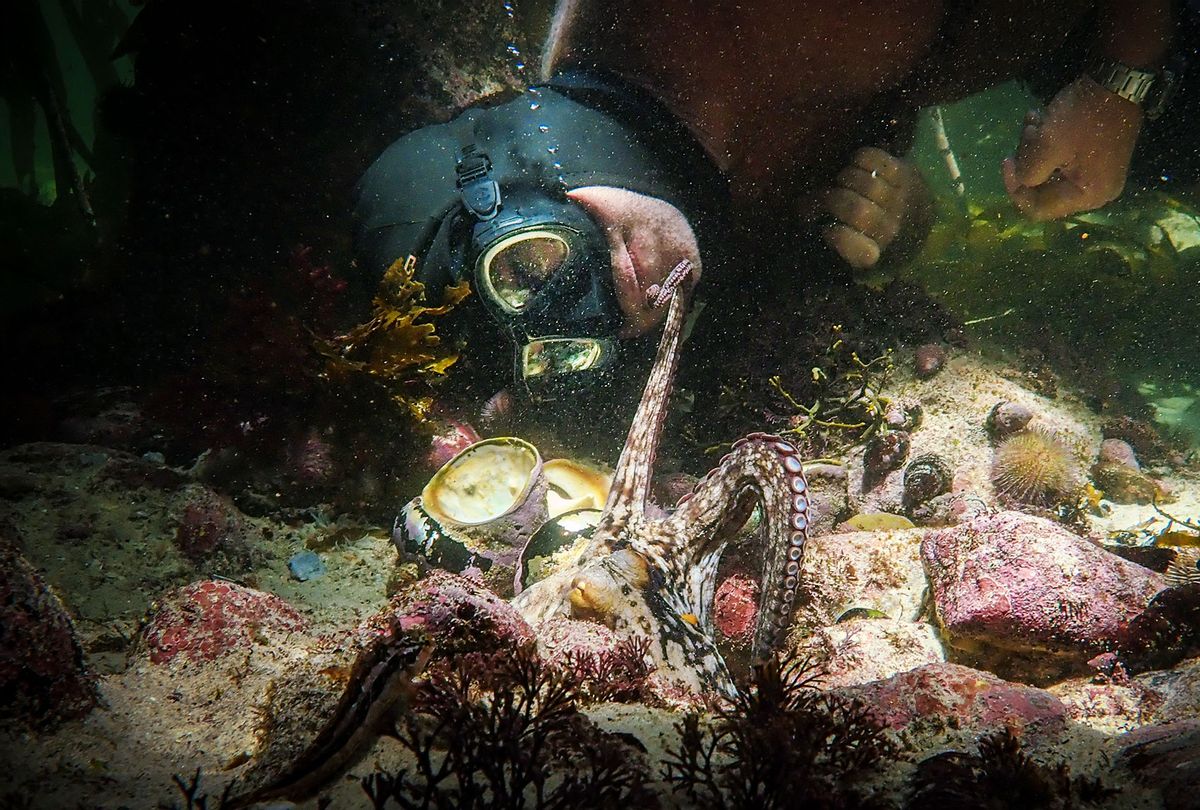 Though their appearance is downright alien, octopuses are far more like humans than meets the eye. The octopus and its cephalopod brethren have been known to exhibit play-like behaviors, to use tools, and to be relatively social creatures. Their behavior is so familiar that, despite their differences from us, they sometimes seem to be as conscious as humans.

That may not be the precise question formulated in "My Octopus Teacher," which won Best Documentary at the 93rd Academy Awards last month, but it is one that I couldn't stop thinking as I watched the film. The Netflix documentary tells the story of a South African man named Craig Foster who befriends a wild octopus while free-diving in a kelp forest. Because octopuses have short life expectancies (ranging from a few months to five years depending on the species), Foster was able to record much of the octopus' biography, from its hunting strategies and terrifying encounters with sharks to moments of playfulness and its inevitable death after laying eggs.

Yet as I watched the film, I kept wondering what was going in the octopus' head. For all intents and purposes, she seems to have a personality and a genuine feeling of acquaintanceship with Foster. Was I anthropomorphizing her — that is, incorrectly assuming that a non-human entity has human traits? Or could an octopus actually have a "soul," to use the non-scientific term for a sense of consciousness?

"One of the first things that really helped me to understand how an octopus might think is that their whole lives are about the tension between fear and curiosity," Pippa Ehrlich, who co-directed the film with James Reed, told Salon. She pointed out that scientists agree octopuses are extremely intelligent. They have advanced problem solving abilities, display a capacity for curiosity and are fast learners. This may make them seem human, but they aren't social animals like human beings (for the most part), so their intelligence isn't as oriented toward forging relationships. Their minds are also distributed in their bodies in a distinctly alien way, with each of their tentacles containing so many neurons that they can smell and taste as well as touch. As the film shows, an octopus seems to "think" with its tentacles as well as its head.

"With such a highly intelligent creature, it's likely to get bored," Ehrlich explained, speculatively deconstructing the titular octopus teacher as one might expect a screenwriter to get into the mind of a human character. "It wants to explore. It wants to be entertained. But it's also completely liquid and soft. It has no physical protection against anything, apart from being able to hide in small spaces, because its liquid adds this incredible creativity that these animals have developed over time in order to receive predators and catch prey."

Compounding this internal character tension, Ehrlich said that she thought about how "an octopus has to live out its whole life in a year to two years, with common octopuses [the species featured in the film]. What does that mean? It means that these animals have to learn incredibly quickly."

This is evident in "My Octopus Teacher." Our protagonist covers herself with various items on the sea floor to escape detection at a moment's notice, uses Foster's own body to capture prey and comes up with a particularly savvy strategy for surviving a shark attack. Nor is this type of behavior limited to Foster's friend: A Roman historian in the third century AD wrote about the octopus's "mischief and craft," and scientists ever since have observed that these creatures can recognize individual human beings, store long-term memories and often behave quite differently from one another in similar situations.

In other words: They seem to have individual personalities.

"I was astonished coming to it," Reed recalled to Salon. "I had no idea that the octopus was capable of this level of behavior and obvious strategizing and learning and clear recognition. I just had assumed that this was too alien of a creature to actually have those sorts of connections."

He emphasized that, because the film is anecdotal, we should be cautious about assuming that what happened with Foster and his octopus would be universal to all octopuses. Scientists simply do not know enough about wild octopuses to know how they would behave in similar circumstances.

Then again, Reed noted, that's part of what makes this subject so interesting.

"What was quite clear to us was that there was an individual character here," Reed said, referring to the octopus. And while on some level that made the octopus relatable, it also made it more mysterious because — as with other humans — you can never be entirely sure what it's thinking.

"That's sort of the fun of any relationship, I suppose, is you're constantly trying to imagine what perspective is from that other," Reed mused. "We do that in human relationships. We can never be 100 percent certain of what somebody is thinking. We can try and read their behavior, and we can listen to what they're saying, but you never quite know because you're not actually in that person's head. It felt like it was a similar sort of game with the octopus that we were playing a little bit ourselves." As a filmmaker, he felt that "that's where the entry is in the story is. It is the gray areas, the things that are suggestive but not conclusive, all the sorts of higher levels of thinking and individual personality and an intelligence we can recognize."

Ehrlich perhaps summed it up best by describing how human beings and octopuses managed, very early in our mutual history, to become very different while remaining in important ways the same.