In another blow to "Trump Train" (which is not a train), Reagan Foundation nixes image of GOP hero in Trump cap 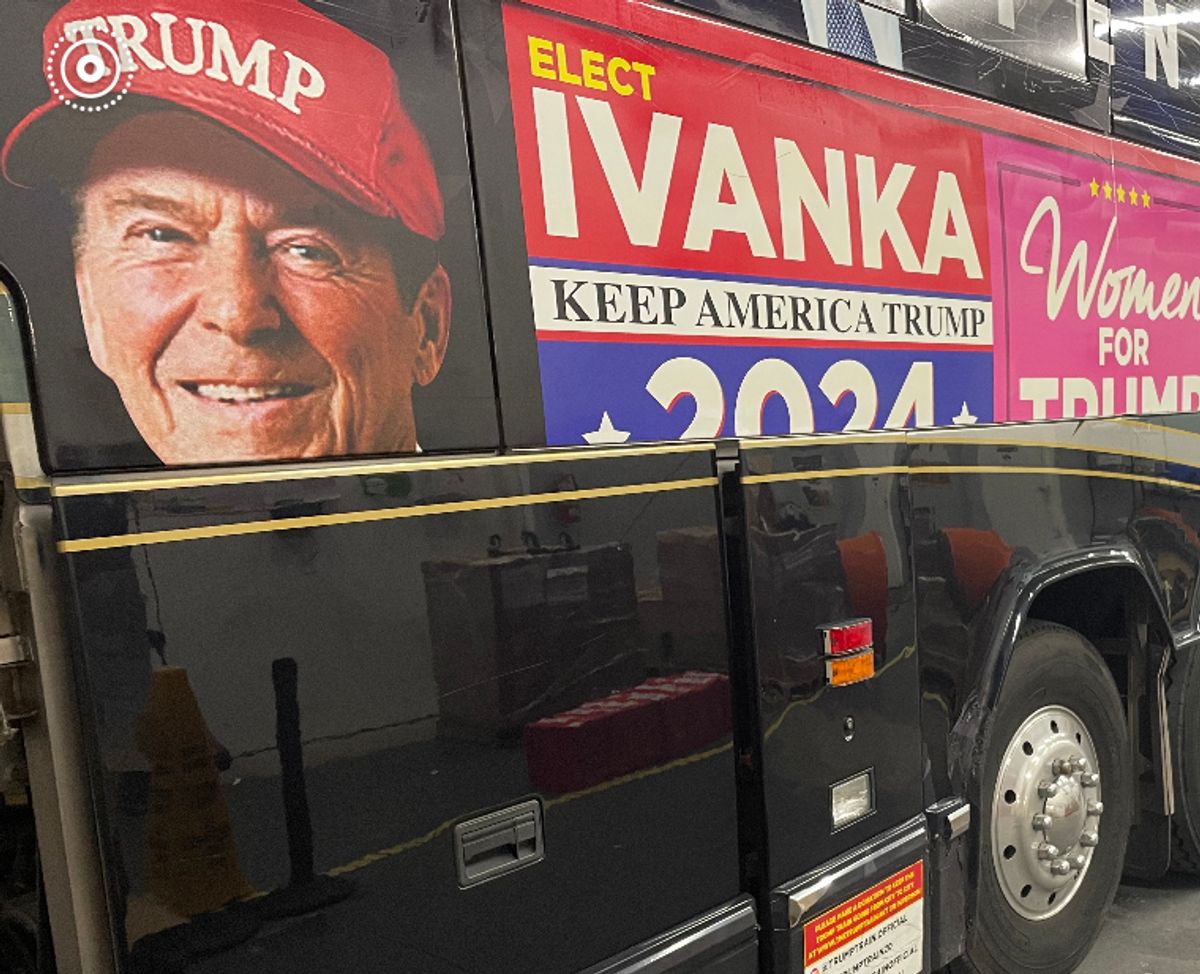 The "Trump Train" is not a train. In fact, it's a bus — a Trump-themed, campaign-style bus that travels the country drumming up support for the defeated ex-president, his family members, and their allies. The Trump Train has once again come under attack, this time not from the Queen of England or Buckingham Palace but from the nonpartisan organization that handles the legacy of former President Ronald Reagan, which wants the bus owner to remove an edited image of Reagan wearing a red "TRUMP" hat.

In a letter obtained by Salon on Monday, the Ronald Reagan Presidential Foundation and Institute demanded that Trump Train owner William "Buddy" Hall remove the image forthwith. "Remove Ronald Reagan's image from 'The Trump Train' by no later than Friday, May 21, 2021, and permanently cease all other use of Ronald Reagan's name and likeness for your tour bus services," the letter stated, which was dated May 13. 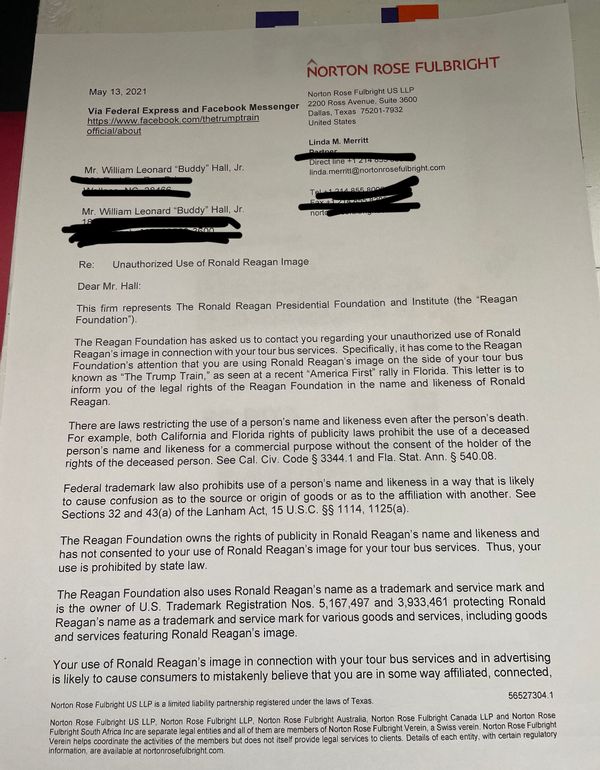 Interestingly, the letter sent to Hall by attorney Linda Merritt also CC'd the Trump Organization, which is presumably not involved with his unofficial bus tour. "If you agree to and comply with these requests, the Reagan Foundation will consider this matter resolved," the letter added. 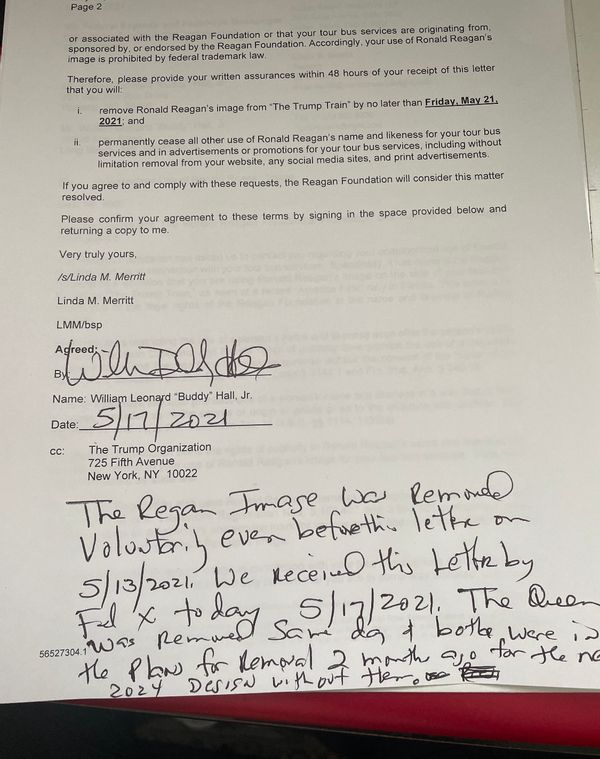 Speaking to Salon on Monday, Hall seemed disconsolate. "I got the images off of Google two years ago," he said, "so I felt since they were there on [the] public domain, it was fine to use." Hall expressed concern that removing Reagan's mug from the bus will harm the efforts of the greater Trump movement, since the bus may no longer make people smile "by the millions." "We never want to upset anyone, we want it to be a fun bus to make people smile as it does by the millions," he added. 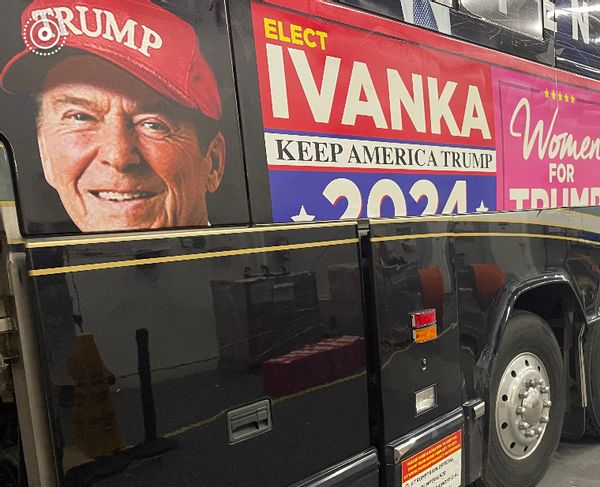 Hall said the Trump non-train is currently in Palm Beach, Florida, being rewrapped with new images of MAGA-friendly personalities that he hopes will provoke no further legal demands. He told Salon last week that the new exterior of the bus will feature a "Wall of Appreciation," bearing the likenesses of Fox News host Sean Hannity, MyPillow CEO Mike Lindell and Sen. Ted Cruz, among others.

Hall claimed on Monday that the edited image of Reagan on the bus has been removed but said he could not provide proof because he was not currently in Florida.

Greetings from The Villages, Florida. pic.twitter.com/4pBTUrHZdP

Attorney Linda M. Merritt, a partner at the legal firm Norton Rose Fulbright, and the Reagan Foundation didn't return multiple Salon requests for comment on Monday morning regarding their demand.

"The Ronald Reagan Presidential Foundation and Institute is a non-profit, non-partisan organization dedicated to the promotion of the legacy of Ronald Reagan," reports the foundation's website, which also offers educational opportunities and Reagan-themed merchandise.

"Reagan loved and admired Trump," Hill told Salon — a claim repeatedly made by the ex-president and his allies, without much-supporting evidence.