No, the media can't "move on" from Trump's Big Lie — not until Republicans end their war on voting 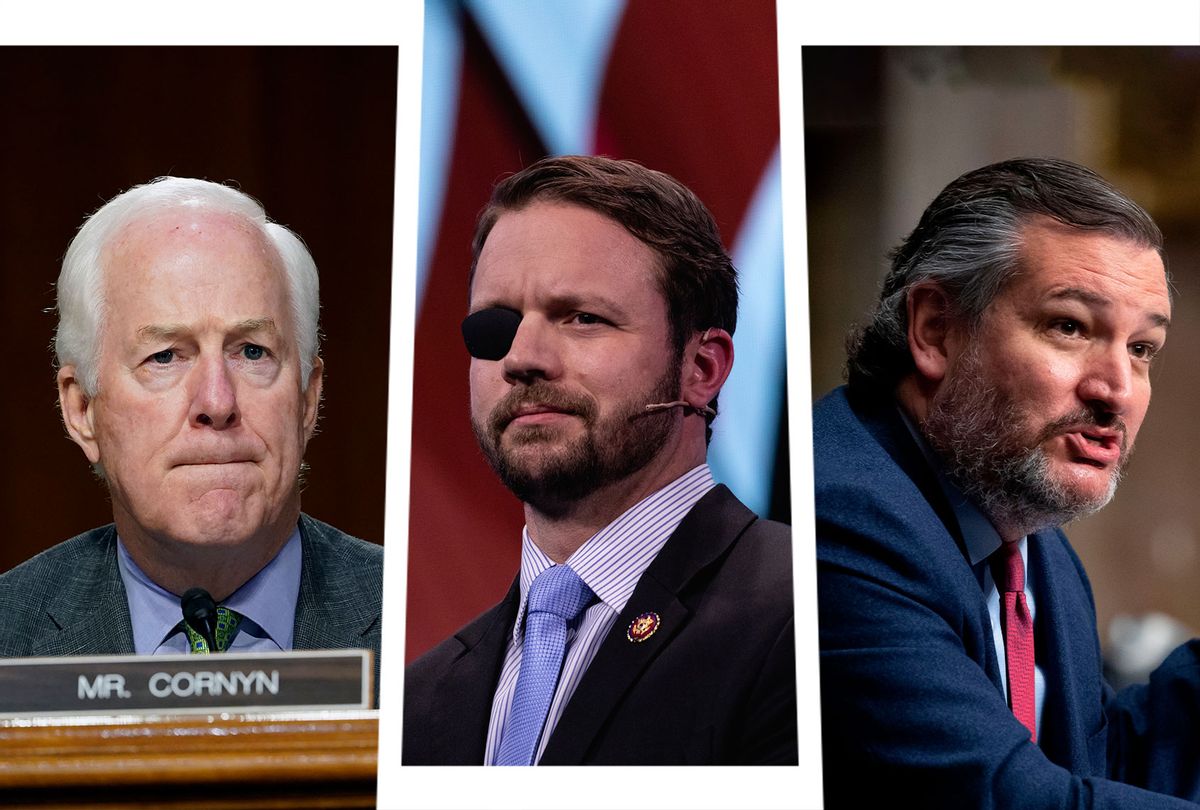 Texas Rep. Dan Crenshaw was pretty angry with NBC's Chuck Todd on Sunday's episode of "Meet the Press." Todd was uncharacteristically determined to hold the Republican's feet to the fire, calling him out for his support of Donald Trump's Big Lie.

"Why should anybody believe a word you say if the Republican Party itself doesn't have credibility?" the host asked. When Crenshaw, clearly annoyed at being called out for his B.S., retreated by whining that "the press is largely liberal," Todd was rightly contemptuous, retorting, "There's nothing lazier than that excuse!"

At stake: Crenshaw's support for Trump's false claims that Joe Biden stole the 2020 election, claims that Trump used to justify an attempted coup and to incite an insurrection on January 6. Crenshaw's main role in all of that, as Todd pointed out, was joining a lawsuit filed by Texas' Republican Attorney General Ken Paxton which leveraged false accusations of "fraud" in a failed attempt to get the Supreme Court to throw out the results of the election. During the interview, Crenshaw hid behind a line that is increasingly popular among Republicans who are trying to wave off questions about their support for Trump's attempted coup: "[I]t's time to move on."

Republicans are increasingly circling around this talking point. They insist that the coup is ancient history and that it's churlish to keep rehashing who did and did not join in efforts to overturn democracy. It's the favored justification for the ouster of Wyoming's Rep. Liz Cheney from House GOP leadership, with Republicans claiming it's not that she refuses to support Trump's election lies so much as that she just keeps going on about it. And it was the line that House Minority Leader Kevin McCarthy, R-Calif., trotted out last week, while trying to wave off media inquiries about the GOP's increasingly fierce backing of Trump's Big Lie: "I don't think anyone is questioning the legitimacy of the presidential election. I think that is all over with, we're sitting here with the President today."

The problem with this "water under the bridge" approach is twofold. First, it should be self-evident that seditious behavior should not be so easily forgotten or forgiven. Second, Republicans themselves have not moved on from the attempted insurrection or the lies that Trump used to justify it. On the contrary, Republican leaders have spent the past four months actively moving not just to turn Trump's Big Lie into GOP canon but to use it to justify laying the groundwork for Trump or some other GOP nominee to successfully steal the 2024 election.

"[I]f the current Republican Party controls both Houses of Congress on Jan. 6, 2025, there's no way if a Democrat is legitimately elected they will get certified as the president-elect," Erica Newland of Protect Democracy recently told Michelle Goldberg of the New York Times. As Goldberg goes on to detail, since the insurrection, Republicans "have systematically attacked the safeguards that protected the last election" — and not just with voter suppression laws, either.

Republican officials or politicians who stood against Trump's efforts to steal the election are being driven out of office and new laws are being passed to allow GOP-controlled state legislatures to invalidate the results of any election that a Democrat wins. Republicans are also passing harsh "electoral integrity" laws that are actually more about using threats of prosecution to intimidate election officials into looking the other way from GOP efforts to steal elections. And, as Goldberg writes, they are clearly lining up to justify it when a GOP-controlled House simply refuses to certify a Democratic winner of the 2024 election.

As Matt Gertz at Media Matters documented last week, the propaganda apparatus for the GOP — especially Fox News — has "responded to Donald Trump's 2020 defeat by institutionalizing his lie that the election was stolen and laying the groundwork to rig the next presidential election in favor of the GOP." Gertz writes:

Fox's propagandists are getting ready. They are cheering on the GOP's purges of officials insufficiently committed to authoritarian rule in the U.S. They are validating and valorizing the Capitol insurrectionists as patriots simply "there to support the president of the United States and defend our republic" rather than a collection of extremists. They are falsely claiming that Democratic pro-democracy legislation before Congress would "destroy the credibility of all future elections," while defending Republican efforts to restrict voting rights in the states.

In a piece at The Bulwark last month, Jonathan Last laid out how the GOP has been busy "removing the Republican officials who were not willing to comply [with the coup] last time" and plotting out "how a Republican can win the presidency even while losing the popular vote and the Electoral College," i.e. how to steal the next election. Mona Charen, part of the small and shrinking group of Republicans who still believe in democracy, warned in another piece at The Bulwark last week that "the 2024 mantra" of the GOP "is going to be 'Steal It Back.'"

I got a taste this weekend when I tweeted out Goldberg's piece. I got a vicious reaction, as one conservative tweeter after another retorted by with variations of the argument that they are entitled to steal the 2024 election as revenge for Biden stealing the 2020 election. Of course, this is a lie — Biden won fair and square — but it was a small indicator of how "steal it back" is, indeed, becoming the Republican mantra.

This has all happening a mere four months into Biden's presidency. Republicans still have three and a half more years to keep building the political will and infrastructure necessary to steal the election in 2024, and clearly have every intention of doing so.

Democrats, meanwhile, seem wholly unable to take measures to slow down the coup train, between letting the filibuster kill any hope of passing bills to prevent these Republican manuevers and Biden's unwillingness to unleash the Justice Department to hold Trump accountable for his many crimes, which would take Trump out of the equation in 2024. The only real obstacle to the GOP successfully stealing the 2024 election is the mainstream media continuing to call out Trump's Big Lie and those Republicans who continue to support it. The public's refusal to be complacent is the main reason Trump failed to steal the 2020 election, and if there's any hope of stopping Republicans from pulling it off in 2024, the public must stay alert and ready to fight for their democracy. That's why Republicans are trying to bully journalists into shutting up about the insurrection already.