"He's very much a peacock": Raúl Castillo on his "Army of the Dead" role and not feeling tokenized

The "Looking" alum appears in a trio of new films, breaking into Hollywood big-budget actioners for the first time 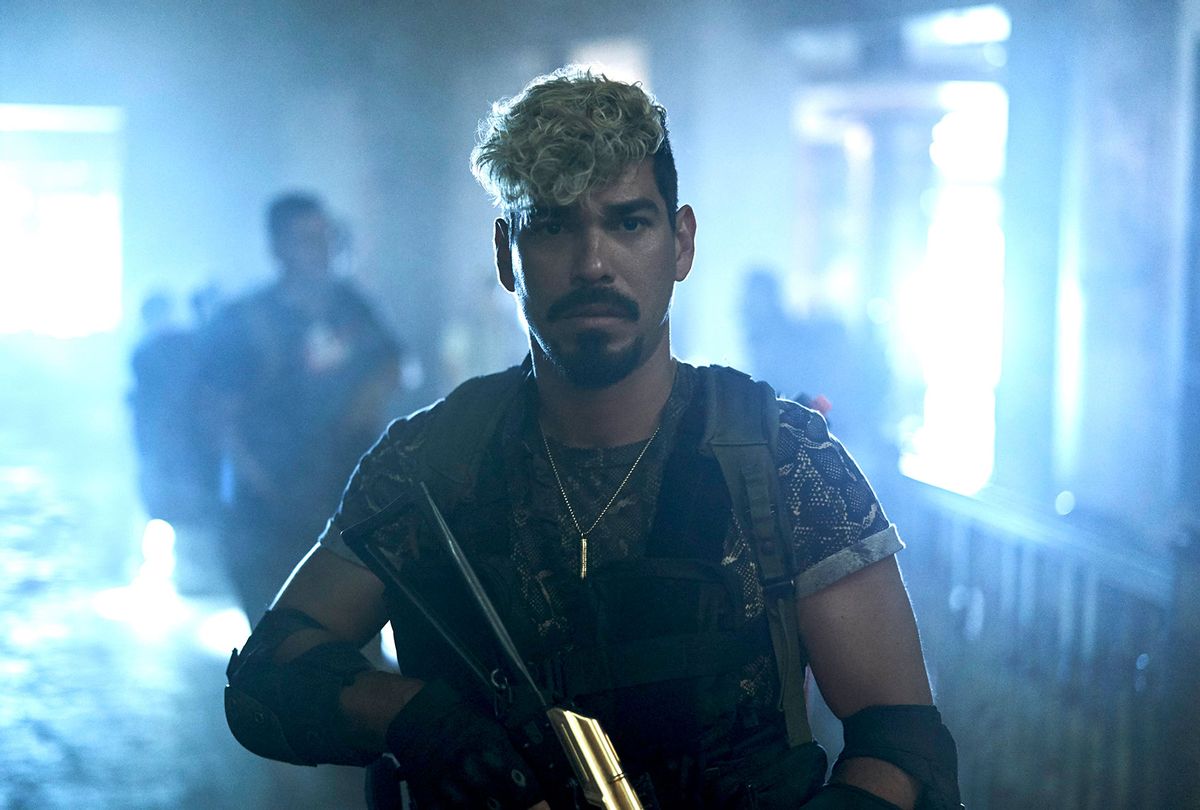 Raul Castillo in "Army of the Dead" (Netflix)
--

Raúl Castillo is one of those characters actors who really should be a leading man. While he has had starring roles in the indie films "We the Animals" and "El Chicano," he frequently works in television as part of an ensemble — he was the sensitive romantic, Richie, in the gay series "Looking," and one of the guilty cops in "Seven Seconds." He also has appeared in some great shorts, including "Limbo," and "Sloan Hearts Neckface."

Castillo is currently appearing in three films that showcase him playing characters with machismo. In Zack Snyder's "Army of the Dead," his trigger-happy YouTuber, Mikey Guzman, fights off zombies in Las Vegas while on a mission to recover $200 million in cash. In Guy Ritchie's "Wrath of Man," Castillo plays Sam, one of a crew of thieves looking to jack cash trucks. And in "iGilbert," which is screening at the Maryland Film Festival and the Philadelphia Latino Film Festival, Castillo is in toxic male mode as Tony, an Iraq vet with PTSD trying to win back his girlfriend, Jana (Dasha Polanco).

In real life, the actor is far more modest — and thoughtful — than the outsized characters he plays, which only shows how deep he will go in a role. In a recent interview, Castillo talked about his career choices and his current crop of films.

One of the things I wanted to discuss is your range. I like that you constantly work and mix it up. Do you feel you still have to prove yourself as "a Brown man in a mostly white industry"?

Less and less I worry about proving myself, and more and more I think about what kinds of projects I want to put out in the world. The slate of projects I put out this year were no-brainers for me. I try to trust my gut and when something comes through, I look for reasons to get excited about the work — or reasons to disconnect from it. With each of these projects, there were elements about them that excited me and made me thrilled to take them on.

You are starting to appear in more Hollywood films, as "Army of the Dead" and "Wrath of Man" attest. What observations do you have about working in big budget action films? Do you feel you are living the dream?

In certain ways, doing the big budget movies was confirmation that I could do them. Before it was the unknown. I had not worked on a production on the level of "Army of the Dead," or "Wrath of Man," so being in that playing space, and knowing that I could bring everything that I learned up to this point and apply it to the work that I'm doing in these very different projects is exciting to me — to stretch and leap into new territories. It's something I always wanted to do as an actor. I didn't want to stay on one path or play one kind of character. I wanted to play characters that are remarkably different from each other, and the characters in these projects certainly are.

How important is it for you to appear in Latinx films like "iGilbert" and even "El Chicano," for visibility and inspiration? Do you feel tokenized being part of an ensemble, or a responsibility to represent?

I never felt tokenized in these spaces because I've been part of an ensemble. Even when I was doing theater, I loved being part of an ensemble play. "Wrath of Man" and "Army of the Dead" are very much ensemble films, and it's fun to be part of a team. It's always fun to play in both, be with the family and be with Latinx artists and then to be the one [Latinx] person. Even in college at Boston University in the '90s, I knew it was important for me to be navigating in those spaces. Being a Mexican American from the border to explore in these spaces we don't get to explore a lot, traditionally. I don't feel responsibility [to do Latinx films] the only responsibility I feel is to myself. When I read a script and I'm excited about it and the character is specifically Latinx, I know where to ground him and if he's not, it's another conversation.

In "Army of the Dead" your character had dyed-blonde hair, wears a snakeskin shirt, and makes YouTube videos. You seem to be having fun playing a character who is having fun. Can you discuss how you created Mikey?

[Laughs] He was such a fun character to play. He's so different from anything I've played before. He's very much a peacock, and it was fun to put that on because I'm not like that in my daily life. That's why I became an actor — to explore other ways of being in the world. When I read the script, I figured him out, I knew he needed to be bold. It's a testament to Zack Snyder that he's very collaborative in nature. I came to him with this idea that he was a YouTuber and brash, and the blonde hair was an interesting choice. [Snyder] was open to it and we came up with this look. Zack really let me be creative with it. The character was so much fun — we got to shoot some YouTube videos that were not in the movie that might have another life. It was fun to play with the character of Mikey outside the realm of the film. We got to take him out into the world and have fun with him. The whole YouTube influencer gaming world is so rich and complex.

What can you say about playing tough guys with guns as you do in "Wrath of Man," and "Army of the Dead"?

There is a power and freedom to it. I like to mix it up. It's certainly something that I knew as a kid growing up in Texas. Hunting and that culture was ingrained in my immediate family in Texas. I was a typical kid who played with GI Joes, and I loved zombie films when I was a kid. I really did. Horror movies — I ate that stuff up before I started acting, I was obsessed with horror movies. A lot of times [on set] it feels like being a kid. The process of making ["Army"] is actually quite silly and joyful. The cast had a great camaraderie. It gave me respect for being an action star. It's really hard work, it's very tiring. It was humbling to experience that. It felt like child's play, even though it was all high stakes and you had to take the work seriously because when you do stunts, people's lives and livelihood is on the line. But at the same time, it's about having fun.

Did you get to do any stunts?

We did some stunts. Zack used doubles, and the zombies were stunt actors — they worked harder than anyone in all honesty. It was learning a whole new skill set as an actor. [Doing stunts] is all about relaxation, which boils down to theater training, which is rooted in relaxation. If you're tense doing a stunt, you're more likely to hurt yourself than if you relax.

In "iGilbert" you are menacing when your character kisses his girlfriend Jana (Dasha Polanco). He later tries to seduce her, but it is painful; she calls him a "tear drinker," because he is someone who enjoys her suffering. How do you get into that mindset of playing such a toxic man?

That's a testament to Dasha and the trust we felt with one another. It was such a dark journey and their relationship was so complicated. There is a lot of toxicity in it. She had my back and I had hers, and I could go there with her. I wasn't afraid to because she would tell me if she was uncomfortable. She trusted me, and that was important. You have to keep each other safe. The last thing I ever want to do is traumatize someone. It is dark and toxic, but Dasha let me go there.

While I admire your swagger, which you display in all three of these films, I like when you reveal some sensitivity. Do you crave playing romantic parts?

I am such an emo kid. I love romantic, dramatic work and I can't wait to do more of it. I have a subscription to the Criterion Channel, and I love arthouse movies, European, and foreign films and films that explore authentic versions of humanity. If I read a script that leans into that direction, I'm interested. It has to be good. That's what matters to me — a storyteller who can command a voice and working with directors who are real visionaries in any genre.

You made two "bag of money" movies back to back. How would you spend a big bag of cash?

[Laughs] There is so much going on in the world right now and so many people in need. My castmate Huma Qureshi from "Army of the Dead" is raising funds for the children of India that have been infected by the coronavirus.

You have told me in the past that you have written plays. Do you have any aspirations to film them, or write or direct a short or feature to create opportunities for yourself as an artist?

Definitely. There are a couple projects I've set in motion. Certainly, the last year, being in quarantine, I think a lot of artists have been creative and started thinking of how to tell their own stories. I want to put the muscle I developed as a playwright to use now. There are a couple on the producing end that I'm not writing, and one that I'm involved in the early stages of the script. It's a story I've wanted to tell for a very long time and hoping that I can see that through.

"Wrath of Man" is currently in theaters. "Army of the Dead" releases Friday, May 21 on Netflix.