On the Capitol riot and the fall of the Super League: A fable of the last days of capitalism

The masses are revolting (LOL!) — and they know what they don't want: Damn near everything about the last 40 years 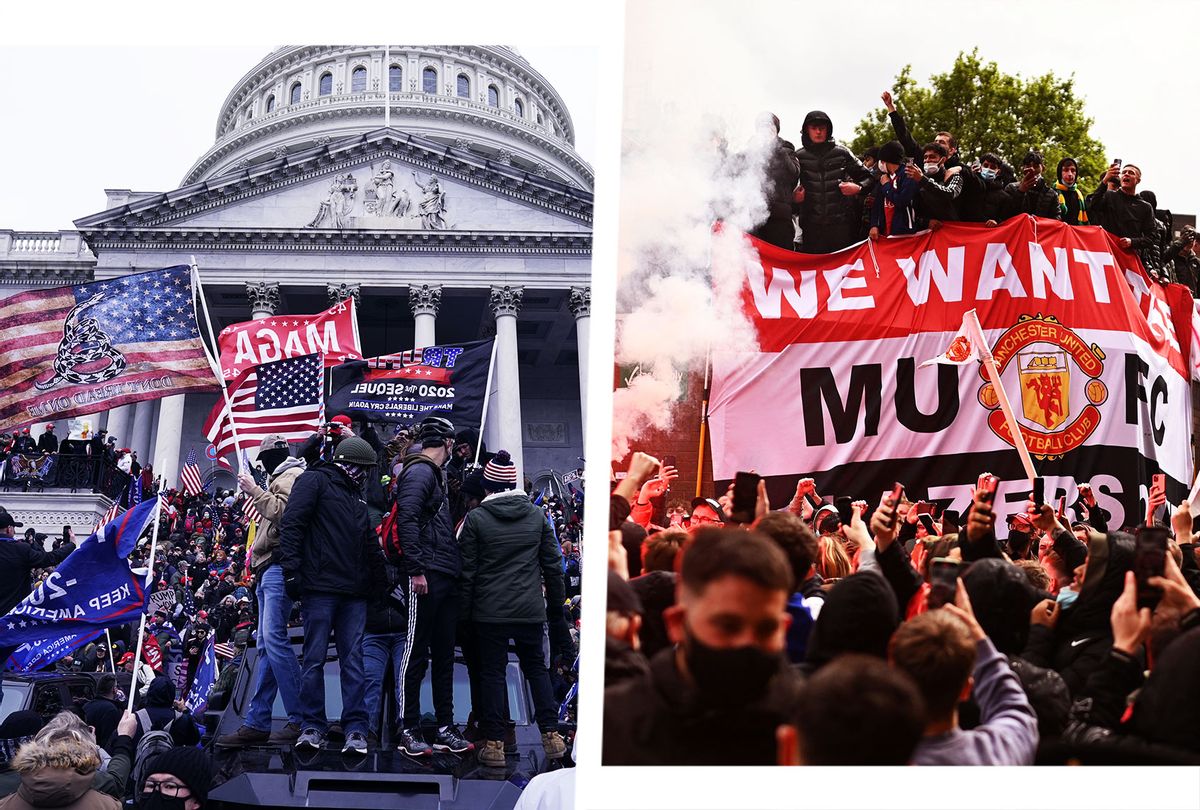 Protesters gather on the second day of pro-Trump events fueled by President Donald Trump's continued claims of election fraud in an to overturn the results before Congress finalizes them in a joint session of the 117th Congress on Wednesday, Jan. 6, 2021 in Washington, DC. | Supporters protest against Manchester United's owners, outside English Premier League club Manchester United's Old Trafford stadium in Manchester, north west England on May 2, 2021, ahead of their English Premier League fixture against Liverpool. (Photo illustration by Salon/Getty Images)
--

One news event of 2021 that blew by us not long ago vividly serves to illustrate the profound political confusion of our time. One aspect of that confusion is that it barely seemed to have a comprehensible political dimension at all, even though it culminated in a small-scale, low-impact imitation of the U.S. Capitol riot of Jan. 6.

I'm talking about the brief and spectacular career of the European Super League, which proposed to unite Europe's biggest soccer teams — by definition, among the most valuable and successful sports franchises on the planet — in a closed-competition entity somewhat modeled on the NBA or Major League Baseball. This scheme had been hatched as a semi-open secret for several years by a coterie of billionaire team owners, and was backed by financing from JPMorgan Chase in expectation of a record-breaking TV deal.

This small group of immensely wealthy men — and evidently all the toadies and financiers around them — believed this was a logical way to streamline and consolidate the awkward business structure of the world's most popular professional sport, which at present is carved up into numerous national leagues and international cup competitions. On paper, according to the logic that has driven global capitalism over the last several decades, that was an entirely sensible conclusion. It apparently did not occur to them that their plan might run into significant public opposition, probably because they simply hadn't noticed that the ground under their feet — rather, under everyone's feet — had shifted dramatically in political, ideological and cultural terms.

In any case, in the annals of disastrous PR rollouts, a new standard has been set: The Super League was announced with a late-night press release on April 18 and collapsed entirely three days later, after widespread public protests and political blowback, much of it from unlikely sources. (British Prime Minister Boris Johnson, for example, has not previously been seen as an enemy of Big Capital.) At least New Coke and the Edsel were products that managed to reach the marketplace. Team owners who briefly believed they had invented the Next Big Thing were left to eat crow on social media, apologize to their fans and vow repentance to their domestic leagues and the sport's governing bodies. For whatever reason, no one has bothered to shut down the Super League website, which stands as a digital Ozymandias monument to one of the great moments of hubris in recent history.

Two weeks after that, a match between Manchester United and Liverpool — perhaps England's two most famous teams, both involved in the Super League fiasco — had to be abandoned on May 2 after hundreds of protesters broke through security at Old Trafford, United's historic stadium. In a startling minor-key echo of what had happened four months earlier in Washington, the interlopers wandered around the stands and the field for a couple of hours setting off fireworks, committing acts of minor vandalism and, of course, posting everything they did on Instagram. I suppose we can't claim this was a case of history repeating itself as farce, since it had already been farce in the first instance.

Beyond some vague tut-tutting about the importance of peaceful protest — in this case, it's actually true that a much larger crowd remained outside and did not break the law — the sports media had no idea how to describe what had happened or why. Although there was clearly some connection between the Super League debacle and the Old Trafford riot, no one could quite explain what that was. Exactly what the Manchester United fans were angry about, and what they hoped to accomplish — a great many of them were wearing the team's expensive merchandise, even as they broke into its own stadium and trashed the place — is even less clear than in the case of the Capitol rioters, who had a proximate (if completely unachievable) goal.

It's fair to say that United's widely-despised American owners, the Glazer family of Florida — who also own the NFL's Tampa Bay Buccaneers — were the principal targets. But as with the Capitol attack, I think focusing too closely on the details is missing the point. Parochial impulses like anti-Americanism almost certainly played a role in Manchester, and so perhaps did uglier ones like antisemitism. But trying to frame these events in terms of good and evil, heroes and villains — depicting the Old Trafford invaders, for example, as a bunch of Little England bigots staging a micro-Brexit — is overly simplistic, and amounts to deliberately avoiding the lesson history is trying to teach us.

I'm almost surprised, in fact, that we never saw an op-ed by a professional smart person announcing that the Super League scheme was in some sense historically and socially progressive, and that its opponents were tiny, backward people stuck in the past. I guess there simply wasn't time for that, and in the current climate of public opinion, taking the side of, say, Russian oligarch Roman Abramovich and Sheikh Mansour bin Zayed Al Nahyan of Abu Dhabi — respectively, the owners of Chelsea and Manchester City, who will play in the UEFA Champions League final next Saturday — against the unwashed rabble didn't seem worth it.

I guarantee there are professional smart people who feel that way, perhaps more instinctively than intellectually, which points us toward two important elements of that history lesson. The first of those is that such critics would be half right: Everyone is stuck in the past. We live in an age of permanent nostalgia, when nearly everyone seems to believe they've lost something important, but can't, or won't, say exactly what that is. But if the rioters at both Old Trafford and the U.S. Capitol were trying to recover something unrecoverable (and perhaps indescribable), so too are those of us in the educated classes who sit behind desks and deliver them lectures.

The second part of the lesson is that the world those professional smart people helped create, and whose ideological and intellectual enforcers they have become, is built on the premise that capitalism and democracy are inextricably linked. In the decades since the end of the Cold War, they have assured us that those vaguely-defined terms of art had been bonded together in a Reese's Peanut Butter Cup of historical inevitability and would lead us, sooner or later, to the perfect society.

That has come back around, not to put too fine a point on it, and bitten them in the ass. Now that the perfect union of globalized capital and so-called liberal democracy looks like just as much of a delusion as the Marxist-Leninist permanent revolution, ordinary people around the world have become deeply suspicious of both halves of the equation. It may be vaguely correct to say that the Capitol riot was an attack against democracy and the Old Trafford riot was a protest against capitalism, and to claim that the first presented a dire threat with enduring consequences while the second was entirely symbolic and largely pointless.

But in the bigger historical picture I think we have to see them as two sides of the same coin. Both were explosions of incoherent popular or populist rage directed at the dominant liberal-capitalist order, whose decades of hegemonic rule (whichever political parties were nominally in power) have produced worsening inequality — both on a global scale and within the affluent nations of the West — along with a widespread sense of political disenfranchisement and cultural dislocation.

If some of that outrage takes exceptionally unpleasant forms — an embrace of authoritarianism, fascism or white supremacy, for instance — while some of it appears more "progressive" or radical, and a whole lot of it is ambiguous and difficult to define, that should not be surprising to anyone familiar with the patterns of history.

Our reluctantly deposed ex-president and his followers have famously wrapped themselves in a threat or promise to make America great again, a misty-eyed callback to some fantasy version of the 1950s, with their supposedly unquestioned racial and sexual hierarchies intact. I don't need to waste time convincing you that nothing about that invented reactionary utopia — America as perceived by Donald Trump in childhood, pretty much — resembles the actual history of the 1950s, a transitional decade characterized by tremendous turmoil and change.

It's certainly possible that some of the Old Trafford rioters harbored an equally unsustainable fantasy about a vanished era of bloody turf, early-morning pints and Players No. 6 cigarettes, when Manchester United was in some sense a local or distinctively "English" team and its jerseys (today bearing the iconic logo of an American car) weren't found on teenage bodies in Shanghai and Cairo and suburban Chicago. It seems entirely plausible that there were racist or nativist undertones to the wave of protests that brought down the billionaires' dream of a Super League to rule them all. Make footy great again!

But as one of my mentors in journalism told me years ago, not every story has a good guy and a bad guy, and your first responsibility is to tell the truth, not to take sides. For a great many people in the educated liberal classes of the Western world, the entirety of the popular revolt against both capitalism and democracy seems incomprehensible and more than a little bit terrifying. That's because they also long for their own version of the vanished and largely imaginary past: the age of neoliberal triumphalism, when it seemed obvious that the unified system of liberal democracy and global capitalism would rule everywhere and forever, with people like them (OK, like us) as its meritocratic elite.