How lunar eclipses altered the course of history

In war, imperialism and science, lunar eclipses like today's sometimes have world-shattering repercussions 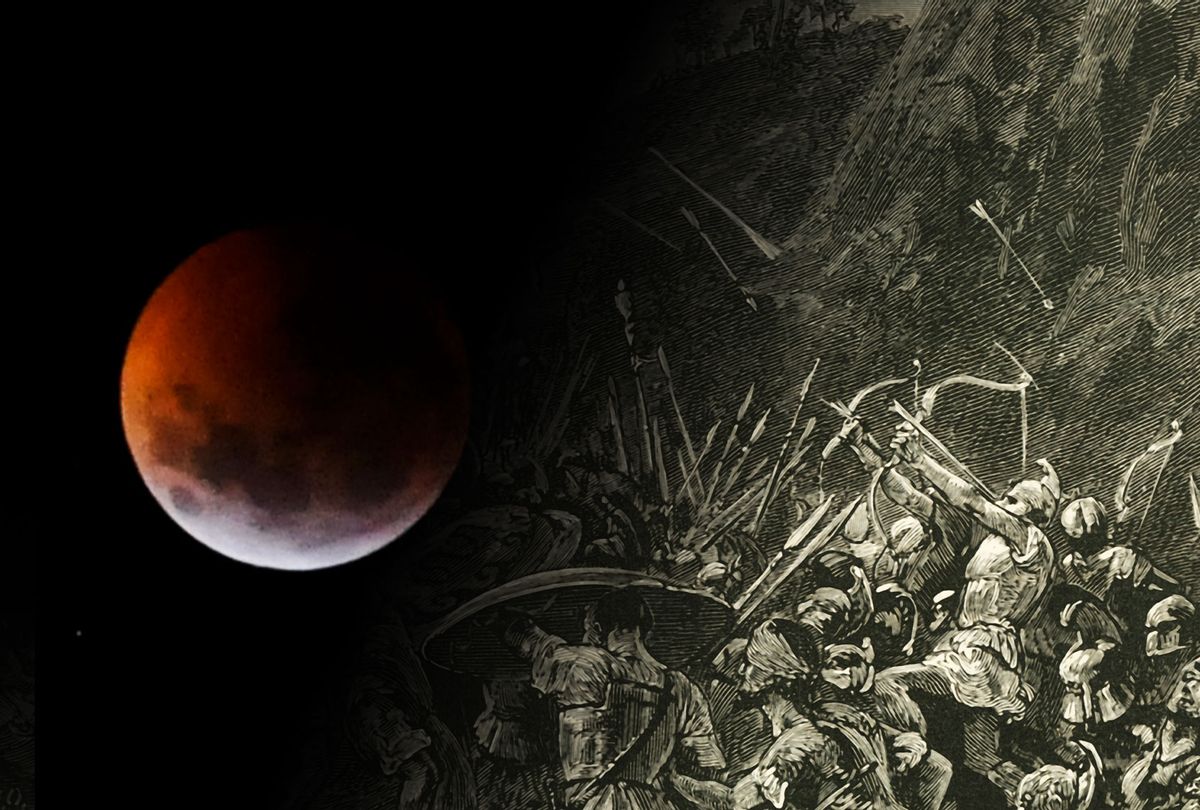 Christopher Columbus, the notoriously tyrannical sea explorer who couldn't tell the American continents from India, knew enough about lunar eclipses to literally save his life. The year was 1504 — a dozen after his famous sailing across the ocean blue — and Columbus was stranded with his men on the island now known as Jamaica. Characteristically, he was clashing with the indigenous people of the island, the Arawaks, who refused to supply the crew with food after the Europeans repeatedly cheated, stole from and violently attacked them.

Columbus, who had already been punished by the Spanish crown for abusing people, decided he needed a tidy resolution. He consulted an almanac containing accurate astronomical tables and, learning that a total lunar eclipse was scheduled to occur on February 29 to March 1, warned the Arawak chief that his Christian god was going to make the moon appear "inflamed with wrath" as a foreshadowing of future punishment. When the mood did indeed take on a "bloody" appearance, the Arawaks promised to resume supplying food to Columbus and his men if he appeased his god. Columbus said he would talk with him, retreated into his quarters, used an hourglass to figure out exactly when the eclipse would end and then employed theatrics to convince the Arawaks that he had ended it.

This is but one occasion when a lunar eclipse — like the one that will grace the heavens tonight, May 25, 2021 — has affected the outcome of a major historical event. (Perhaps for the worst in this case: one wonders if history would have been bettered if Columbus died for want of food that day.) There have been other times when superstitions were applied to lunar eclipses, with historic consequences; certainly Christopher Columbus, who for years believed he had sailed to Asia, is in no position to offer lectures on ignorance.

Even the ancient Greeks, who are rightly extolled for their significant influence over Western science and philosophy, were prone to self-destructive eclipse superstitions. In the year 413 BC, the Athenian general Nicias postponed a much-needed retreat because of a lunar eclipse. Although his army had been demolished by the Syracusans (who lived in modern-day Sicily), and they had just been reinforced by Spartans (think of the warrior-state from the movie "300"), Nicias and his priests believed that sailing back to Greece during a blood-red moon would spell bad news. Instead they brought the bad news on themselves, as their enemies took advantage of the military miscalculation and gradually slaughtered the Athenians and their allies.

Sometimes lunar eclipses have had more favorable meanings. The first century Romano-Jewish historian Josephus has argued that Herod I, the Roman client king of Judea who is believed to have ruled the province when Christ was born, died shortly after a lunar eclipse. (Herod I is reported to have been a brutal tyrant, so this death was not a bad thing for the masses regardless of Christ's impending birth.) A lunar eclipse also appeared in 1453 during the nearly two months when the Ottomans seized and eventually captured Constantinople, thereby counting as an augury of good news for them and of bad news for the soon-to-be-fallen Byzantine Empire.

Lunar eclipses have also been used to advance scientific and historical knowledge. This brings us back to the ancient Greeks: Aristotle deduced that the Earth was round because its shadow had a circular shape as it moved across the moon during an eclipse. Another important Greek astronomer, Aristarchus, devised formulas that he applied to data from a lunar eclipse to estimate the Earth's distance from both the Moon and the Sun. Thousands of years later, American polymath Benjamin Franklin wrote an influential treatise on the behavior of coastal storms on the Atlantic coast after he was disappointed about missing a lunar eclipse due to bad weather in Philadelphia and surprised that his Boston acquaintances did not have the same experience. Biblical historians have traced Christ's birth to the year 4 BC based on Josephus' accounting of the eclipse and when it occurred during Herod's reign.

Whether one chooses to attach deeper meaning to lunar eclipses like today's, or simply enjoys the show — they are caused when the Moon moves into the Earth's shadow while those two bodies are closely or exactly aligned with the Sun during the night of a full moon — it is at least sobering to think about how astronomy has corresponded with the past.

If you're nervous about the meaning of today's lunar eclipse, however, perhaps you should remember the wise words of French author Victor Hugo in his classic 1862 novel about the grand sweep of history, "Les Misérables."

"Nations, like stars, are entitled to eclipse," Hugo wrote. "All is well, provided the light returns and the eclipse does not become endless night. Dawn and resurrection are synonymous. The reappearance of the light is the same as the survival of the soul."