On Porchetta: An ode to the East Village stalwart 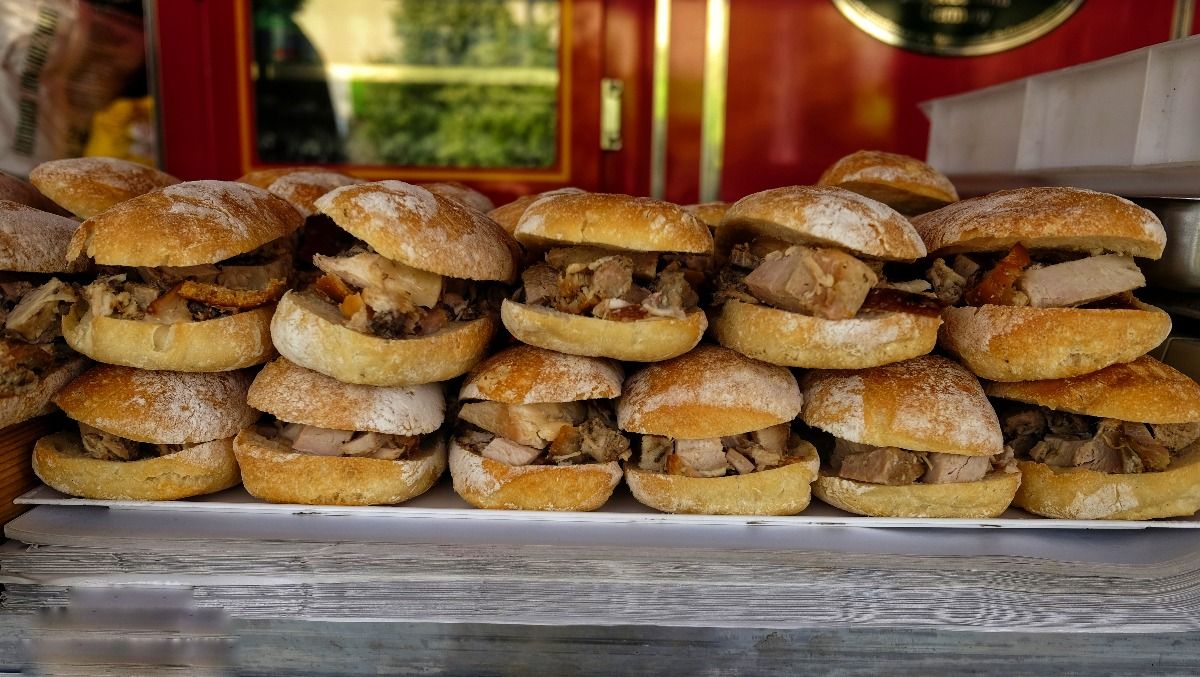 Perhaps one of my most formative food memories is the first time I bit into a porchetta sandwich at New York City's Porchetta restaurant. Helmed by the iconic Sara Jenkins, it's one of the best foods I've ever had — bar none.

The loud, almost jarringly brittle chicharon gave way to the toothsome baguette, sumptuously unctuous, lightly herbaceous pork . . . and that's it. No cheese, no aioli, nothing else to gussy up the experience — just expertly cooked, juicy pork, earth-shatteringly crisp crackling, and some high-quality bread. I was one word: astonished.

From then on — and until Porchetta permanently closed — I would hike over to the East Village every time I was in the city just to get myself a sandwich. One year, right before my birthday, I ordered 6 sandwiches, ate one, and took the rest home to freeze. As the smell of the sandwiches wafted and permeated the dank bus on my ride home, I knew that that birthday would be special.

A few years later, I walked from my then-office all the way over to Porsena — Jenkins' sit-down restaurant at the time — which was having a "porchetta pop-up" that week as an homage to the then-closed storefront. Only a day or two later, I took the same hike with a co-worker who shared my affinity for the unbelievably crisp skin and moist meat. For years, porchetta was the scent of my trip home. (This is a conversation for another day, but some of the sides at the original Porchetta were incredible, too. Those greens and potatoes . . .)

Porchetta, which hails from central Italy, has been an italian specialty for more than 2,000 years,  according to Tenderbelly. It's most commonly enjoyed as a sandwich or street food, but it can also be a truly noteworthy centerpiece for a special meal because it's a real knockout. Jenkins' recipe on Food52 notes that porchetta is traditionally made from a whole pig "or the loin wrapped in the belly."

While it doesn't require many ingredients, the preparation can be challenging. Many recipes call for skin-on pork belly or even sometimes pork shoulder. Fans swear by cooking it "low and slow" to ensure the pork fat renders properly and yields an impossibly crisp skin. It's important to score and tightly wrap the porchetta to allow for rendering and even cooking.

Porchetta — originally an Italian street food — was the sole aim of the beloved fast-casual store of the same name, which opened in 2008, according to Starchefs. Though the store branched out a bit — a la porchetta banh mi, porchetta cubanos, and porchetta taco — Jenkins said it was singularly focused on its namesake item in a 2014 interview with Eater. She also noted that porchetta requires garlic, rosemary, sage, and wild fennel pollen, as well as "good meat." The pork used at Porchetta was free-range antibiotic — "not commodity pork."

Fennel pollen might be porchetta's secret weapon; it's certainly not the most common pantry ingredient. The Kitchn notes that while it's derived from wild fennel, its flavor is very different from fennel or anise. It adds a beguiling, intriguing flavor to dishes, which Serious Eats describes as "notes of licorice, citrus, and handmade marshmallows."

I recently spoke with Chef Ariane Duarte, who was also introduced to the "fabulous" crispy, crackly, unctuous specialty through Jenkins' incredible iteration. The owner of New Jersey's Ariane Kitchen & Bar tried porchetta for the first time when Jenkins was cooking at Il Buco. She hadn't made it, and she thought that the Italian specialty seemed complicated. Through her work with the meat purveyor D'Artagnan, Duarte happened to receive some "beautiful" pork belly. She immediately knew what to do.

Duarte made porchetta with "lots of sage, bread crumbs, and garlic" and reported that the end result was "phenomenal." She finds that it makes a perfect Easter meal or an ideal end-of-summer dish. The ingredients are very straightforward, and once the meat is scored, stuffed, and rolled, you air dry it for a day or two in order to help advance the crackling of the skin. AKB actually sold the porchetta on its Easter 2021 menu with sweet potato and a "simple jus." While porchetta may at first seem intimidating, Duarte notes that it is actually anything but.

While Porchetta may be no more, Jenkins has since penned many cookbooks and now operates Nina June in Rockport, Me. If Porchetta were to reopen once more, you know who'd be first in line.

A 2008 New York Magazine review said, "Porchetta's porchetta is drop-dead delicious, abundantly juicy, aggressively seasoned, and varied in its myriad textures, from the moist fine-grained loin meat to the chewy fatty crackling, and the little melting baconlike bits that season the potatoes." That really about sums it all up.