Speak out: How "cultural silence" perpetuates the apathy towards and gaslighting of women's health

Salon spoke to author Maya Dusenbery about why few are decrying the abortion bans, despite the threats they pose 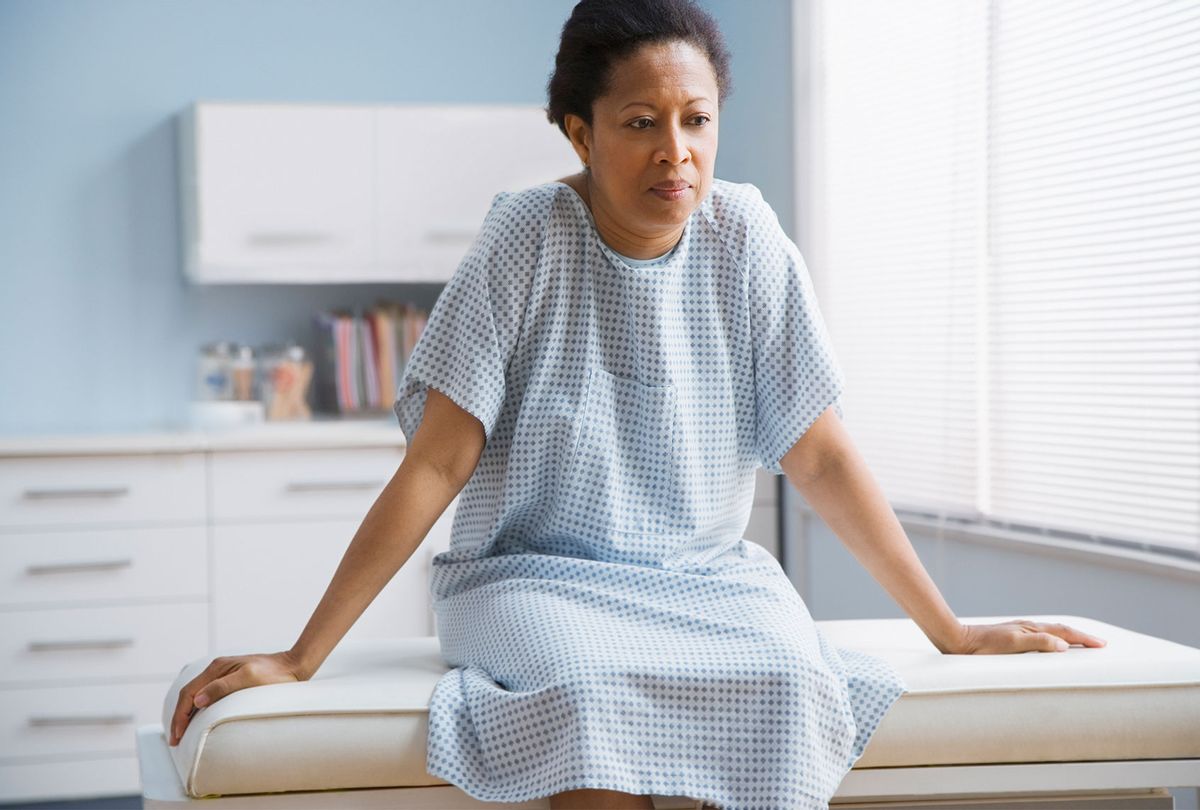 At the end of April, a report showed within four days, states across the country signed 28 abortion bans and restrictions into law, putting 2021 on track to see historic high numbers of abortion restrictions. Of course, you probably wouldn't know this unless you closely follow the social media accounts of groups like Planned Parenthood and other reproductive rights advocates. Dozens upon dozens of abortion restrictions and bans have passed in recent months, on top of the hundreds that are already on the books, and the upcoming Supreme Court case that could end legal abortion, yet it's barely even registering as a news story.

To Maya Dusenbery, journalist and author of "Doing Harm: The Truth About How Bad Medicine and Lazy Science Leave Women Dismissed, Misdiagnosed, and Sick," this level of cultural apathy is achingly familiar. In her 2018 book, Dusenbery writes about widespread erasure of women and pregnant people's pain and struggles in the medical system. This has made them vulnerable to higher maternal mortality and chronic illness rates, all while they're less likely to be diagnosed or get treatment and help than their male counterparts are. On the subject of double standards in what men and women are expected to endure, it was only a few years ago that a study of male hormonal birth control was canceled once male participants started to experience side effects that many women and pregnant-capable folks experience on the daily.

In many ways, ignoring women's pain in the medical system is mirrored by enduring cultural apathy and gaslighting in response to dehumanizing abortion legislation. For years, the frequent dismissal of crises surrounding abortion and reproductive health access because Roe v. Wade technically remains in place has taken us to the moment we're in — one where almost no one outside of advocacy spaces is outraged by dozens of abortion restrictions passing within days, all while pregnancy and birth-related deaths and complications, especially for women of color, continue to soar.

Salon spoke with Dusenbery about how the consequences of this apathy, in our politics and the health system, are staggering, and how they're interconnected.

What were some of the most surprising or important revelations of your research for "Doing Harm"?

There are really these two big problems that are impacting women's health care. One, there's just a knowledge gap. There's a lack of knowledge about women's bodies, symptoms and conditions that disproportionately impact us. Secondly, there's what I call the "trust gap," this tendency to dismiss or normalize and psychologize women's reports of their symptoms. This has its roots way, way, back in medical history and the concept of hysteria, but is really still alive and well today.

What was really striking was the way those two gaps are mutually reinforcing, so one feeds into another, and the less we know about women's health and bodies, the more that medicine tries to fill in those gaps by dismissing women's symptoms as all in their head. If we can rely on that long-standing stereotype about women, then that means we don't actually invest in the scientific research that's needed to really understand more about women's bodies and health.

Do you see parallels between the lack of attention that's paid to dangerous abortion laws, and ignoring women's pain and conditions in the medical system? Why or why not?

Absolutely. When I first became interested in this topic, it was because I was diagnosed with an autoimmune disease, and I got really interested in learning about autoimmune diseases which disproportionately affect women. Yet, there isn't a lot of public awareness about this epidemic of chronic illnesses, and within the medical system, a lot of autoimmune patients experience these long diagnostic delays, and are often told during that time by providers that they're just chronic complainers, they're just stressed, or overly concerned with their health.

When I started hearing stories like that from women, at first I thought it was part of this much broader tendency in the culture to just not grant women's voices with the same authority we grant men's. In a range of contexts, that's certainly the case — there's an additional burden on women to prove they know what they're talking about in the workplace, or their account of the world is accurate. To some extent, that trust gap in medicine is absolutely reflective of that larger tendency to not believe women.

Another really big area where that problem arises is in the world of reproductive health, especially around abortion, in the tendency to not trust women's own reports about when they need an abortion. We see all of these restrictions that are rooted in this very patronizing idea that women need waiting periods, or ultrasound laws, because they don't actually grasp the decision that they're making.

In terms of cultural apathy, one of the parallels I really see is in the stigma around abortion, and how that's really entangled with the silence around it. It's hard for women to talk about their experience with having abortions because there's the stigma, and in turn, that reinforces the stigma because people may not know that everyone loves and knows someone who's had an abortion. That's a big way the anti-choice movement has been able to have such success, because of the difficulty in telling these stories.

So many of the women I interviewed for the book about their experiences talked about feeling like they were dismissed, or gaslit, and it wasn't until they started hearing the stories of other women that they put together this was a cultural problem that was really widespread. When it comes to abortion, and gender bias in medicine broadly, there's a lot of potential power in women telling stories and breaking silence about these things. Because in both cases, that cultural silence is a big part of the problem, and one reason we don't appreciate how these restrictions impact so many people is we're not hearing enough about the people they're impacting, or how much women are being gaslit and dismissed since we're not telling those stories enough.

What are the consequences of ignoring women and pregnant people's struggles, whether that's ignoring political attacks on them, or medical conditions they face?

When it comes to dismissing women's reports of their symptoms and pain, we see the consequences in the fact that women tend to have longer diagnostic delays compared to men for a wide range of conditions. For more chronic problems, that can mean months or even years of searching for what's going on, which is stressful, costly and can impact the prognosis. And of course, for more immediately life-threatening things like heart attacks and strokes, that can be the difference between life and death.

More broadly, even for women who do get a diagnosis and don't have those very traumatic experiences, there's an insidious way that dismissal can make you start to second-guess yourself, start questioning your own trust in what your body is telling you, and wondering if it is just stress, or all in your head. That has really far-ranging impacts on women and undermines a lot of women's trust in the medical system, which impacts their likelihood of seeking care when they need it, or not feeling like they can really trust the advice they get.

On the abortion front, it's the same thing — the delays in getting an abortion due to needless restrictions can impact women's health, finances and the entire trajectory of their lives. The famous Turnaway Study really shows how consequential the impact of being denied an abortion when you want it can be.

"Doing Harm" came out in 2018 — what's changed and what's stayed the same in the political landscape around women's health and reproductive health since then?

It's been quite a long time now, which is crazy! One of the things that feels like it's changed since the book came out is, at the time, it didn't really feel like there were that many people talking about gender bias in the medical system as a feminist issue. I don't think it really was on the radar like it is now, thanks in part not just to my book but a whole slew of other books from that time, and the years since, that have documented these problems with data or memoirs that have really illustrated the consequences for individual women. It's just something that's talked about more, in media and social media.

The pandemic has also really been an opportunity to put a spotlight on a lot of these problems, because the last year, people have been so focused on health and the medical system in a way that's unprecedented. We've been able to see things like the ways pregnant women are treated in the medical system, the way women and all patients with chronic illnesses have been dismissed. It's also provided this opportunity to spotlight the fact diseases can affect men and women differently — so, with COVID, from the beginning it was clear there was a gender difference in who was getting severely ill, and the need to account for that in studies on treatment and during the vaccine development.

Most recently, on that front, we're seeing reports of people with menstrual symptoms after getting the vaccine, and how that wasn't recognized by researchers until women anecdotally started reporting these things. That's a reminder that so consistently, women's symptoms and side effects haven't been front and center in researchers' minds. So this has presented the opportunity to point out this is a bigger problem, that women have been underrepresented in a lot of research. Ultimately, all of that will hopefully be a good thing in terms of raising awareness about all these problems.

In both cases, I believe in the power of women's stories to make people aware of both the problems and the real impacts they have on individuals in an immediate and visceral way. The more we can put that human face to these abstract policy questions is key.

On the dismissal of women in medicine, a big part of the problem is doctors don't get the feedback they need to be getting on their diagnostic errors, more so than malice or conscious sexist beliefs. A lot is, when women see a doctor or multiple doctors before being properly diagnosed, those doctors that she saw don't get the memo about what she actually had. That helps perpetuate the problem.

For those doctors who told her it's just stress, or maybe you're depressed, they don't find out she eventually had an autoimmune disease, they'll continue to have that stereotype about women. That's just a reason it's so important for us to tell those stories, broadly to our friends and social media and doctors, to say, "Hey, you dismissed me, and you were wrong." Because I think a big part of the problem is they don't know they got it wrong.