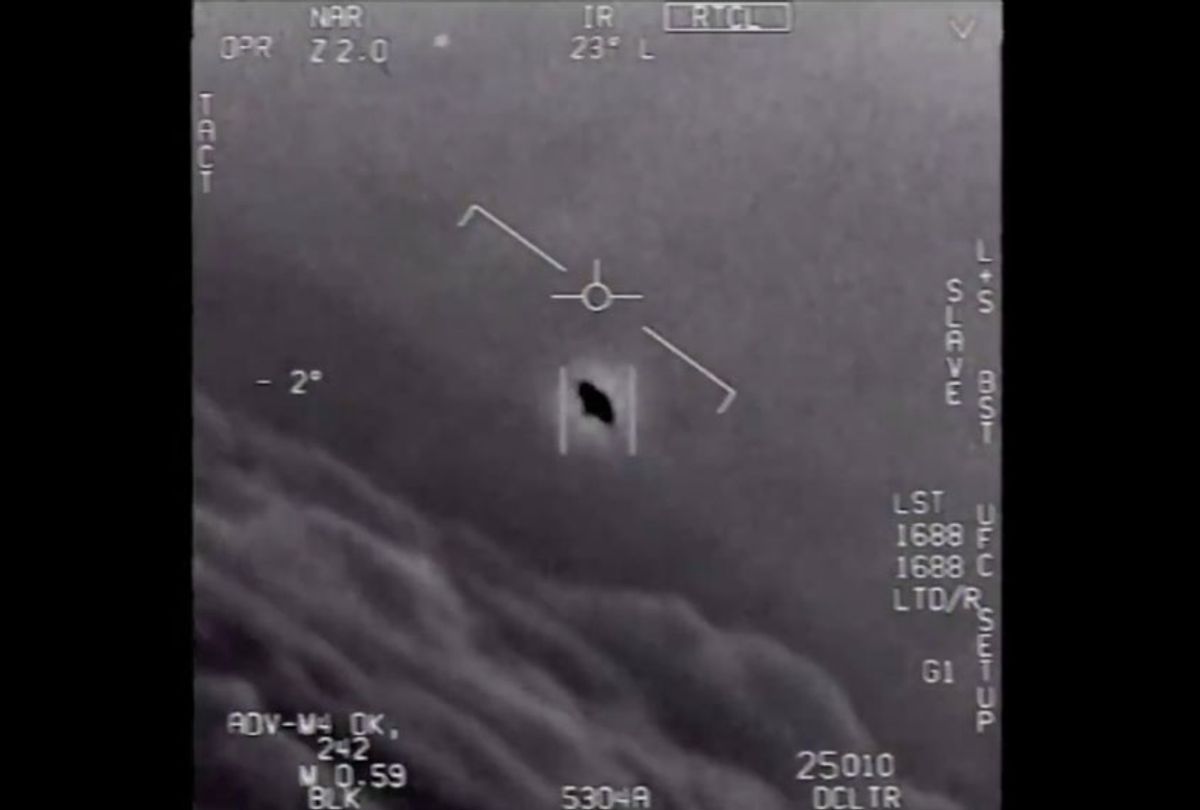 U.S. intelligence officials reportedly found no evidence that the UFOs witnessed by Navy pilots in recent years were extraterrestrial in origin, though questions still remain about where the aircraft originated and how they appear to defy known laws of physics.

The overwhelming majority of unidentified aircraft seen by various military personnel were not related to any known U.S. government projects, the New York Times reported, citing senior officials who had reviewed a classified report acknowledging the sightings. The admission marks a sharp departure from the Pentagon's previous attempts to stifle dialogue into the string of unexplained incidents.

The report, a declassified version of which is expected to be released to Congress later this month, details a total of over 120 sightings — many of which involve incomprehensible aircraft movements. In one instance, Navy pilots caught sight of an aircraft that looked like a spinning top hovering 30,000 feet high in the East Coast. The pilots claimed that the object, which could reach hypersonic speeds, had no identifiable source of propulsion.

In another, detailed in a recently leaked Navy video recorded in 2019, an unidentified object was seen flying above the water before vanishing into the ocean.

Perhaps the most striking sighting occurred back in 2004, when two former Navy pilots were dispatched to investigate "multiple anomalous aerial vehicles" off the coast of San Diego that plummeted 80,000 feet in less than a second. "It accelerated like nothing I've ever seen," Commander David Fravor, who saw the vehicles, told the Times.

Christopher Mellon, former Deputy Assistant Secretary of Defense for Intelligence in the Clinton and George W. Bush administrations, said in an interview with NBC News that there was "a lot of continuity" between recent sightings and those of the past.

"What we're seeing are a number of distinct and different things," Mellon explained. "Sometimes we're seeing a 50-foot object that can travel at hypersonic speeds and seemingly go into orbit or come down from altitudes of potentially above 100,000 feet."

One official told the Times that some of the sightings could be attributed to Russian or Chinese military projects. Both countries have reportedly invested heavily in hypersonic technology — though the existence of such aircraft would suggest that their technology is far superior to anything the U.S. has developed in the field.

While the Pentagon has generally stayed mum on UFO sightings until quite recently, it has quietly been studying the phenomena for over a decade. Back in 2007 the Pentagon established the Advanced Aerospace Threat Identification Program, a project spearheaded by then-Sen. Harry Reid that reviewed unexplained radar data and video footage taken by Navy pilots and senior military officers.

The program shuttered in 2012 due to underfunding, though it was partially resurrected in 2017 under the auspices of a private group, called "To the Stars Academy," co-founded by Tom DeLonge, the guitarist for pop-punk band Blink-182.

Pentagon watchers also believe that deep in the military bureaucracy something similar to the AATIP program may still exist today, albeit in a more informal manner.