Exotic was a known racist, misogynist, and abusive boss. Why are we still extending his fame with new projects? 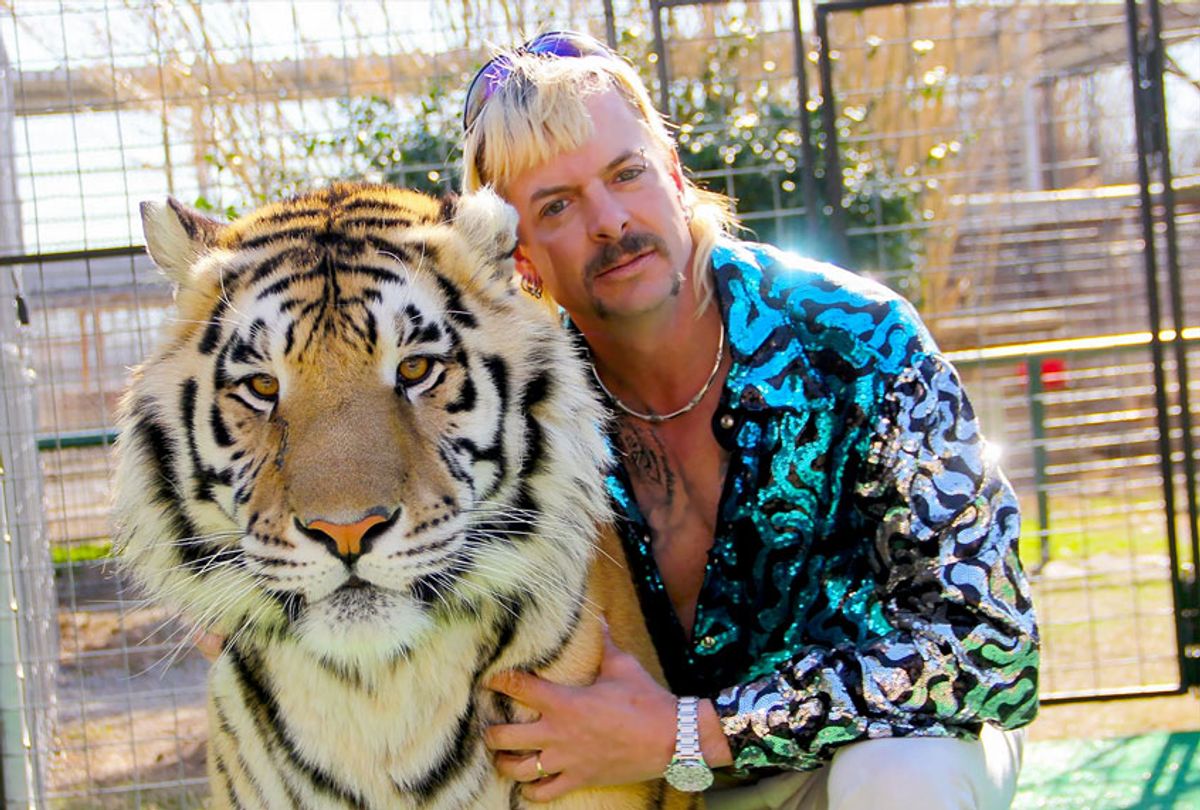 A year after its aggressive 15 minutes of fame at the beginning of the pandemic, Netflix docuseries "Tiger King" is making a comeback, although it's not exactly clear who's asking for it. This week, Deadline reported new casting announcements for the Peacock series adaptation of the events depicted in "Tiger King," and discussed throughout the "Joe Exotic" podcast on Wondery.

So far, the Peacock show in development will star John Cameron Mitchell as Joe Exotic himself along with Kate McKinnon as Carole Baskin, Exotic's cat-sanctuary-owning "nemesis" whom Exotic accuses of killing her ex-husband — and plots to kill, himself. Joining in the fun (?) are Nat Wolff as Travis Maldonado, one of Exotic's husbands; Sam Keely as John Finlay, another of Exotic's husbands; most recently, Dennis Quaid as reporter Rick Kirkham; and others. McKinnon will also serve as an executive producer of the Peacock series.

And this is just one show in development to tell the story of Exotic's wild life as an Oklahoma zoo owner and prolific tiger breeder, who also gets caught up in a number of crimes and conspiracies that landed him in prison in 2018. CBS Television Studios is also developing a series with Nicholas Cage to play Exotic, according to Variety.

The resurgence of Joe Exotic's story is frustrating and annoying for a number of reasons, not the least of which include that we've all moved on from it already, and are exhausted by the entertainment industry's obsession with trying to profit off the same, tired stories repeatedly. Then, of course, there's the fact that Joe Exotic isn't exactly a character worth coming back to, despite the sanitized Netflix portrayal of him. Exotic was, actually, an exploitative man who tried to have a woman killed, and is wildly racist by all accounts, treated as a sympathetic and goofy meme because of white privilege.

Rebecca Chaiklin, the creator of the show, told The Hollywood Reporter last year that Exotic "said things when we were filming that were very unsettling," including a rant questioning why he couldn't say the N-word, which didn't make it into the show. In fact, much of Exotic's racist tirades didn't make it, because according to Chaiklin, "They didn't have a context in the story." In the same interview, she says, "Joe is a racist, I would say categorically." And yet, somehow, this was deemed not relevant to a show about him and his life. Instead, the show's creators deemed Exotic's conspiracy theory that Baskin had killed her husband, without any evidence, worthy of extensive amounts of screentime.

Eric Goode, a co-director of "Tiger King," told the Hollywood Reporter, "We had empathy for Joe, but Joe did a lot of horrible things. Joe committed some really serious crimes and Joe was not only cruel and inhumane to his animals, he was cruel to the people around him." Goode added, "I think it's very important for people to understand that Joe is an actor and he tells people what they want to hear." In other words, Exotic wanted to be liked — and the show's creators hid the worst parts of him and made that possible.

Joe Exotic wasn't just an animal abuser, an unapologetic racist, and violent misogynist. He also reportedly and unsurprisingly wasn't a great boss, paying workers less than $150 a week for more than 40 hours of work, according to one former worker who held a Reddit AMA on his experience last year. Most of Exotic's employees lived in rundown trailers and often had to eat expired meat that was meant to feed the tigers, the former worker said.

Despite all of these inexcusable behaviors, throughout the nation's brief, collective obsession with "Tiger King," the Netflix series led many to find Exotic quirky, sympathetic, likable — a meme more so than an attempted killer. The power of viral shows and media to rehabilitate unsafe people in the cultural consciousness is dangerous and inexcusable. Yet, with even more Joe Exotic projects on the horizon, he'll have even more chances at undeserved cultural rehabilitation.

As any reality show watcher can attest to, what we see on screens isn't always the truth — more often than not, it isn't. And as Chaiklin told the Hollywood Reporter, if the truth doesn't "have a context in the story" (AKA, the warped narrative show creators want to project), then you won't be seeing it.