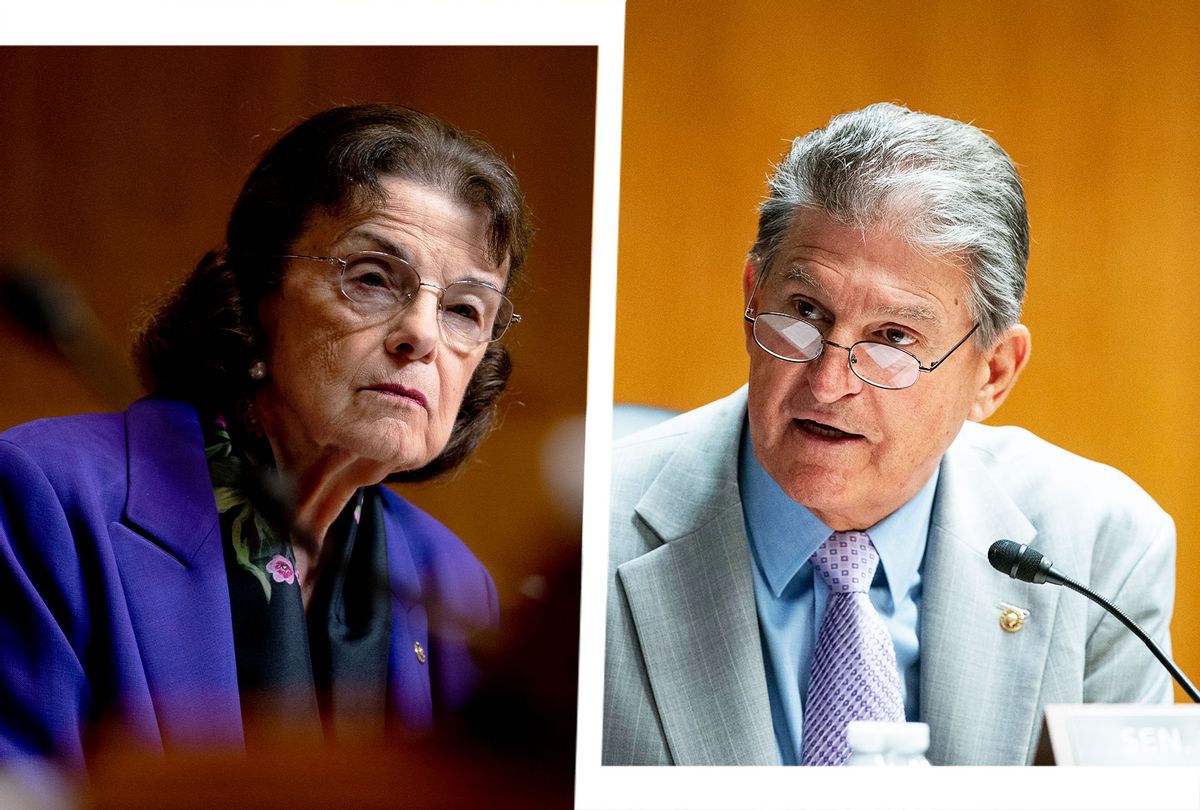 Sen. Dianne Feinstein, D-Calif., drew calls from progressives to resign this week after she rejected Democratic calls to reform the filibuster to pass voting rights legislation amid a Republican push to restrict ballot access that the party has likened to "Jim Crow."

Sens. Joe Manchin D-W.Va., and Kyrsten Sinema, D-Ariz., have drawn intraparty scorn over their defense of the filibuster as numerous other centrist Democrats have softened their opposition to reforming the Senate rule in the face of Republican obstruction and assault on voting rights.

Sen. Angus King, I-Maine, who has defended the filibuster, said this week that if it comes down to a choice between the archaic Senate rule and democracy, he would "choose democracy." Asked about the comment on Thursday, however, Feinstein denied that democracy was in peril despite Republicans voting to block the certification of last year's presidential election and GOP legislators in more than a dozen states passing new voting restrictions and, more importantly, laws that would make it easier to overturn elections.

"If democracy were in jeopardy, I would want to protect it," Feinstein told Forbes' Andrew Solender. "But I don't see it being in jeopardy right now."

Feinstein said she would "wait and see what happens" with the For the People Act, a sweeping voting rights bill that every Senate Republican and Manchin have opposed (Manchin previously co-sponsored the bill in 2019). Asked what reforms she might support, Feinstein said, "I'd have to take a look" but "right now, nothing comes to my mind."

Rick Hasen, a law professor at the University of California-Irvine who has tracked many of the hundreds of voting restrictions pushed by Republicans this year, said Feinstein's denial that democracy was in danger left him "speechless."

"A minority Party that has shown no respect for democratic norms has made a mockery of the Senate and majoritarianism," tweeted Anthony Michael Kreis, a law professor at the University of Georgia. "Senator Feinstein is still trying to govern like it's the 1990s."

"A truly baffling quote," said Sawyer Hackett, the executive director of the progressive People First Future, a group founded by former presidential candidate Julian Castro. "If Diane Feinstein isn't able to recognize the attacks on our democracy and the rise of fascism she needs to get hell out of the Senate."

Feinstein has defended the filibuster in the past but her renewed defense as Democrats push to advance voting rights legislation highlights that opposition to filibuster reform inside the party is bigger than just Manchin and Sinema, who have been on the receiving end of progressive criticism for months.

"There are certainly more senators with reservations about the filibuster that are giving Manchin steam to stay firm," Rep. Alexandria Ocasio-Cortez, D-N.Y., told The Daily Beast. "But I have also heard from colleagues that none of those other senators want to play Manchin's role."

But so far, other centrist Democrats have equivocated on whether they would support reforming the filibuster to pass voting rights.

Sen. Mark Kelly, D-Ariz., who was elected in a special election last year and will face voters again next year, told CNN this week that he would "evaluate any change to our rules, regardless of what they are, based on what's in the best interest of Arizona, and the best interest of our country."

Sen. Maggie Hassan, D-N.H., a top target for Republicans in next year's midterms, has expressed "concerns" about eliminating the filibuster though she has supported reforming the rule in the past. Sen. Catherine Cortez Masto, D-Nev, another top GOP target, has supported bringing back the "talking filibuster" to make it more difficult to block legislation, a proposal Manchin has floated in the past. Sen. Tom Carper, D-Del., who voted with Manchin and other centrists to oppose a $15 minimum wage increase earlier this year, has stayed quiet on the issue.

Others, like King, have said they would be open to reform in the interest of advancing voting rights.

Sen. Jacky Rosen, D-Nev, has opposed eliminating the filibuster but told The Washington Post this week she would support such a move "in the case of protecting democracy." Sen. Jon Tester, D-Montana, opened the door to backing filibuster reform in an interview with MSNBC this week over concerns that it has been "weaponized," but he told CNN that he was not there yet. Sen. Chris Coons, D-Del., a longtime ally of President Joe Biden and opponent of filibuster reform, similarly told Politico that the filibuster may have to go if Republicans continue to block the president's agenda.

Former Sen. Claire McCaskill, D-Mo., described Manchin as a "heat shield" for other Democrats reluctant to eliminate the filibuster. But the other Democrats' reluctance to publicly back Manchin's stance means that they are likely to fall in line if Manchin folds, Ocasio-Cortez told The Daily Beast.

"That doesn't mean they shouldn't be pressed for their position and offer clarity to their constituents, though," she added. "People deserve to know with clarity where their elected representation stands on the filibuster."