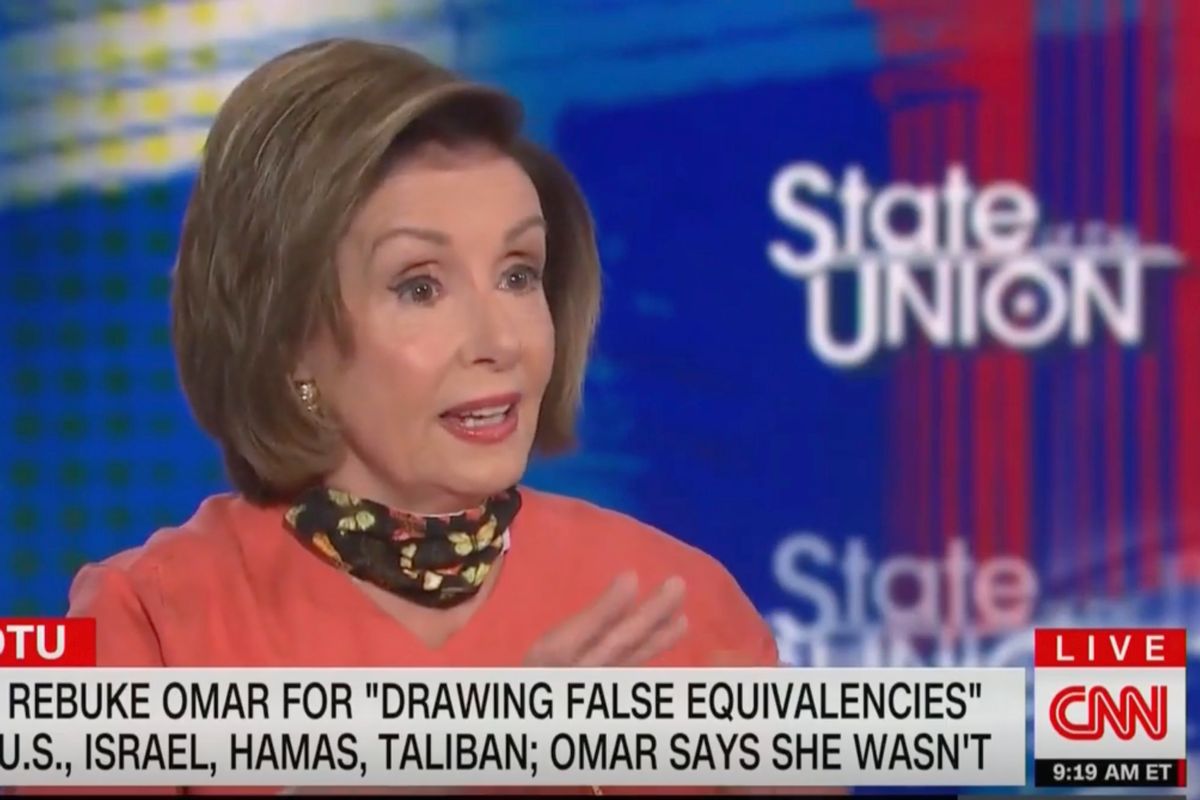 House Speaker Nancy Pelosi during an appearance on CNN's State of the Union. (CNN)
--

House Speaker Nancy Pelosi backtracked her criticism of fellow Rep. Ilhan Omar, D-Minn., during an interview on CNN Sunday — just minutes before Rep. Alexandria Ocasio-Cortez, D-NY, appeared on the same show to blast Pelosi and her colleagues for amplifying the "right-wing vitriol" focused on Omar.

The growing intra-party rift started with a tweet last week from Omar, which said, "We must have the same level of accountability and justice for all victims of crimes against humanity. We have seen unthinkable atrocities committed by the U.S., Hamas, Israel, Afghanistan, and the Taliban."

The comment sparked fierce backlash on both sides of the aisle, with many taking offense to any comparison between the U.S. and Israel to the two terrorist groups. A bipartisan group of 12 Jewish Congresspeople first released a statement saying the tweet was "as offensive as it is misguided," before Pelosi and House Democratic leaders piled on with a rare statement of their own.

"Drawing false equivalencies between democracies like the U.S. and Israel and groups that engage in terrorism like Hamas and the Taliban foments prejudice and undermines progress toward a future of peace and security for all," the statement read.

But several of Omar's Democratic colleagues also rushed to her defense, including AOC, who said the comment was taken out of context. She also pointed out that the tweet came in the form of a question to State Anthony Blinken, to discuss methods of recourse for innocent victims of Israeli and Afghan government violence.

The Minnesota Democrat later clarified the remarks, saying she was in "no way equating terrorist organizations with democratic countries with well-established judicial systems."

Pelosi thanked her for the statement and later told CNN's Dana Bash during an interview on the network's Sunday morning show, "State of the Union," that she considered the incident to be over.

But later in the segment during a separate interview with Ocasio-Cortez, it became clear that the subject was still raw for progressive representatives, who have borne the brunt of recent right-wing criticism and threats since the Jan. 6 Capitol attack.

"This whole hubbub started with right-wing news outlets taking what [Omar] said out of context," Ocasio-Cortez told Bash. "And when we feed into that, it adds legitimacy to a lot of this kind of right wing vitriol. It absolutely kind of increases that target. And as someone who has experienced that, you know, it's very difficult to communicate the scale and how dangerous that is."