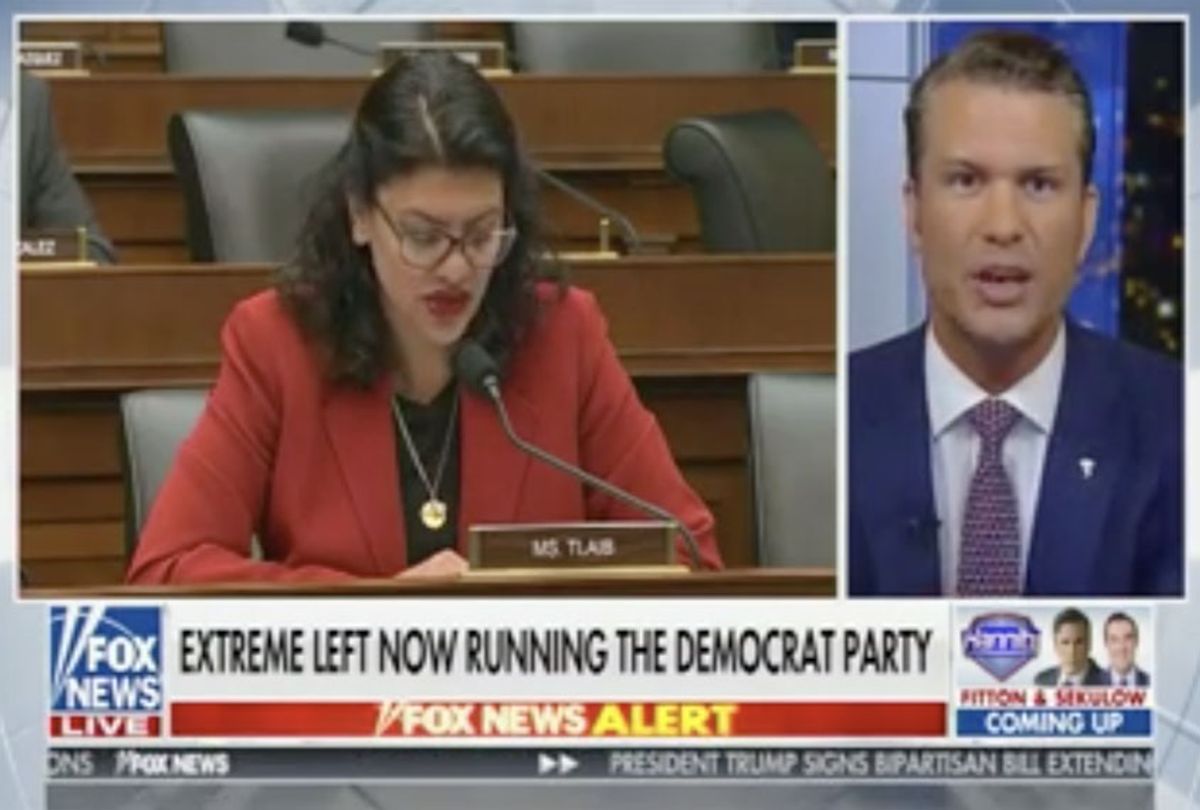 Fellow Fox News colleague Sean Hannity began a segment of his eponymous primetime show Monday by denouncing the so-called "squad" of four liberal Democratic congresswomen, which in addition to Tlaib includes Reps. Alexandria Ocasio-Cortez of New York, Ilhan Omar of Minnesota and Ayanna Pressley of Massachusetts. The group has recently found itself the target of racist Twitter attacks from President Donald Trump.

"Nobody in the Democratic team of hopefuls for 2020 is talking about Nancy Pelosi's policies," Hannity told his viewers. "They're adopting 'the squad's' policies."

Hannity continued by engaging his colleague Hegseth over the accusations of "radicalism" and "virulent anti-Semitism" he levied against "the squad" earlier in the segment.

"Pete: To me they're going to help in the end, because it seems like everybody is afraid of them. And they're so radical and so extreme, and frankly a number of them are quite bigoted," Hannity told Hegseth. "And I don't think it's going to work very well to call America a garbage country; or compare the concentration camps in Nazi Germany to the treatment we're giving people in facilities down at the border; or to say that Israel has hypnotized the world, and we want to boycott Israel just the way we boycotted the Nazis. I don't think that's going to fly."

"No, and it exposes the real agenda of today's modern left," Hegseth replied. "I mean, if you look at what Rashida Tlaib talked about President Trump having a 'hate agenda.' I can then, therefore, look at her and say that she has a 'Hamas agenda.' If you look at — she was — in June of this year, she criticized the New York Times, because they, in her mind, favored Israel when Hamas was launching rockets from the Gaza Strip, and she said it didn't reflect well enough on the Palestinians in the Gaza Strip. And we know it's controlled by Hamas. So, if she wants to throw around labels, we can, too."

Hannity concluded the segment by bemoaning the seemingly unstoppable power of "the squad."

"I don't think that Democrats can stop 'the squad,'" he said. "I think they will be the voice of the Democratic Party."

"No, the squad is the future," Hegseth responded. "The squad is what their educational institutions have created. It's the future for Democrats."

Tlaib, who has received death threats as a result of right-wing criticisms, was one of the legislators targeted by Trump earlier this month in a series of tweets that were universally criticized as racist.

"So interesting to see 'Progressive' Democrat Congresswomen, who originally came from countries whose governments are a complete and total catastrophe, the worst, most corrupt and inept anywhere in the world (if they even have a functioning government at all), now loudly and viciously telling the people of the United States, the greatest and most powerful Nation on earth, how our government is to be run," Trump wrote in a series of tweets at the time. "Why don’t they go back and help fix the totally broken and crime infested places from which they came. Then come back and show us how it is done. These places need your help badly, you can’t leave fast enough. I’m sure that Nancy Pelosi would be very happy to quickly work out free travel arrangements!"

You can watch the full "Hannity" segment below via Media Matters: