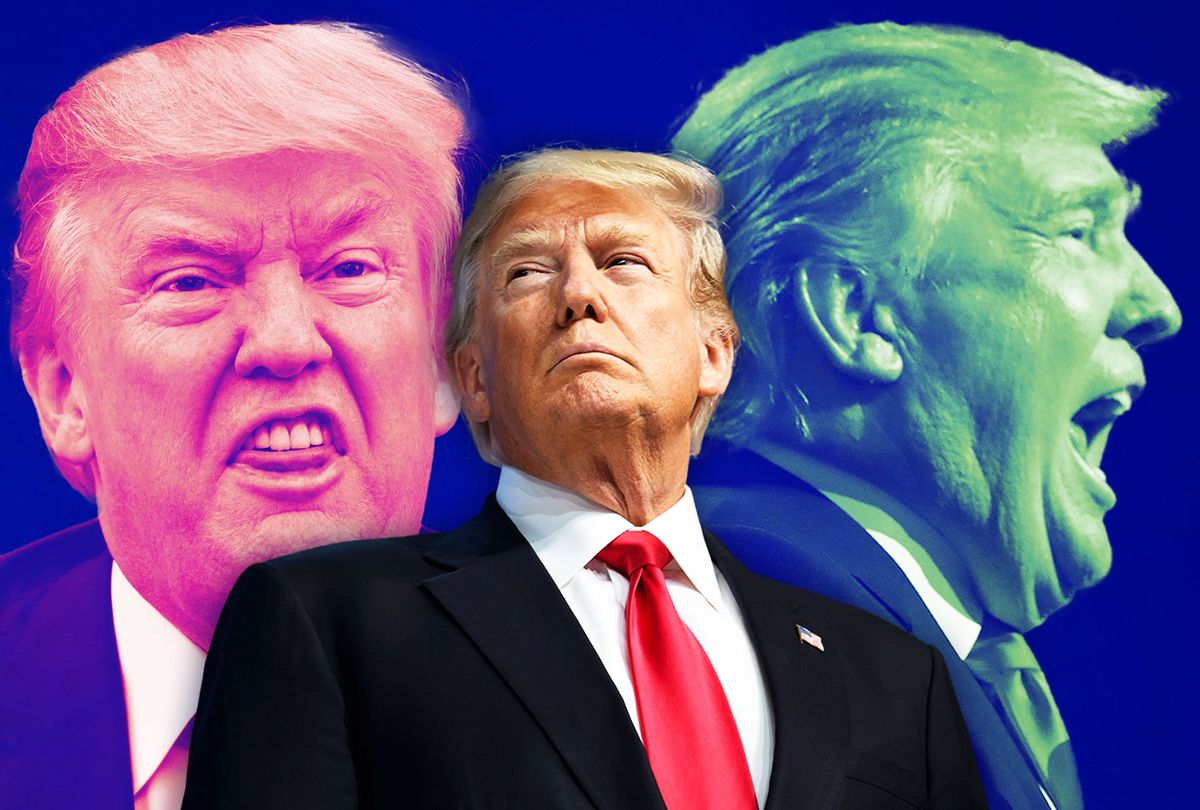 For at least the past five years, some of America's and the world's foremost mental health experts have attempted to warn the public that Donald Trump was (and is) a dire threat to public safety.

Based on Trump's public behavior and other available information, these experts warned that he appears to be a malignant narcissist, a pathological liar who is obsessed with violence, easily manipulated by praise and other ego-stroking behavior, indifferent to the suffering of other human beings, anti-social and anti-human in his values and behavior, irresponsible and impulsive and in total quite likely a sociopath or perhaps a psychopath.

Collectively, these mental health experts predicted that Trump's many apparent pathologies would lead to destruction and suffering for the American people and the world.

They were almost entirely correct: Donald Trump undermined and destabilized American society and democracy. He made negligent and irresponsible choices, bordering on outright sabotage, in response to the coronavirus pandemic. These choices may have killed hundreds of thousands of Americans and shortened the average lifespan of the American people by several years. He colluded with a hostile foreign power to subvert a presidential election. He attempted a coup which included an attack by his followers on the U.S. Capitol. He very nearly destroyed the American economy and presided over a regime of profound corruption. He inspired and encouraged right-wing terrorism and other political violence. He leads a political cult. He was impeached twice — which is unprecedented in American history — for his various crimes against the Constitution and the country.

Instead of being publicly praised and rewarded for their truth-telling and their attempts to warn America and the world, many of these mental health professionals have endured death threats and other retaliation. At least one of these truth-tellers, psychiatrist Dr. Bandy X. Lee — editor of "The Dangerous Case of Donald Trump" — lost her position at an elite university, in large part because she continued to warn the public about Donald Trump and his movement's escalating danger to public safety.

Many Americans, including the country's political elites, would prefer to throw the Age of Trump down the memory well. But such acts of organized forgetting will not save them from the Trump-controlled Republican Party's escalating assaults on American democracy. Forgetting that mental health professionals predicted the Trump nightmare and all it has wrought is an integral part of this campaign of national amnesia.

Most importantly, Donald Trump is incapable of letting America or the world forget about him. Trump's apparent mental pathologies drive him to seek revenge against his perceived enemies and others he believes have wronged him.

To that end, Trump still appears to be hatching half-baked schemes to remove Joe Biden from the presidency, even flirting with promises by his allies that he will somehow be "reinstated" as president later this year. Trump's followers, who comprise at least half of all Republican voters, have been convinced that he is still the legitimate president and that Biden is a usurper. Christian fascists and antisemitic QAnon conspiracy believers (two groups that overlap extensively) are among Trump's most ardent supporters.

Mental health professionals predicted such an outcome as well. They understand that Trumpism was not an acute disease that would magically disappear once Donald Trump was no longer president. Instead, Trumpism is a potentially lethal, chronic and long-lasting disease of the nation's mind, body and spirit.

In an effort to assess Donald Trump's continuing danger to American society and democracy, I recently spoke with Dr. Lance Dodes, whom I have interviewed on numerous occasions. Dodes is a retired assistant clinical professor of psychiatry at Harvard Medical School and a training and supervising analyst emeritus at the Boston Psychoanalytic Society and Institute. He is among the foremost voices who attempted to warn the American people and the world about Donald Trump's dangerous behavior.

In this conversation, Dodes warns that Donald Trump appears to be a psychopath and that his dangerous behavior will only get worse. He argues that Trump's delusional beliefs fuel the Republican Party's detachment from reality, as shown through the Big Lie, conspiratorial thinking, the right-wing propaganda media and other anti-democratic beliefs and behavior. At the end of this conversation, Dodes once again expresses the view that Donald Trump believes himself to be a type of god, and that if he somehow returns to power may actually try to create an authoritarian police state.

This conversation has been edited, as usual, for length and clarity.

Are Trump's followers addicted to him? What would withdrawal look like for them and the country as a whole?

I don't like to use the word "addiction" because it has a particular meaning. I would describe Trump's most extreme devotees as members of a charismatic cult. Such cults unconditionally worship a charismatic leader who is often delusional with a grandiose, psychotic belief in his perfection, like Trump. The followers close themselves off from accurate or rational information in order to protect their connection to the godlike cult leader and to avoid questioning his delusional views, which would cause them to be shunned or expelled from the group.

What would an intervention look like for these people? You cannot help people become healthy and well if they do not want to. I fear America will be sick with Trumpism for a long time.

Trump's followers don't believe they need any help. Having been conned into the leader's delusion of being a god, they believe that so long as they are following his perfect lead they could not possibly be wrong. It's important to be clear, though, that this description of Trump's most rabid followers likely does not apply to the Republicans in Congress who support Trump. Rather than being members of the Trump cult, they likely simply lack a decent conscience, immorally protecting their seats in Congress rather than the country or democracy.

From the Big Lie to the QAnon conspiracy theory to lies and disinformation more generally, Republicans and Trumpists believe things that are demonstrably not true and literally outside of existing reality. Is this a public mental health emergency?

It certainly is a public mental health emergency, and one that has occurred many times in human history. Followers adopt the belief system of a populist tyrant which becomes the new permitted reality, spreading to others who are swept up by their need to be included. That belief system, however fantastical or delusional, remains accepted truth until it is finally shown to be false. Those who have been conned into believing the tyrant's lies find comfort in their conviction that they know the truth, enabling them to feel superior to doubters.

There are all these stories about Trump wandering around Mar-a-Lago, going to people's weddings and giving speeches where he airs his grievances and shares lies and conspiracy theories about how he was betrayed and so on. He continues to rage at his "enemies" and to be gripped by paranoia and out of touch with reality more generally. What do you see in his behavior?

If there is someone who is ranting and raving about things that are obviously and demonstrably false yet insists that they are true, that is by definition delusional. If Trump were not a former president, he would be easily seen to be psychotic. Because he is a former president and has a cult following, we are expected to wonder if his behavior can be explained some other way.

Can you elaborate more on your observation that Trump is behaving as though he were psychotic?

He has been delusional for years, from the start of his presidency, when he claimed he had large crowds at his inauguration. But it's important to add that beside being delusional, Trump's behavior also reflects his deeply severe character disorder, his sociopathy. A person, after all, can be delusional and no danger whatsoever to anyone else. But the fact that Trump is a sociopath, a person without a conscience who is incapable of recognizing the inherent worth of other human beings, makes him the enormous danger he is. Trump has the worst of all worlds, one might say, psychotically grandiose and utterly uncaring about the harm he causes others. He is basically psychologically the same as the many infamous, cruel tyrants we know from recent and remote history.

Could Donald Trump's children or other members of his inner circle force him to get medical help?

Unfortunately, Trump's psychosis is not the type treatable with medication, and the severity of his character disorder means he would never be capable of engaging in introspection.

Donald Trump clearly needs narcissistic fuel from his followers and other sources of attention. What does such a need do to a person's mind? And what happens when they are denied it?

If Trump is charged and arrested for his alleged crimes and his base of support crumbles, he could not accept going to jail. He would be more likely to flee the country, perhaps buy himself a remote island that is controlled by a friendly dictator and declare himself king.

You and other mental health professionals spent years warning the American people and the world about Trump's apparent mental pathologies and the danger he represented. Almost all of your predictions came true. As a thought experiment, what would America now look like if those warnings had been heeded and then acted upon?

Trump would not have been elected president. If elected, he would have been quickly removed from office as a clear danger to the nation and to democracy.

What would happen if Donald Trump somehow became president again or otherwise assumed a position of national power?

Trump has already told us what he would do. When he was running against Hillary Clinton, he said that he wanted to "lock her up" in prison. That's what Trump would try to do if he were back in power. He seeks to be the same as the leader of North Korea, imprisoning or killing people if they dare to oppose him. With more power he is only going to get worse — more enraged, more paranoid, more psychotic, more violent and more dangerous. If he could, Donald Trump would turn America into a police state.