The mythologizing of Jan. 6: From Fox News' whining to Ashli Babbitt's "martyrdom" 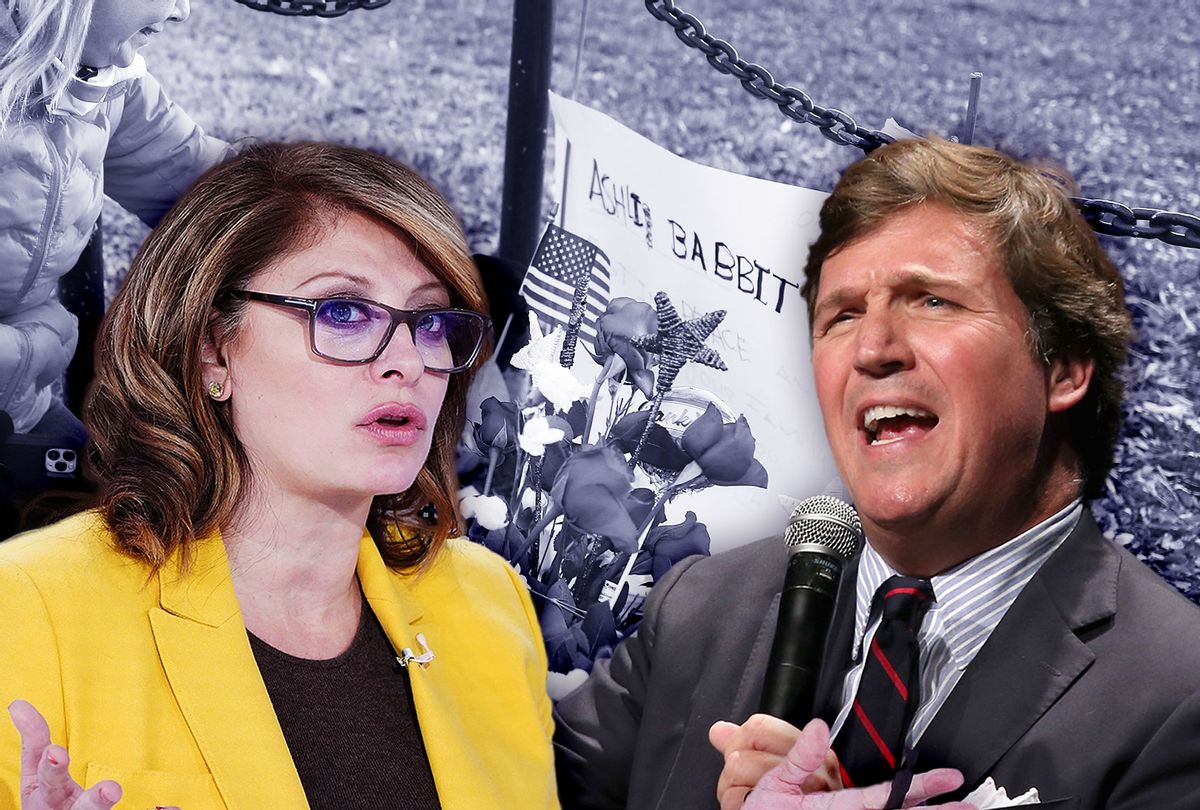 Tucker Carlson, whose nightly prime time show on Fox News draws millions of viewers, used his massive platform to preposterously claim he's being silenced. This time the "silencing" was over his recent floating of a flat-out silly conspiracy theory that the FBI was behind the January 6 insurrection.

"'You can't say that,' they screamed, 'that's not allowed!'" he accused others of saying, when in reality, the tenor of the criticism was closer to "that's utter nonsense" and "Tucker Carlson is a lying POS." The Fox News host held out the fact-checking, mockery, and other debunking as evidence for his conspiracy theory, accusing those who insist on reality of "hyperventilating" and "being hysterical."

Call it the Tucker Two-Step. It's Carlson's favorite strategy for normalizing ideas that are so fascist, ridiculous, or otherwise repulsive that even the notoriously gullible and authoritarian Fox News audience might balk.

First, Carlson does a provocative segment presenting his grotesque views, hoping to draw liberal outrage. When liberals inevitably condemn him, he follows up with a segment falsely equating criticism with censorship. He argues that the outrage is proof in itself of the validity of his claims, insisting that "they" wouldn't be so eager to "suppress" his ideas by, uh, arguing back vigorously.

His "liberals hate it so it must be good" logic is nonsense, of course. Otherwise, it would justify things like child molestation, slavery and genocide, all of which upset those on the left. Still, his audience is so addled by their singular desire to "trigger the liberals" that they ignore his fallacious reasoning.

And while Carlson is the master at playing the victim, the martyrdom strategy has spread. A growing number of right-wing pundits and politicians seek to flip the reality of what happened on January 6 on its head, turning the right into the victims instead of the perpetrators.

Over the weekend, CNN drew a great deal of condemnation on social media for an article about the death of Ashli Babbitt, who was shot by law enforcement after she entered the Capitol during the Jan. 6 riot. The article embraced a misleading "both sides" narrative, falsely equating those who want to turn Babbitt into a martyr with those who view her as a domestic terrorist, even though the video footage from the day made it quite clear Babbitt was at the front of a crowd that was attempting to run down fleeing members of Congress. As Simon Purdue from the Centre for Analysis of the Radical Right told CNN, Babbitt's death "is going to be used for many, many years" by right-wingers as "proof that a revolution is necessary." Unfortunately, this wisdom is buried in a sea of quotes from Babbitt's family and friends trying to buff her image and deny the truth of why she was in the Capitol that day.

It's doubly unfortunate CNN chose to go the false equivalence route because there's a deeper story here about how fascists and other authoritarians have a long history of propping up false martyrs, claiming the mantle of victimhood in order to justify their desire to victimize others and bring in new recruits. The most famous example is probably Horst Wessel, a Nazi and just generally worthless scumbag who enjoyed starting street fights with leftists in 20s-era Berlin. Wessel was killed by communists in 1930. Joseph Goebbels, then a party organizer and later Adolph Hitler's chief propagandist, turned Wessel into a martyr whose death was leveraged as an all-purpose excuse for any Nazi actions. The story was so central to Nazi mythology that a song about Wessel was even made into an official national anthem of Nazi Germany.

Today's American authoritarians want to use Babbitt for the same purposes.

Rep. Paul Gosar of Arizona — who stands out as one of the most fascistic Republican congressmen, a true feat in such a highly competitive field — has been at the forefront of turning Babbitt into a Wessel figure for Trumpism. During a congressional hearing last week, Gosar spun a ridiculous lie about how a Capitol police officer was "lying in wait" for Babbitt and then "executed" her. But, once again, the video footage from that day was clear: The insurrectionists were attempting to breach a barricade that police had hastily thrown up to give members of Congress an opportunity to escape and Babbitt was shot by an officer trying to hold the crowd back. Whatever criticisms one might have about the level of force used, it is indisputable that Babbitt was shot in response to a deliberate attempt to chase down people trying to run away.

Gosar is leaning into the same instinct that drives Confederate apologists and Holocaust deniers. It's why conservatives are always whining about "cancel culture," even though the evidence shows that they are the ones passing literal laws to silence teachers who wish to teach historical facts.

Carlson also got in on the action, shamelessly airing a clip of Russian President Vladimir Putin lying about the "assassination of the woman who walked into Congress. Carlson said Putin was asking "fair questions," which, of course, isn't true. Putin is trying to deflect attention from his own habit of ordering political assassinations, which Carlson almost certainly knows. And by playing the clip, Carlson is giving the game away, exposing how he shares Putin's authoritarian beliefs.

On Sunday, Fox Business host Maria Bartiromo hosted Republican Sen. Ron Johnson of Wisconsin on Fox News and continued the trend with a self-pity fest that denied the Capitol riot was a serious and violent attempt at a fascist insurrection.

"I've been trashed every day along the way," Bartiromo whined, and, posing as a brave freedom fighter, declared, "Keep trashing me. I'll keep telling the truth!"

But, of course, she is not telling the truth. She is lying, as is Johnson, and harping on how few guns were confiscated onsite in order to minimize the storming of the Capitol. Of course, that wasn't because the insurrectionists weren't serious, but because they were explicitly afraid that bringing illegal guns to Washington D.C. would mean getting arrested before they could attack. They (mostly) left their guns at home or in their cars as a strategic choice, meant to improve their chances of success. Bartiromo likely knows this, however, and is just lying to prop up this narrative where the insurrectionists are hero-victims instead of people who literally tried to overthrow democracy through violence.

From spinning conspiracy theories as "forbidden knowledge" to painting the insurrectionists as martyrs instead of villains, the right has clearly settled on a playing-the-victim strategy in order to rewrite the history of January 6.

What is even more disturbing is why they're doing this.

Justifying and minimizing the insurrection isn't just about the past, but the future. It's about encouraging more anti-democratic action and radicalizing more conservatives to the authoritarian cause. It's all propaganda, to turn the events of January 6 into a more serious and long-lasting effort to end American democracy.