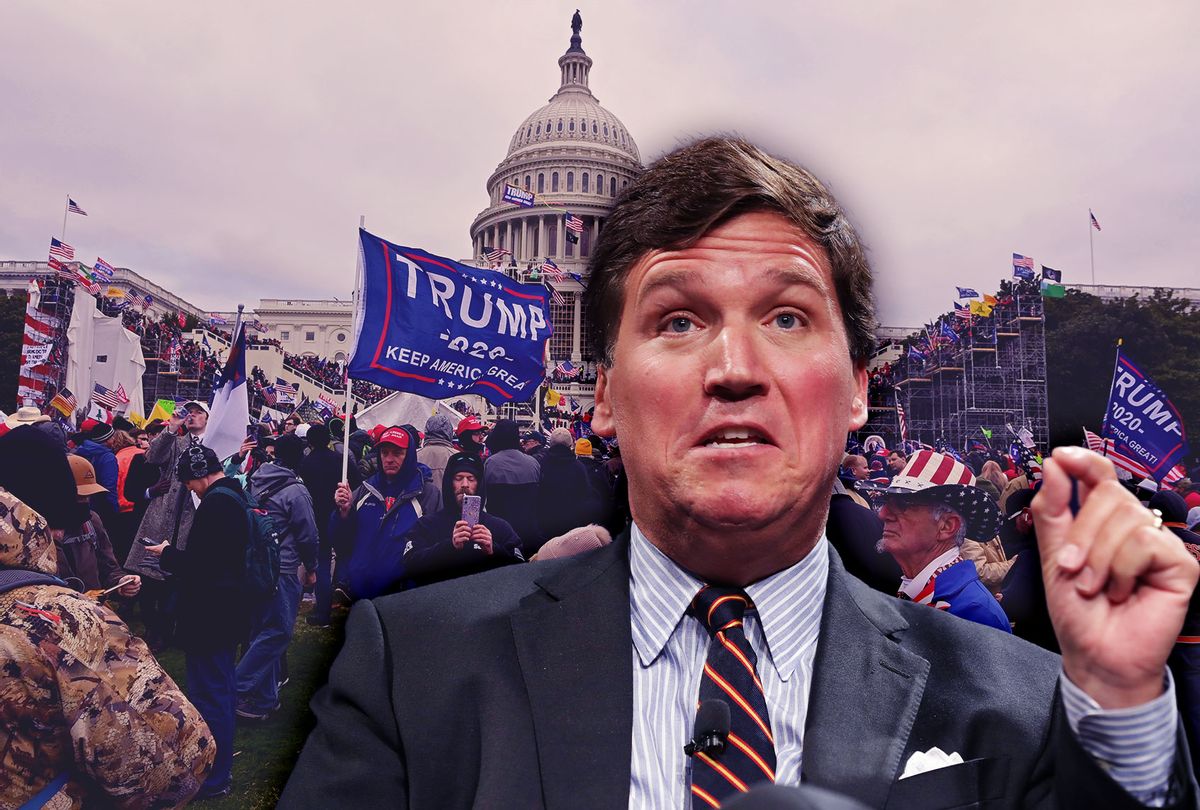 Fox News primetime host Tucker Carlson was quick to give air to a relatively new fringe theory that the January 6 Capitol riot was an inside job hatched and carried out by FBI operatives — and other conservatives pundits were even quicker to buy into the baseless claims.

On the Tuesday episode of his top-rated Fox News show, hours after military officials and FBI Director Christopher Wray testified before Congress, Carlson claimed that there remain a series of "basic factual matters" to which the nation still doesn't have answers stemming from the riot.

"Why is the Biden administration preventing us from knowing?" Carlson asked his audience before citing an article posted on the far-right website Revolver News, which was founded by disgraced Trump speechwriter and white nationalist conference speaker Darren Beattie.

The story penned by Beattie speculated that it wasn't fervent pro-Trump activists who breached the Capitol and took marching orders from Trump, but rather undercover agents of the federal government.

"Some of the key people who participated on January 6th have not been charged. Look at the documents. The government calls those people unindicted co-conspirators," the Fox host commented. "What does that mean? Well, it means that in potentially every single case, they were FBI operatives," Carlson concluded. "Really! In the Capitol on January 6th."

Conservatives were quick to pounce on the notion after Carlson's promotion of it.

"This is common sense," conservative commentator Candace Owens tweeted on Wednesday. "The most obvious clue that the DOJ was behind January 6th were the pipe bombs that were dropped off the night before by an anonymous person who the FBI claims to still be searching for."

Republican Congressman Matt Gaetz, who is currently embattled in a scandal, along with the Students for Trump founder Ryan Fournier billed the theory nothing less than a matter of fact while further pumping it out online to their respective massive followings.

But as numerous justice reporters have pointed out, Carlson is floating "Alex Jones-level" conspiracy theories on cable news.

Ryan Reilly, a senior justice reporter at The Huffington Post, remarked, "The entire basis of this segment is that unindicted co-conspirator = FBI informant, which is anyone with even a rudimentary understanding of federal investigations understands is an absurd premise."

"Tucker Carlson descends into Alex Jones-level territory while publicizing his complete ignorance about what an 'unindicted co-conspirator' is," Adam Klasfeld, an editor at Law and Crime, replied on Twitter to the Carlson theory.

As for the theory pushed by Carlson, that idea has long been debunked, dating back to a mere few days after the riot on January 11 when the Associated Press headlined a report, "Who were they? Records reveal Trump fans who stormed Capitol."

Jared Holt, a fellow at The Atlantic Council's Digital Forensic Research Lab, called out Republicans over the hypocrisy on full display by calling the Capitol riots an "inside job," but not supporting a congressional commission to dig into what occurred that dark day in Washington D.C.

Others also called out the Carlson commentary via Twitter: