Why is "liberal" media pushing an "America First" message and a new Cold War?

Did the media learn nothing from the Trump years? Pushing Biden to confront Russia and China will invite disaster 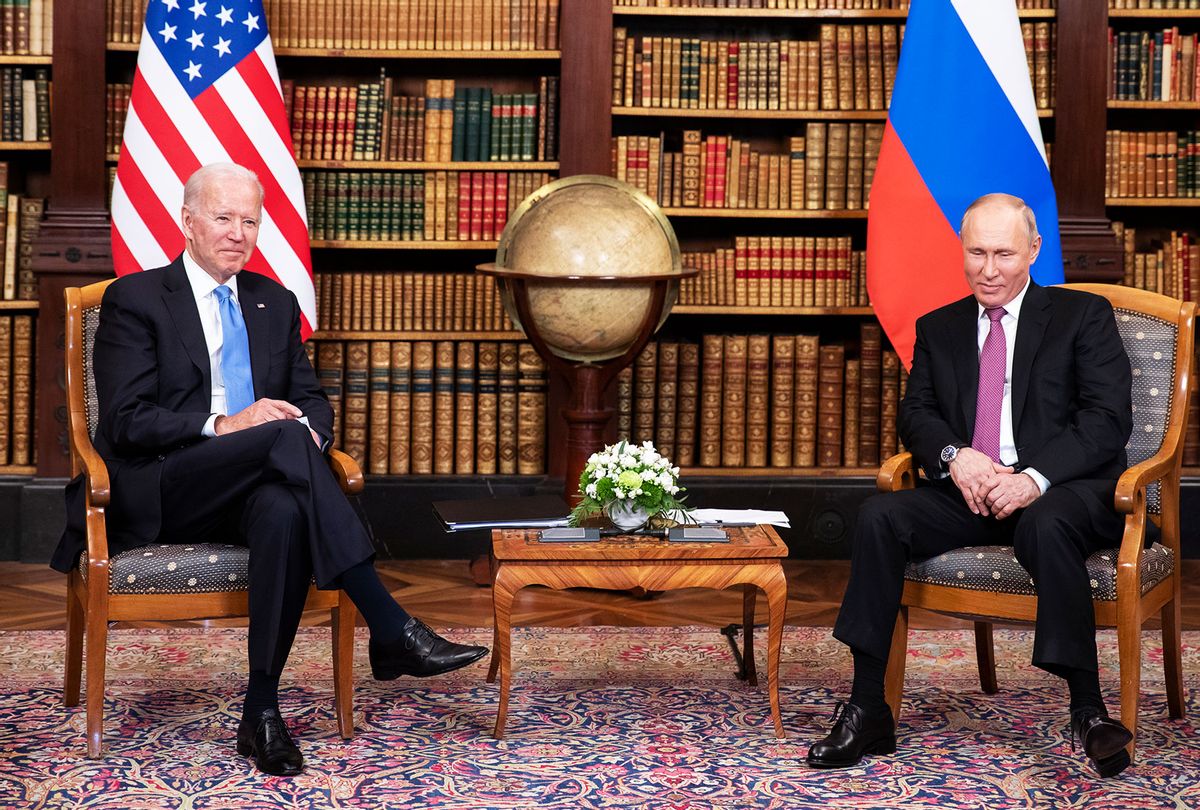 If you get your foreign policy news today from CNN or MSNBC or NPR or similar outlets, then you're bombarded hour after hour with the idea that the United States has the absolute right to impose sanctions on country after country overseas if they violate human rights or are not democratic.

To give just one example: On Sunday, CNN anchor Dana Bash grilled Biden's national security adviser, Jake Sullivan, on why the White House is not imposing yet more sanctions on Russia (and China) and why Team Biden was "giving in to Russia" on the gas pipeline to Western Europe. Sullivan was emphatic in insisting that sanctions had been imposed and more were on the way, boasting that Biden had grabbed even more presidential power to sanction Russia through an executive order.

I'm old enough to remember the superiority complex behind the liberal media propaganda during the Cold War with the Soviet Union — while U.S. foreign policy, in the name of democracy, massacred millions of people of color, mostly civilians, across the globe from Asia to Southern Africa to Latin America.

In the middle of the Cold War, when Martin Luther King Jr. denounced the U.S. government as "the greatest purveyor of violence in the world today" and criticized U.S. hubris fueling the Cold War, liberal outlets like the New York Times and the Washington Post furiously condemned King — in essence, telling him to leave foreign policy to "us white guys."

When it came to relations between nations, King criticized the "arrogance" of our country and the West in "feeling that it has everything to teach others and nothing to learn from them."

Jump to the present, and you see the same arrogance in liberal U.S. media: We have everything to teach others — whether Russia or China or Iran or Venezuela or any of the dozens of countries the U.S. is imposing sanctions on, sometimes deadly sanctions.

Let's do today what MLK urged us to do back then: Look at ourselves in the mirror.

There is no more precious human right than the right to be free from jail or prison. So it's a human rights violation of epic proportions that the United States has more than 2 million people incarcerated, way more than any other country, including China with its much huger population. Our people behind bars are disproportionately Black or brown people. Liberal media have recently learned how to throw around the term "systemic racism," but when lecturing other countries they deftly forget that mass incarceration is an affront to notions of "democracy" and "human rights."

It's a human right to be able to live without the fear of violence. Yet no other major country has so much gun violence, with hundreds shot every day — one of many problems that U.S. "democracy" can't even address, let alone solve.

One might have hoped that recent U.S. history would have humbled liberal media pundits about their cherished belief in the U.S. as a "beacon of democracy" to the world — and therefore, our sacred right to punish other countries that don't measure up.

After four years of Trump and a Trump movement that has captured almost half the electorate, after our corporatized media system lavished massive amounts of free airtime on candidate Trump in 2015 (CNN, CBS, ABC, etc.) because it was good for network profits, after years of a dysfunctional political system in Washington that serves the rich and giant corporations when not in total gridlock, after the Supreme Court was packed with right-wing judges through legislative double-dealing, after ever-increasing voter suppression targeting people of color and young voters, one would hope for some humility about "U.S. democracy."

Yet liberal media pundits keep propagandizing the public about the USA's right to lecture foreign countries over their political systems, and to severely punish them (leaving aside allies like Colombia, Saudi Arabia and Israel, of course). Never mind the horrific consequences to civilians overseas when deprived of life-sustaining imports.

These liberal news outlets may despise Trump, but they sure put "America first" when it comes to policing the rest of the world. And they seem intent on instigating new cold wars with Russia and China.

It's indefensible that Putin has imprisoned and nearly killed opposition figure Alexei Navalny, and it's important for the U.S. government to publicly and privately speak out against such behavior. The same goes for China's terrible mistreatment of Uyghur Muslims. But while speaking out with self-awareness and humility about human rights, the U.S. also needs to work collaboratively with Russia on cyber-peace and disarmament (the two nations have 90 percent of the world's nuclear weapons) and with China on climate change. Without collaboration, the world is doomed.

The liberal view on the original Cold War with the Soviet Union is that "we won." The progressive view is that everybody lost, especially Global South countries like Vietnam, Iran, Indonesia, Guatemala and El Salvador that were victimized by U.S. invasions, coups and proxy wars supported by both Democrats and Republicans.

I have a bold idea you won't hear on CNN or MSNBC: Instead of lecturing and sanctioning the rest of the world, let's get our own house in order. Let's lead by example. On democracy, instead of sanctioning other countries, Team Biden should rally Democrats to sanction the U.S. Senate by establishing majority rule through an end to that Jim Crow legacy, the filibuster. And Biden should address the right-wing-packed Supreme Court.

On human rights, let's cut the U.S. military budget in half, and provide things that other advanced countries already have: universal health care and free or near-free higher education. Let's invest billions of dollars in poor and working-class communities, and end the horrors of mass incarceration. Let's cancel student debt that burdens 45 million people and, at long last, seriously tax U.S. oligarchs and corporations to pay for these investments (and perhaps worry less about sanctioning Russian oligarchs).

Joe Biden likes to think of himself as a foreign policy specialist. If he listens to the laptop warriors in the media who want him to "pivot" belligerently toward China and Russia, an adventurist foreign policy will undermine the Democrats' domestic agenda and doom his administration quicker than you can say "LBJ." And Republicans will retake Congress.

Biden can succeed only if he ignores the media hawks and focuses laser-like on domestic policy — galvanizing his party toward a serious FDR-like effort to address human rights and climate change with major federal programs uplifting working-class people of all colors.