Yes, Trump should be "thrilled" by this week's news — indictments and all

Donald Trump is reportedly happy about the indictments against his company 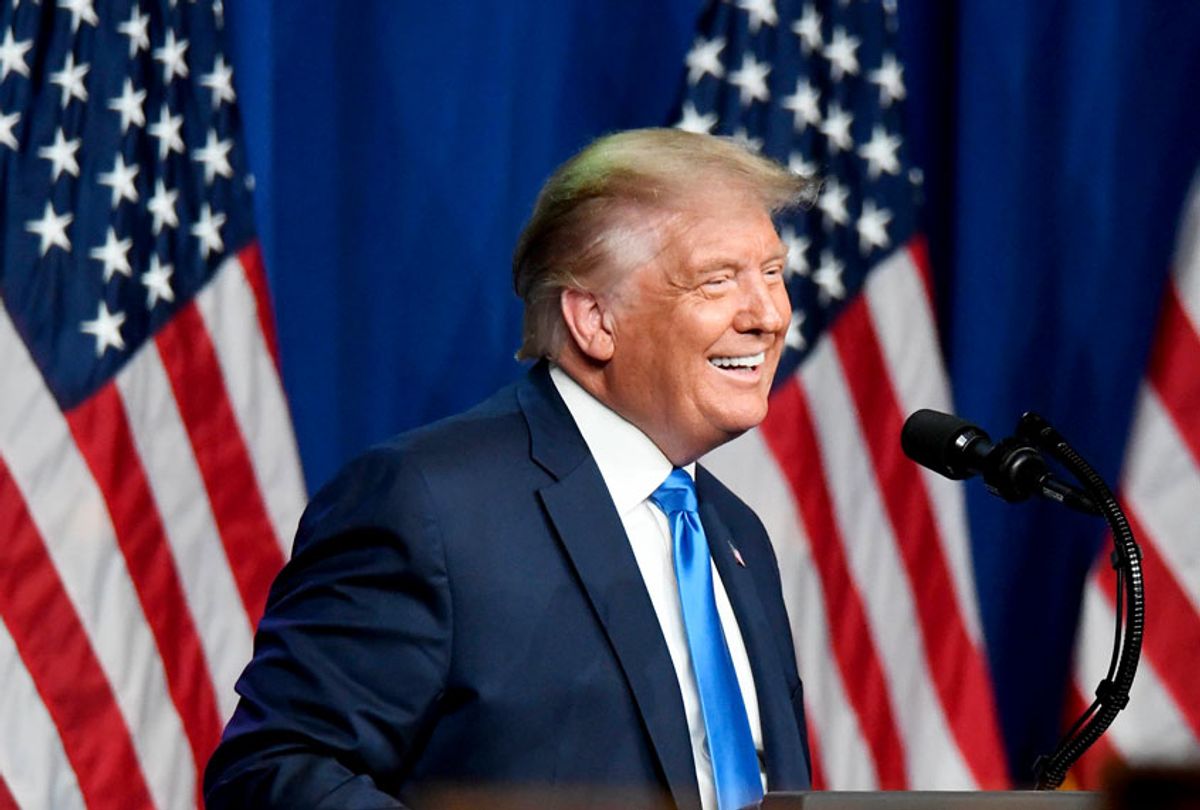 Donald Trump's company and its chief financial officer were indicted on Thursday on multiple felony counts and the prosecutors went to some lengths to say they weren't finished yet. In a sane world, one would think that presents a real problem for a man who is planning to run for president but this is Trump we're talking about and he's survived dozens of legal challenges as a businessman and as a politician so it's a fairly good bet he'll wriggle out of this one too. After all, in the last 18 months, he's been impeached twice, botched the handling of a historic global pandemic resulting in more than 600,000 American deaths, incited an insurrection against the U.S. Congress, and his supporters love him more than ever. He famously said he could shoot someone on 5th Avenue and not lose any votes and it appears to literally be true.

This is probably why he is reportedly happy about the indictments, "thrilled" they are what he thinks of as light charges, and already anticipating how the cases can be leveraged for his big comeback in 2024 because it will "hurt Sleepy Joe." He plans to make this latest "witch hunt" a theme of his upcoming rallies and since his political career has been built upon relentless whining, which his followers eat up with a spoon, he may just be right.

Since January 6th, there is a very powerful, unspoken threat should any real danger to Trump and his future plans present itself: violence. It's doubtful that anyone involved in these or any other cases aren't constantly weighing the risks against the benefits in taking steps to hold Trump accountable. He's gotten away with so much that even grounded, rational people have to be asking themselves if he's literally made a deal with the devil.

According to Politico, people around him say that while he has been spending some time at Trump Tower (since he's summering at his Bedminster Golf Club) and has been concerned about these cases, it's far from his top priority.

Aides said that Trump's interest in the Manhattan D.A.'s case pales in comparison to his obsession with the idea that he could still prove to be the winner of the 2020 election. "His world is seriously consumed by that," said another Trump adviser. "In comparison to election fraud, [the D.A.'s investigation] is not even close." According to this adviser, Trump is holding out hope that if the Arizona "audit"/fishing expedition ends up in his favor, a few other states will follow suit, triggering some sort of legal process that would make him president.

He's even questioned the merits of the Constitution, if it can't be used to investigate election fraud.

He must have been awfully pleased to see that the Supreme Court seemed to agree with him, at least to the extent that states should be able to make it as hard for people to vote as possible, ostensibly to protect itself from voter fraud, which doesn't exist. Thursday's ruling on the voting case Brnovich v. DNC, from Arizona, ground zero for Trump's Big Lie hysteria, with the full conservative bloc coming together to further weaken the Voting Rights Act, must have made his day.

The court upheld a series of voter restrictions much like the ones that are popping up all over the country in the wake of Trump's Big Lie, although it did not, as was feared, completely eliminate all barriers to such restrictions. It did create a new set of criteria for determining if a voting law is discriminatory, one of which seems to say that any restrictions which may have been in place in 1982 (when the Voting Rights Act was amended) are acceptable. (I guess this is yet another form of "originalism?") The majority opinion cites this example:

"it is relevant that in 1982 States typically required nearly all voters to cast their ballots in person on election day and allowed only narrow and tightly defined categories of voters to cast absentee ballots."

So much for mail-in voting.

That opinion was written by Samuel Alito, a sure signal to the GOP establishment that this one was for them. (Alito is, by far, the most flagrantly partisan justice on the Court.) This decision, which endorses the idea that states can restrict voting because of (non-existent) voter fraud, is solely a Republican Party project. This decision makes it clear that while this court may throw a bone to the left once in a while when it comes down to securing power for the Republican Party, their allegiance is certain. Mitch McConnell must have strained a muscle patting himself on the back for his efforts to make that happen.

At this point, the entire Republican establishment, which includes the Supreme Court majority, is working together to take advantage of the opening Trump's Big Lie has given them. The party strategically targeted the states that Biden won closely and is feverishly passing laws to disenfranchise Democratic voters there. At the same time, they are assiduously working to disempower any form of non-partisan oversight of the election apparatus. In fact, they are using every lever of power at their disposal, from legislative control in the states, to the filibuster and the Supreme Court.

Yet even in light of that, the Democrats are saying that any changes to voting laws must be bipartisan and are letting the GOP get away with obstructing voting legislation for the dumbest possible reason: they think they need to hold on to the filibuster to stop Mitch McConnell and a future GOP president from doing things they don't like in the future. As if McConnell and the Republicans haven't made it crystal clear that they will do as they like by any means necessary. If Republicans need to nuke the filibuster in the future they will not hesitate to do it. In fact, they may do it just to troll the libs the minute they get back the majority.

The consensus among the political press is that this battle is over.

CNN's Senior White House correspondent Phil Mattingly insisted on Thursday that the handful of Democrats who believe this drivel are not going to change their minds and the rest of the party is accepting their fate, with the White House planning to fall back on the "bully pulpit" to tell people how they might avoid the undemocratic roadblocks the Republicans are putting in their way.

That's right. The party that controls the House, the Senate and the White House apparently believes it is impotent to protect American democracy from a bunch of right-wing crazies who worship Donald Trump so they're planning to give some speeches instead.

If this cynical consensus is right (and I fervently hope it isn't) all I can say is that it's a good thing we have an empathetic mourner-in-chief in Joe Biden to comfort us when our democracy finally dies. Unfortunately, we probably won't be able to hear his consoling words over the giddy laughter of Trump and the Republicans. They couldn't have dreamed the Democrats would go down so easily.