When conservatives play the victim over satire: It's only "free speech" when they're making jokes

Satire has been bothering the right lately. They can't decide if they want to defend it or attack it 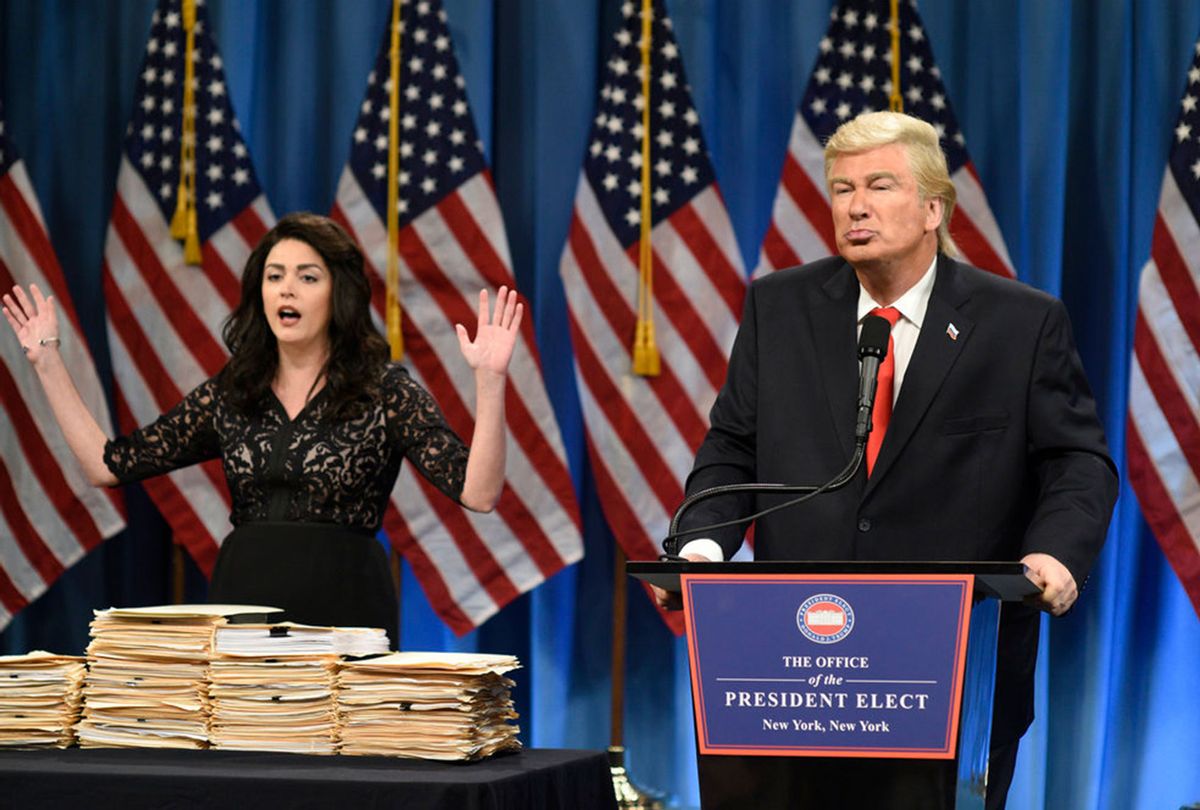 Cecily Strong as a lawyer and Alec Baldwin as President Elect Donald J. Trump during the Trump Press Conference Cold Open on January 14th, 2017. (Will Heath/NBC)
--

Satire has been bothering the right more than usual lately. The catch is that it seems they can't decide if they want to defend it or attack it. First, the right-wing satirical site The Babylon Bee, a conservative version of an Onion-style comedy-news publication, made headlines when it demanded the New York Times correct a claim that the site promotes misinformation behind a guise of satire. Then we learned that Donald Trump had actually asked advisers and lawyers to investigate whether the Department of Justice could probe or mitigate sources of satirical late-night comedy, like "Saturday Night Live," that made fun of him.

What's sort of fun to watch is the whiplash performed when the right expresses outrage in both directions. For example, Seth Dillon, CEO of the Babylon Bee, made a classic free speech, anti-censorship argument when he complained about Facebook possibly limiting the circulation of their posts. "It's people in positions of power protecting their interests by telling you what you can and cannot joke about. Comedians who self-censor in deference to that power are themselves a joke," he wrote.

Funny to think that that same comment could have been used to defend Stephen Colbert when he was hammered for "going over the line" in his roast of George W. Bush back in 2006.

On the one hand, the Babylon Bee argues that the left — the umbrella under which the right assumes the mainstream media and Big Tech fall — is trying to censor and police their satire. On the other hand, Trump actually did try to censor satire because he was freaked out that he was being mocked.

The buzz over the Babylon Bee stems from the debate over whether the site is — depending on who you are and how you read it — hate-speech masquerading as comedy, deliberate misinformation, or actual right-leaning satire. (Dillon says the latter.) But what's more interesting is how the arguments made in its defense are quite similar to the ones that have been made to defend satire critical of the right, and especially Donald Trump.

And yet, for the most part, conservative pundits have either sidestepped responding to Trump's desires to censor satirical comedy critical of him or have defended him. After a 2018 segment on "SNL" that riffed on "It's a Wonderful Life" and suggested that everyone would be happier if Trump weren't re-elected, there was quite the stir. Essentially, the argument was in the reverse from what is being said to support the Babylon Bee. In defending Trump, the arguments were that Trump satire needed to be reined in because it was too one-sided, too negative and possibly too successful at affecting his image.

For example, Trump himself took to Twitter to complain, "A REAL scandal is the one-sided coverage, hour by hour, of networks like NBC & Democrat spin machines like Saturday Night Live. It is all nothing less than unfair news coverage and Dem commercials. Should be tested in courts, can't be legal? Only defame & belittle! Collusion?" And his anxieties led to debates over what conservatives should do to defend themselves against liberal bias in late-night comedy.

The fact that Trump would melt down after he saw satire critical of him was news enough, but we later found out that Trump did more than complain; he actually looked into whether he could find other avenues to restrict political comedy targeting him. As Asawin Suebsaeng and Adam Rawnsley reported for the Daily Beast, "According to two people familiar with the matter, Trump asked advisers and lawyers in early 2019 about what the Federal Communications Commission, the court system, and—most confusingly to some Trump lieutenants—the Department of Justice could do to probe or mitigate SNL, Jimmy Kimmel, and other late-night comedy mischief-makers."

This story is all the more noteworthy for its coincidence with the Babylon Bee censorship brouhaha. Where were the defenders of the Babylon Bee when Trump was literally asking for late-night comedy shows to be restricted in their jokes about him? If the argument is that comedy should never concede to power, then surely Seth Dillon would be outraged over the story that Trump considered having the DOJ, the FCC and the courts look into ways to limit satire.

The Babylon Bee's claim of discrimination stems from a line in a New York Times article, which was subsequently edited, and the site's allegation that their content is being restricted on social media platforms like Facebook, which has had a notoriously difficult time figuring out what to do with satire anyway. Comedians on both the left and the right deal with having their posts removed because, despite attempting to create community rules, Facebook is ill-equipped to process irony and often takes satirical posts as literal.

But the Babylon Bee's complaints of censorship fit the pattern of a broader right-wing victim rhetoric that suggests their views are being silenced even when there is considerable proof this is not the case. We hear ongoing cries of conservatives being silenced on social media — often surrounding the launch of yet another social media network claiming to be a haven for "free speech" — but in reality, the right rules online. Politico tracked millions of social media posts on Facebook, Instagram and Twitter and found that "Right-wing social media influencers, conservative media outlets and other GOP supporters dominate online discussions." Working with the Institute for Strategic Dialogue, a London-based nonpartisan think tank that tracks extremism online, Politico found that "a small number of conservative users routinely outpace their liberal rivals and traditional news outlets in driving the online conversation."

What's even funnier (and concerning) is the fact that most of the cries that social media discriminates against the right are simply anecdotal. Stories of one tweet taken down, one post on Facebook removed, etc., don't line up with data. If anything, it's the reverse: The more that the right whines that they are being censored, the more bandwidth their whines receive on platforms. Even more disturbing is how their stories of being censored have shaped public perceptions. A 2020 Pew Research study found that most Americans believe social media sites censor political views, with 90 percent of Republicans saying that they believe that social media censors them.

The hypocrisy over the right's reaction to censoring satire reveals their consistent position that they are victims. The victim narrative is the common denominator. The right constantly argues that they are being discriminated against, whether because someone is making fun of them or someone is not letting them make fun of them. For those of us who really love satire, the irony of that twisted logic is both pretty funny and pretty disturbing.