"Outnumbered": White evangelicals find themselves on the decline

A study in 2020 found there were more Mainline Protestants than White evangelicals in the U.S. 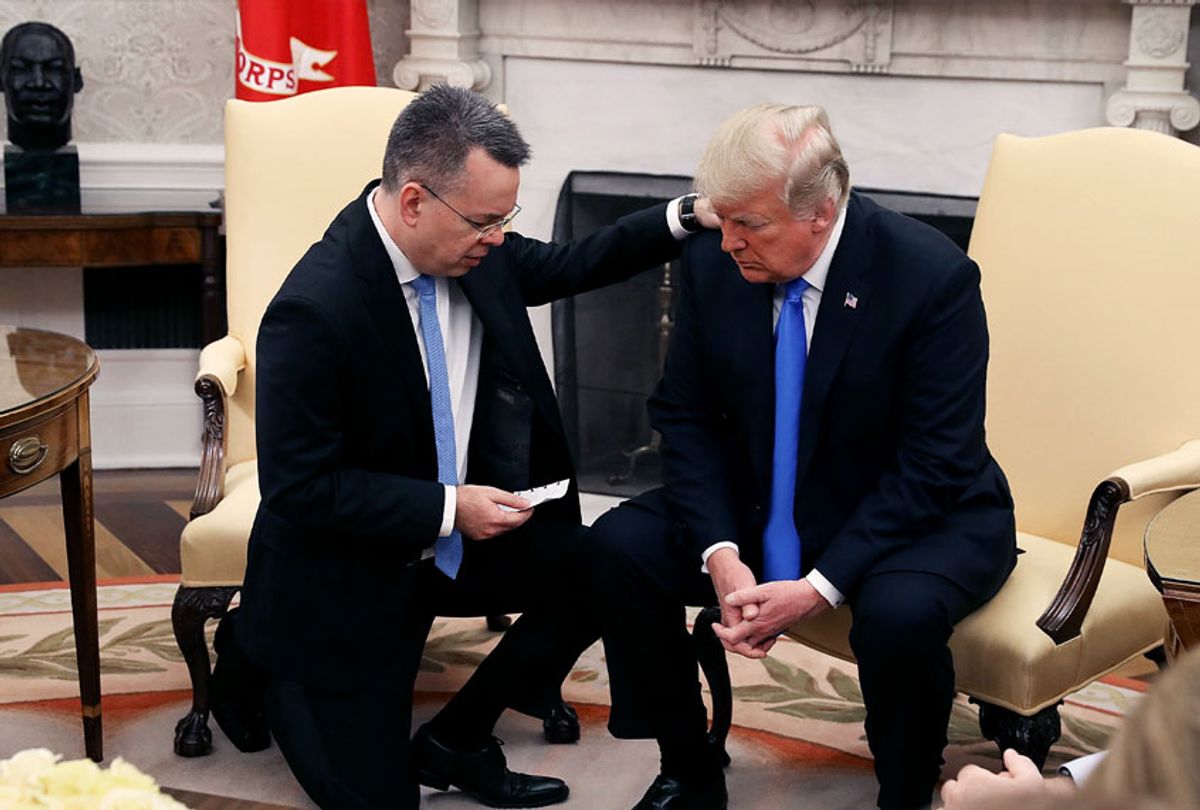 U.S. President Donald Trump and American evangelical Christian preacher Andrew Brunson (L) participate in a prayer in the Oval Office a day after Brunson was released from a Turkish jail, at the White House on October 13, 2018 in Washington, DC. Brunson was detained for two years in Turkey on espionage and terrorism-related charges that the pastor said were false. (Mark Wilson/Getty Images)
--

Some non-evangelical Christians — from Mainline Protestants to moderate Catholics to the African Methodist Episcopal Church — absolutely cringe whenever the Christian Right says or does something racist, misogynist, anti-Semitic or homophobic, as they realize that it turns young Americans off to religion. Countless Millennials and members of Generation Z have said that if far-right White evangelicals are the face of Christianity, please count them out. Liberal New York Times opinion writer Michelle Goldberg, in a column published on July 9, emphasizes that the Christian Right has lost a lot of ground since George W. Bush's presidency during the 2000s.

Goldberg explains, "The presidency of George W. Bush may have been the high point of the modern Christian right's influence in America. White evangelicals were the largest religious faction in the country…. But the evangelicals who thought they were about to take over America were destined for disappointment."

Mainline Protestants are non-fundamentalist, non-evangelicals Protestants such as Lutherans, Episcopalians, Presbyterians and Methodists or members of the AME Church — a Black denomination that, in contrast to the far-right politics of the White evangelical movement, has a long history of supporting liberal and progressive causes.

"PRRI's 2020 Census of American Religion, based on a survey of nearly half a million people, shows a precipitous decline in the share of the population identifying as White evangelical, from 23% in 2006 to 14.5% last year," Goldberg observes. "As a category, 'White evangelicals' isn't a perfect proxy for the Religious Right, but the overlap is substantial. In 2020, as in every year since 2013, the largest religious group in the United States was the religiously unaffiliated."

Goldberg continues, "One of PRRI's most surprising findings was that in 2020, there were more White Mainline Protestants than White evangelicals. This doesn't necessarily mean Christians are joining mainline congregations — the survey measures self-identification, not church affiliation. It is, nevertheless, a striking turnabout after years when Mainline Protestantism was considered moribund and evangelical Christianity full of dynamism. In addition to shrinking as a share of the population, White evangelicals were also the oldest religious group in the United States, with a median age of 56."

One person who did a lot to turn people off to the Christian Right and the White evangelical movement is former President Donald Trump. Although Trump was raised Presbyterian in Queens, he was never known for being a devoutly practicing Christian or for being especially religious. Trump is really an agnostic even if he claims otherwise, and his relationship was the Christian Right was one of convenience. Many Americans looked at the Trump/Christian Right relationship and either became agnostics or embraced non-evangelical forms of Christianity.

Goldberg points out that during the George W. Bush years, Generation Joshua — a far-right evangelical group that pushed for home schooling — was optimistic about the future of the evangelical movement. But the PRRI survey, according to Goldberg, doesn't give that movement any reason for optimism. And she concludes her column on an ominous note, fearing that the more the Christian Right feels they are losing the Culture War, the more dangerous they could become.

The columnist writes, "White evangelicals probably aren't wrong to fear that their children are getting away from them…. I was frightened by the Religious Right in its triumphant phase. But it turns out that the movement is just as dangerous in decline. Maybe more so. It didn't take long for the cocky optimism of Generation Joshua to give way to the nihilism of the January 6 insurrectionists. If they can't own the country, they're ready to defile it."