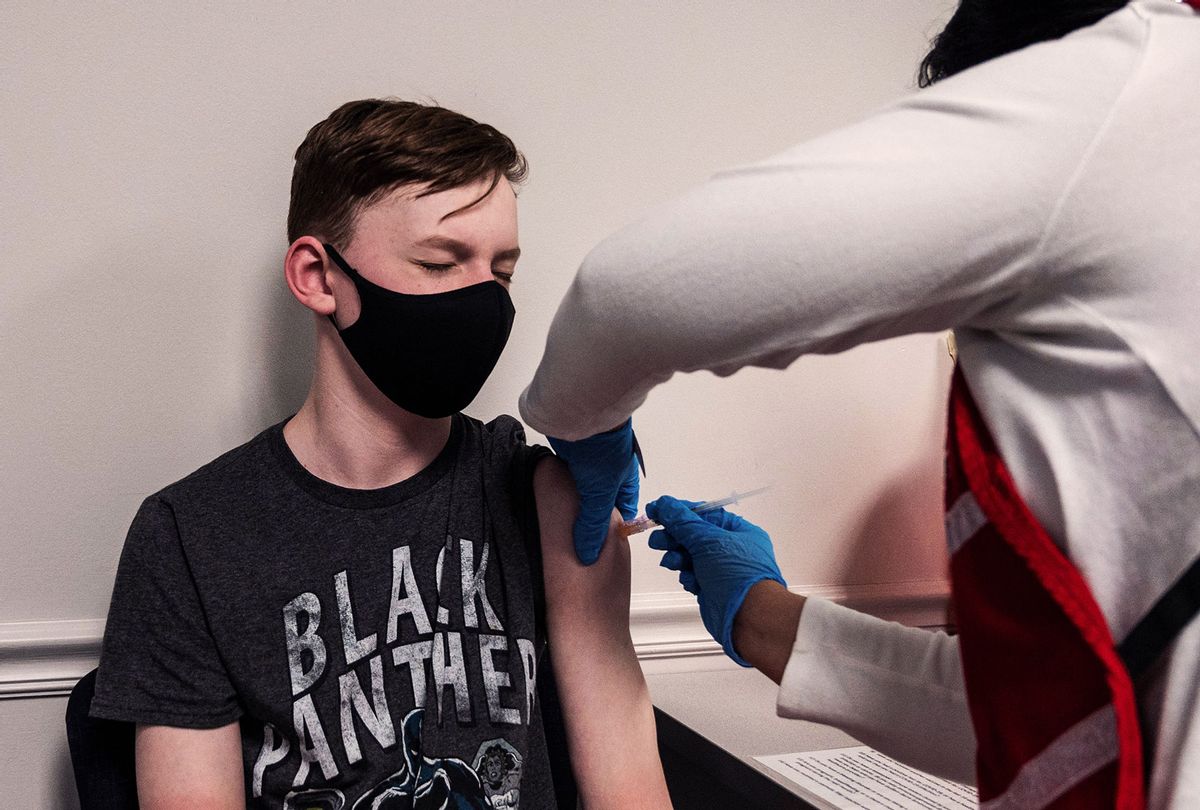 Luke Allan, 13, closes his eyes as he gets a Covid-19 vaccination. The campaign to immunize America's 17 million adolescents aged 12-to-15 kicked off in full force on May 13, a key part of President Joe Biden's strategy to push the country close to herd immunity. (ANDREW CABALLERO-REYNOLDS/AFP via Getty Images)
--

The Tennessee Department of Health is set to discontinue its outreach programs for vaccinations amongst adolescents, marking a decisive win for state Republicans who have repeatedly sowed vaccine hesitancy amongst residents of the state.

According to an internal report and leaked agency email obtained by the Tennessean, the department will halt all vaccine-related events at schools, which were previously used as coronavirus vaccine drives.

In a number of rural towns throughout the state, school gymnasiums are one of the few sites able to host indoor vaccine drives because they are air-conditioned and provide ample space for social distancing.

Additionally, the Tennessee Department of Health is now prohibited from sending teenagers postcards that remind them to receive their second dose. Instead, vaccine-related mail will be sent to their parents over fears that doing otherwise would constitute "solicitation to minors." Health Commissioner Dr. Lisa Piercey told staff to remove the department's logo from any materials that disseminate information regarding vaccinations.

"Tennessee is on solid footing when it comes to childhood immunizations and will continue to keep information and programming in place for parents," a department spokesperson told The Tennessean.

However, these changes, first outlined in a department report on Friday, come amid a recent surge in infections. Over the past two weeks, the average number of new daily cases jumped from 177 to 418, as the Tennessean noted. Additionally, the average test positivity rate has leapt from 2.2% to 5.4%. According to state health data, the incidence of the delta variant rose in the Volunteer State from 27 on June 24 to 125 as of last Thursday.

Meanwhile, the rate of vaccination in Tennessee is hovering around 38% – a whole 14% less than the national average.

The department's new directives come on the heels of a long-simmering battle between state conservatives and the department's former medical director for immunization, Dr. Michelle Fiscus.

Fiscus, who fought for a higher rate of vaccination amongst teens, was mysteriously fired on Monday, though she alleges that her ouster was a "reprehensible" attempt to appease Republican lawmakers.

"This is a failure of public health to protect the people of Tennessee and that is what is 'reprehensible,'" Fiscus said Monday. "When the people elected and appointed to lead this state put their political gains ahead of the public good, they have betrayed the people who have trusted them with their lives."

She added: "It was my job to provide evidence-based education and vaccine access so that Tennesseans could protect themselves against COVID-19. I have now been terminated for doing exactly that," she wrote in a statement.

Her firing comes just after an acrimonious hearing back in June, in which the department's health commissioner was chided by state Republicans for its vaccine outreach programs to youths in the state. During the hearing, Republicans also threatened to shut the entire department down, prompting it to quickly pull its social media vaccination campaigns.